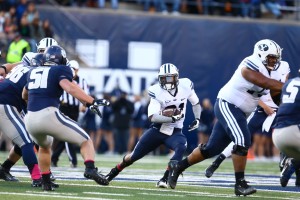 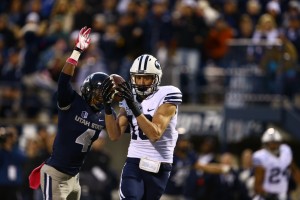 Sophomore receiver Mitch Mathews had a break out game for the Cougars scoring three touchdowns on the night. (Photo by BYU Athletics.)

LOGAN — The BYU defense started fast and the offense finished hard, cruising to a 31-14 win over Utah State Friday night to take home the Old Wagon Wheel for the third straight year.

All-American Kyle Van Noy intercepted Utah State quarterback Chuckie Keeton on the first play of the game, returning it 17 yards for a touchdown to take a 7-0 lead 10 seconds into the game. Head coach Bronco Mendenhall said the opening play was just what was needed.

“We really focused on the ball not being able to go around us or over the top of us,  and then try to knock as many balls down as possible,” Mendenhall said. “Kyle started that right from the beginning which was an awesome start.”

The play set the tone for a stifling defensive performance which set up a surprising offensive development – the emergence of the Cougar passing game. Taysom Hill went 17-31 for 278 yards and three touchdowns – all to Mitch Mathews. Hill was not surprised with the team’s performance, saying he knew they had it in the arsenal.

“I always knew we had the potential to do something like this,” Hill said. “I was just waiting for it to happen. They dared us to throw the ball, so we did.”

Utah State scored its only first half touchdown on a 7-yard pass from Keeton to Travis Van Leeuwen after Hill fumbled on a quarterback sneak inside the BYU 20.

But then everything went wrong for the Aggies, starting with Keeton going down with a nasty knee injury near the end of the first quarter. Scrambling on a third down, Keeton planted his left leg in the turf and got twisted up in the tackle. He left the game, returning to the sidelines on crutches. He will undergo an MRI to assess the damage, but Utah State officials fear the worst, initially calling it a tear of both the ACL and MCL. Hill, who tore a ligament in last season’s game against the Aggies, said he feels for the junior quarterback.

“I feel for the guy,” Hill said. “I hurt my knee in this game last year. I hope he can return to the team later this season.”

Hill and Mathews hooked up for a 30-yard touchdown strike in the second quarter to take the 17-7 lead into the break. The touchdown  catch was Mathews’ first of his career, but he would add two more in the second half, capping off the hat trick.

The first came on the Cougars’ first drive of the second half, when Hill threw a back shoulder fade to the corner of the end zone where the 6’6” Mathews pulled it down. The third and final hookup came when the Aggie secondary lost sight of Mathews, allowing the two sophomores to connect on an easy 43-yard score. Hill said Mathews is only showing what he is capable of.

“(Mathews) and I are friends on and off the field,” Hill said. “I’m not surprised by what he did today. We saw this during fall camp and spring ball.”

Harrison threw an 8-yard touchdown to Ronald Butler with just more than a minute to play, but the BYU damage was done.

The Cougars return to Provo to take on Georgia Tech for the homecoming game on Oct. 12.