Local ‘unicorn’ snags spot on ‘The Price is Right’ 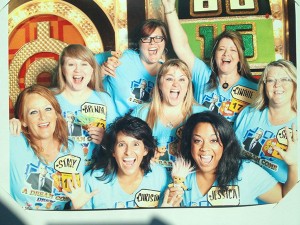 Jessica Villeneuve, front row on the right side, poses with her friends before competing on “The Price is Right.” Villeneuve will be in the episode that airs on Monday, Oct. 7 at 11 a.m. on CBS.

American Fork resident Jessica Villeneuve grew up watching “The Price is Right” and heard Bob Barker’s famous invitation to “come on down” countless times. But on Aug. 19, host Drew Carey extended that invitation directly to her.

“It was an incredible experience,” Villeneuve said. “It was a lot of fun and there was so much energy.”

Villeneuve flew to California with some friends, and they decided to try and get on the show. They got in line at 5 a.m. and waited for three hours with their troll dolls and “I dream of Drew” T-shirts in an attempt to get noticed and selected.

Once seated in the studio, a show employee asked Villeneuve why she thought she should be on the show. She said she gave an answer, but when the employee started to move on to ask other audience members, she thought of a better answer.

“As he was was walking away, I said, ‘Let me tell you why you should pick me,'” Villeneuve said. “‘You should pick me because I’m black and I’m from Utah. I’m like a mythical unicorn.'”

Not an hour later, her name flashed up on the screen, and she was on her way down the aisle for a chance to win on “The Price is Right.”

“It was so exciting,” she said. “Drew Carey is really funny and actually more handsome in person.”

Villeneuve will be in the episode that airs on Monday, Oct. 7 at 11 a.m on CBS. She plans to watch the episode at home with her mother, husband and children.

“I’m a little nervous to watch it because it was such an out-of-body experience that I don’t remember how I acted,” she said. “But I’d do it again in a second. … It’s an experience I’ll never forget.”

LDS general conference: The tweets, the memes and the fly Next post