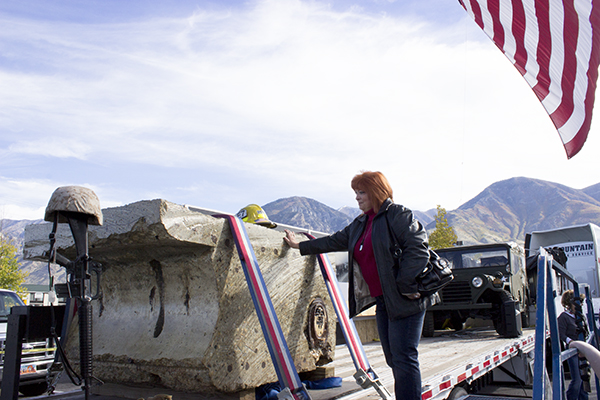 Suzanne Wagstaff pauses at the “UT 6 and All” memorial. Her son, Chief Warrant Officer 3 Matthew Gabriel Wagstaff, was killed in Afghanistan on Sept. 21, 2010.

For nearly 50 years, the slurry wall by the World Trade Center had one purpose — to prevent the nearby Hudson River from flooding the area. But since the 9/11 terrorist attacks, the slurry wall has become much more. Now, it is a memorial to the soldiers that have been killed defending the United States, and a section of the wall found its permanent home in Utah.

The wall has become a memorial because it was the only part of the area surrounding the World Trade Center  that held strong during the attacks. Had the wall failed, floods from the river could have caused additional damage and fatalities. The wall was  removed to accommodate the transportation needs as crews rebuild the World Trade Center, and was divided into pieces for a 9/11 memorial. 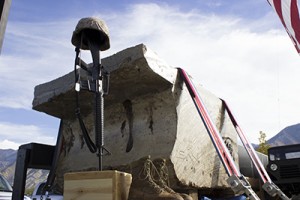 The “UT 6 and All” memorial is a section of a slurry wall that held fast during the 9/11 attacks. It honors fallen military men and women in Utah. (Photo by Alisha Gallagher)

Raette Belcher, the chairperson for the Utah Fallen Warriors organization, said she wanted to bring a piece of the slurry wall to Utah because it symbolizes strength and resilience in difficult times.

“The slurry wall has stood firm in our nation’s soil since 1962,” Belcher said in a speech on Monday. “It did not give way, it did not crack, it did not fall. I wanted something strong like this rock to represent … what the United States of America is all about. We are a strong nation.”

The section of slurry wall is 9,000 pounds, 60 inches tall and 62 inches wide, and was polished and refined by Florida artist Sandra Priest. It has been named the “UT 6 and All” to honor six particular military individuals who were killed near 9/11 as well as all Utah military men and women who have been killed in the ensuing years.

During a Monday event that commemorated the memorial, Provo Deputy Fire Chief Tom Augustus said it is poignant to think of the memorial as a work of art.

“The artist … created art out of tragedy,” said Augustus. “She worked to create something that all Americans can embrace as we continue to heal our country.” 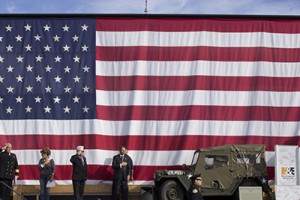 Speakers at the commemoration event pause while the colors are posted. Provo Mayor John Curtis, right, spoke at the event. (Photo by Alisha Gallagher)

Suzanne Wagstaff, whose son was killed while on a mission in Afghanistan three years ago, said she finds special meaning in the memorial, especially in the fact that its permanent home is in Utah.

“My community has rallied around me. They’ve been there during the worst possible moments of my life, and they haven’t left,” Wagstaff said. “… This memorial helps keep alive the memory of my son and all the others that are fallen, and I think that’s important.”

Preschool prep: Making the most of your tot’s first classroom experience Next post