The continuing story of the real-life ‘The Saratov Approach’ elders 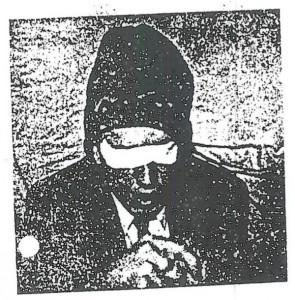 The kidnappers sent this picture of Travis Tuttle tied up with a ransom note to the U.S. Embassy in Russia. (Photo courtesy of Andrew Propst)

It’s a moment in their lives they will never forget.

Fifteen years ago Andrew Propst and Travis Tuttle were kidnapped, held for ransom for five days and let go while serving missions for The Church of Jesus Christ of Latter-day Saints in Russia. Or, at least that is the story in a nutshell.

However, Propst and Tuttle’s story goes far beyond a miraculous ransom survival story, which is why Garrett Batty contacted them to make a movie, “The Saratov Approach,” out of their shared experience. Their story extends beyond the end of the film because they lived.

Upon returning safely from five days of believing they were going to die, Propst and Tuttle were given the choice to continue serving missions or returning home to their families. They both chose to finish their two-year missions. After each made his decision, the companions were immediately separated and taken to Germany.

“We didn’t understand why they were so eager to split us up,” Propst said.

After spending some time serving in Germany, Propst and Tuttle were reassigned to finish their last six months as missionaries in England. Propst was sent to Bristol, and Tuttle was sent to South London.

As they arrived in their newly assigned areas, nobody knew what these two elders had gone through, causing these missionaries to realize that their trials didn’t end when they were freed by their kidnappers.

“Everyone assumed I was a trouble missionary that was getting sent somewhere else,” Tuttle said.

It wasn’t until a Church newsletter came out that other missionaries realized they didn’t have a disobedient missionary in their midst.

Feeling alone in his mission in South London, Tuttle just wanted to return to Russia.

“I was pretty bitter, we still had six months left and I had worked so hard,” Tuttle said.

Tuttle and Propst had spent the previous 18 months memorizing and giving discussions in Russian, understanding the culture and serving the people — not an easy task. Now, they were tasked to relearn the discussions in English, adapt to a different culture and work under new leadership.

“I struggled at first because the discipline of the missionaries in Russia and England were night and day,” Propst said. “I didn’t understand the stuff they were doing. In Russia, it is game face all the time, and it wasn’t like that in England. There were a lot of distractions.”

Both elders admitted they just wanted to return to Russia where they were initially called to finish out their mission. While they didn’t get to return for full-time missionary service, they did return twice for interrogations and the trial. 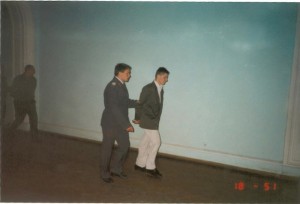 The kidnappers are escorted by Russian police officers into court for the trial. (Photo courtesy of Andrew Propst)

During the time they were held captive, Propst and Tuttle had gotten to know their captors a little and had found out the kidnappers were both in tough spots financially. The younger one was 19 and he had just found out his girlfriend was pregnant.

“I felt sorry for them,” Propst said. “We developed such a relationship with him (the younger captor) that we didn’t like seeing them in that spot (in court).”

The kidnappers had lost weight already from their time in jail.

The older kidnapper received four years in prison while younger one was only sentenced to two years of probation in Russia.

Since Propst and Tuttle weren’t ever able to talk to their kidnappers in person again, they still have a lot of questions about why the kidnappers chose to take them.

“I would want to go back a little bit and I would want to know his whole side of the story,” Tuttle said. “What was going on in his head when they did it. We aren’t mad at him for what happened. 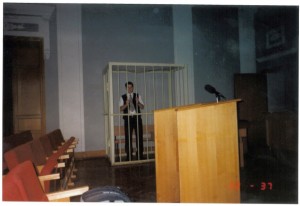 Andrew Propst stands in the cage that the kidnappers were held in during the trial. (Photo courtesy of Andrew Propst)

Despite the mental and physical abuse both Propst and Tuttle received at the hands of their captors, they hold no grudges against them. In fact, they had forgiven their kidnappers while they were still handcuffed to a bed and thought they were going to kill them.

“What made it easy for us is we forgave them before we were free,” Propst said.

In fact, this experience is what Propst described as “the most amazing thing that has ever happened” to him because of the lessons learned and the spiritual experiences that accompanied this trial. Tuttle agreed as he discussed the moment they came to terms with dying.

“You’ve heard people describe it (saying they would be OK with dying) … It’s easy to say that,” Tuttle said. “It’s a lot different to say that when there is a guy in the next room that is really upset. When you’ve got a guy and he takes the clips out and he has you count how many bullets are in there and he takes it back and cocks it. When you truly come to that point and you realize I could really die in the next five minutes and you are OK with it. I don’t want to say it is cool, but it is a really surreal feeling.”

Now, years later, they wonder if their kidnappers know about the film and how it has impacted their lives.

“I’ve never held a grudge; I’ve never had a nightmare,” Propst said. “I do get the heebie-jeebies every once in a while with what if we hadn’t gone with the Spirit.”

Which “going with the Spirit” is exactly what the young elders did when they made the conscious decision not to escape.

Nor do Propst and Tuttle hold any animosity toward Russians in general. They instead are filled with love for them and hope one day to return to Russia.

“I had a number of special relations with the older generation,” Propst said. “Those people that grew up their whole lives under the Iron Curtain. They aren’t just this fictitious enemy. It is cool how we can debunk rumors over a cup of chai (tea).”

Now 15 years after the experience, these former elders try to use their experience to help share a positive message and encourage people to serve missions by speaking in LDS Church firesides.

They are also preparing their own children to someday serve missions. Propst is married and has a 2-year-old daughter and six-year-old son, while Tuttle is married with three sons and a daughter.

“In my situation, it will definitely be their choice, it will not be forced on them,” Tuttle said. “For me personally, there is no better opportunity that presents itself when you are that age to go out there and experience the world, the different cultures, people. There will not be another opportunity in your life where the only job you have is to serve others.”

Despite the pain they endured, they both would allow their kids to serve LDS missions.

“How could we not? It is so selfish of a parent to deny the best blessing their child could ever have,” Propst said. “How do you deprive your kids from taking that opportunity? What a fabulous opportunity the Church gives us by making those missions available.”

In the end of it all, Propst and Tuttle are just grateful they survived and for the lessons they’ve learned through the experience.

“We are incredibly humbled. We don’t feel the slight bit worthy of the attention we are getting,” Propst said. “It’s overwhelming. We are just a couple of regular Joes that happened to be at the wrong place at the right time.

“It’s a humbling experience to realize you were a very dull tool in the hands of the Lord. It is very cool to see the ripple effect of the things that have happened. We are so taken aback by the comments that we have gotten on Facebook as reactions to the film.”

Throughout their experience and these 15 years since, Propst and Tuttle have turned their real-life nightmare into a positive experience to uplift others, teaching us to forgive and trust in the Lord.

10 ways to break from boredom during fall break Next post