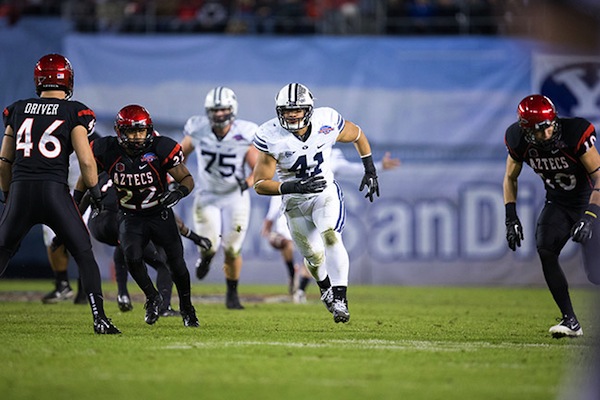 BYU linebacker Uani ‘Unga (41) runs down the field in a football game at LaVell Edwards Stadium. ‘Unga currently leads the Cougars with 45 tackles this season. (Photo by BYU Photo)

No matter what speculation or depth charts come out of spring ball and fall camp, a football season never goes exactly as predicted by coaches and players or by fans and journalists.

Cornerbacks are injured and out before the season even starts, linebackers are suspended and running backs suffer stingers and concussions. And sometimes the leading rushers, receivers and tacklers aren’t the ones expected.

BYU (3–2) is now five games into the season as the team looks to its homecoming game against Georgia Tech (3–2) on Saturday, Oct. 12, at 5 p.m. at LaVell Edwards Stadium (ESPNU).

There are five players breaking out this season and making a name for themselves — even though they’ll be wearing Tradition, Spirit and Honor instead of their names on Saturday.

Uani ‘Unga leads BYU’s defense with 45 tackles this season, including 2 1/2 tackles for loss. During the Utah State game, he both forced and recovered fumbles, in addition to racking up 16 tackles to help the Cougars win 31–14.

‘Unga, a 6-foot-1 linebacker from Rancho Cucamonga, Calif., has been leading the defense all season. Despite a first-quarter chest injury at Virginia, Unga recorded 10 tackles — the team high that game. He’s been beat up a bit this season, but he hasn’t missed a game and continues to stay focused.

After transferring from Oregon State, ‘Unga redshirted and then played all 13 games his junior year, recording 28 tackles (three for loss and one sack). ‘Unga went into fall camp this year as a definite starter and has continued to make solid contributions at Mike linebacker, earning him a spot on the Butkus Award watch list. His consistency and size make the former walk-on a tough and physical opponent this season.

Remington Peck has 18 total tackles, two for loss, and two sacks so far this season. One of his sacks was in the first quarter of the Utah game when he sacked quarterback Travis Wilson.

Peck worked quietly his freshman year in 2012, taking the field in nine games and recording seven tackles as well as one sack during the season opener against Washington State. The sophomore defensive end from South Jordan has been adjusting to the go fast, go hard offense and is showing that his reps are deserved.

In the five games so far, Peck played solid at end. Especially dominating is the unyielding combination of Peck with Ethyn Manumaleuna and Bronson Kaufusi to provide great pressure.

Mitch Matthews is the current leading receiver with 13 catches and 234 receiving yards. The two-game absence of stat-competition Cody Hoffman (13 catches, 212 receiving yards) could affect the standings. However, Matthews has earned his stripes after consistent effort and practice through spring and fall camp.

But what has really catapulted the 6-foot-6 wide receiver this season was his productive play against Utah State. He led the Cougars to a win with three touchdowns, plus two other catches totaling 112 yards.

If the sophomore from Beaverton, Ore., keeps putting in practice time, he’ll continue to get work done on game days. Matthews’ work ethic will propel him through this season and definitely on to the next two years of his eligibility.

Robertson Daniel has the team-high 21 solo tackles (27 total), as well as a broken-up pass. He recorded a career-high 10 tackles against the Aggies last weekend. Daniel is a cornerback favorite because he provides strong coverage and a good eye for defense.

The 6-foot-1 defensive back transferred from a junior college in California, and he was slated to play boundary corner. However, Daniel has done his duty well replacing field corner Jordan Johnson, out for the season with a torn ACL.

Coach Bronco Mendenhall has said he’s impressed with Daniel’s tackling — a natural task for someone who used to play safety. Keep an eye on this one.

Alani Fua is No. 5 on this list and on the field, where he is a one of the team’s dangerous front-seven playmakers.

The 6-foot-5 junior outside linebacker from Northridge, Calif., opened the season with a career-high eight tackles against Virginia. He was named FBS Independent Defensive Player of the Week after recording seven tackles, two sacks and five solo stops, during BYU’s home-opener win against No. 15 Texas.

Defensive coaches noticed Fua’s consistent effort and competence during spring practices, and his confidence is continuing to carry him through this season. Don’t expect him to miss a tackle any time soon.

10 ways to break from boredom during fall break Previous post

From ‘Johnny Lingo’ to ‘The Singles Ward’: 8 memorable Mormon movies Next post