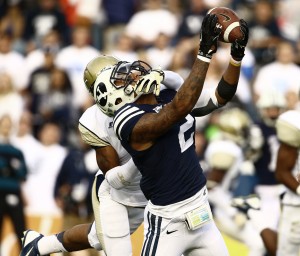 Senior receiver Cody Hoffman makes an acrobatic catch for a touchdown during the first quarter against Georgia Tech.

The BYU offense looked as synchronized as ever, while the defense put on the finishing touches en route to a 38-20 thumping of Georgia Tech on Saturday.

The Cougar offense played the entire game without a turnover for the first time this season, as Taysom Hill went 19-27 for 244 yards and a 45-yard touchdown strike to Cody Hoffman in the first quarter. Hill added 65 yards and a touchdown on the ground, while Jamaal Williams contributed 86 yards and his first score of the season. BYU head coach Bronco Mendenhall said the team is starting to hit its potential.

“I think we played well,” Mendenhall said. “I gauge it a lot by points. With the exception of the last touchdown, 38-13 looked pretty good. I thought we had a really nice plan and a good team. Eventually, we could be pretty dynamic. I think you saw that especially in the first half.”

Like the win against Utah State last week, the Cougars started fast, when Hill connected with Hoffman on the third play of the the second drive to 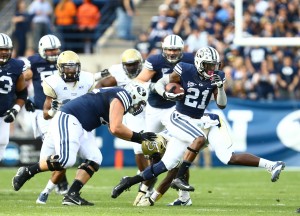 Running back Jamaal Williams had 86 yards rushing on 17 carries and one touchdown.

score the opening points of the game. The touchdown was Hoffman’s first of the year and tied him for second all-time at BYU.

The teams went back and forth through the next few drives, as the Yellow Jackets’ quarterback Vad Lee capped off a 75-yard drive with a touchdown run to tie the game, but the Cougars responded quickly, going 61 yards in under two minutes, before Williams found the end zone for the first time this year, taking the lead for good.

The teams traded a couple of field goals until Hill led the Cougars down the field, gaining yards on the ground and through the air, until he put the bow on the drive with his feet for his seventh rushing touchdown of the year to take the 24-10 lead. 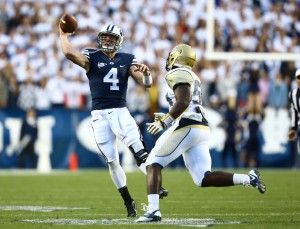 Taysom Hill had another solid start for the Cougars completing 19 of 27 passes for 244 yards and a touchdown.

The Yellow Jackets added a field goal to cut it to 24-13 at the half, but neither team could move the ball in the third quarter, as both defenses came out strong. The defensive struggle tipped toward BYU when linebacker Alani Fua snatched a Lee pass out of the air and returned it 51 yards to put the final nail in the coffin. Georgia Tech head coach Paul Johnson said his team played better in the second half, but still couldn’t move the ball like they needed.

“I thought it was kind of a tale of two halves,” Johnson said. “The first half, we couldn’t get out of our own way. In the second half, we got squared away defensively, and we made some plays, but we couldn’t finish a drive or do anything offensively.”

Algernon Brown picked up his first touchdown of the year to take a 38-13 lead late in the fourth quarter. Georgia Tech added a touchdown in garbage time, but the game was firmly in the Cougars’ hands. Even with the convincing win, Hill said they can still improve.

“We tried to do a little too much (in the second half) and we didn’t keep to our keys,” Hill said. “We need to get better at that.”

Even though the Yellow Jackets gained 400 yards of offense against a tough BYU defense, the Cougars forced two critical turnovers and held their opponents to under 21 points for the 12th consecutive game.

Linebacker Spencer Hadley, who had originally been suspended for five games, saw action in just the fourth game since his suspension, and made some crucial contributions, recording a sack and recovered a fumble in the win.

“It felt amazing to be able to be out there with the guys and just to be able to contribute in any way possible,” Hadley said. “It’s just good to be back.”