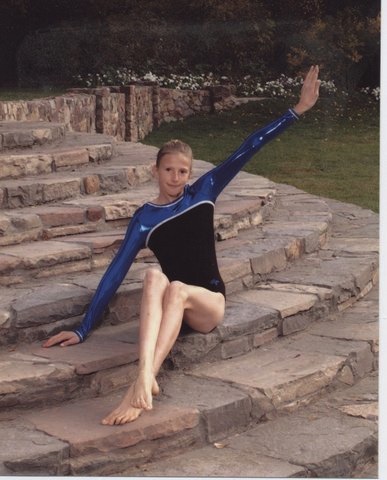 Jennifer Hamson wasn’t always shooting the basketball or spiking the volleyball. Hamson started out as a gymnast. (Photo courtesy of Hamson family)

Long before she was shooting hoops and working on her jump serve, Jen Hamson was throwing dismounts.

At 6-foot-3, Hamson towered over the other eighth-grader gymnasts.

“There were definitely some problems, like one time we were at a meet and they had to move the beam because I would’ve hit the ceiling if I had done my dismount right,” Hamson said. “It was so fun though.”

Now eight years and four more inches later, Hamson dominates on both the basketball and volleyball court. The BYU senior has been a dual-sport athlete since her freshman year of high school.

After much prodding from friends and her mother, a former BYU basketball player, Hamson decided to quit gymnastics and give basketball a go.

“My mom said maybe I should try something that I was going to naturally be better at,” Hamson said. “I decided to try it out and ended up loving it.”

Hamson is redshirting this volleyball season, but will play her last year of basketball, including pre-season games she usually has to miss. After graduating in April 2014, Hamson will do post-graduate work and play out her last season of volleyball eligibility.

Her family is very supportive and still comes to volleyball games even though she is redshirting this season. Hamson grew up in Lindon as the oldest of five. The entire family is tall and together they are a sight to see — or stare at because, Hamson guesses, people don’t think it’s inappropriate to stare at tallness.

“We went to New York one time as a family, and we were walking down the street,” she said. “My parents would walk behind us and watch everyone looking at us. But as a tall person, you just kind of ignore it. I honestly just block it out and focus on what I’m doing because after a while it gets to be too much.”

Hamson was the tallest for a long time, but now her siblings are catching up and even surpassing her height — one of her brothers is 7-foot-3.

“Whenever I’m around my own family, I feel normal and even short sometimes,” she said. 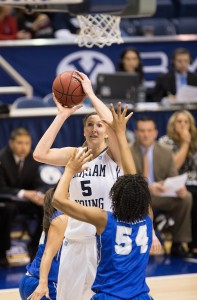 While height provides an obvious advantage in sports and daily life — ability to reach up high and never getting lost in a crowd — it also has its fair share of disadvantages. Hamson said she just wore capris year round through junior high because it was impossible to find pants long enough. Clothing is still a problem, but she’s found online shopping and custom jeans to be helpful.

Besides clothing difficulties, Hamson said she can’t go sneak into class late, has to crane her neck to see stoplights, and annoys flight attendants when she falls asleep with her knee sticking out into the aisle.

She gets more than enough awkward hugs and is often set up with people just because they are tall. (By the way, she’s usually only interested in someone tall, preferably taller than she is.)

“Sometimes I’ll be standing in a circle, and I’ll be honest — sometimes you can’t quite hear what everyone’s saying, so you don’t know what’s going on,” Hamson laughed. “You wouldn’t think it’d be that big of a difference but sometimes it is! You just nod your head and smile.”

Speaking of hearing, Hamson is considering a future in audiology or communication disorders, or maybe physical therapy or medical school. But first on her list is to keep playing ball after college, probably overseas. She’s doesn’t know yet if that ball will be flying over a net or soaring into one, but she is excited to see where she ends up.

For now she’s focusing on school, improving her game and enjoying the rest of her BYU career.

“I’m so glad I’m here,” Hamson said. “I was really nervous about my decision to come here. … I can do both sports, the coaches have worked together so well, the athletic administration really cares, and the classes here are great, and there are wards and activities. It’s just been a great place for me. I’ve loved it.”

While she said she’s kind of nervous about her future, Hamson is concentrating on her more immediate goals like dunking the ball in a game this basketball season.

“I’m working on dunking it, but we’ll see how that goes,” Hamson said. “I always have so many people on me. … I can’t find that free space, so I’m trying to work on my breakaway. It’s senior year, so I just have to do it. I just have to figure out how to make it happen.”

Because I said so: When the answer to 'Are you pregnant?' is 'No' Previous post