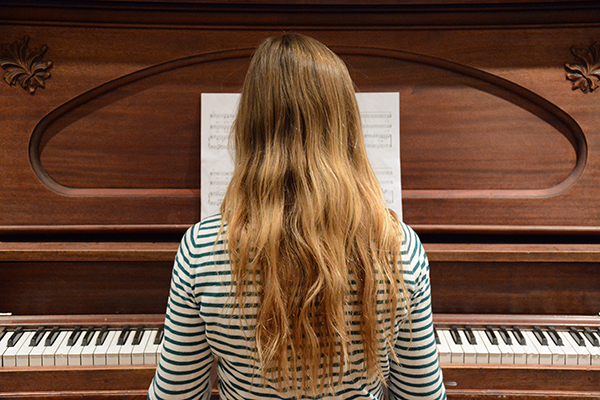 Getting kids to practice, whether it be an instrument or a sport, can seem like a outright war. By having kids take responsibility for their own practice, parents slightly remove themselves from the equation. (Photo by Matt Bennett)

Your daughter pleaded to take piano lessons but getting her to sit down and actually practice is not exactly a harmonious experience. And your son was really excited to join the soccer team, but his lackluster effort during practices makes you wonder if the money you plunked down was worth it. Sound familiar?

Enlisting children in extracurricular activities is no small endeavor. There are registration fees, materials fees, uniform fees and tournament or competition fees. There are carpools to coordinate, schedules to juggle and younger siblings to entertain. Parents invest a lot of time, money and effort in helping children develop their talents and passions — according to the USDA, it takes an estimated $241, 080 to raise a child from birth to age 18. So it can be frustrating when kids or teens refuse to practice or participate and make good on their end of the deal.

But practice time doesn’t have to be a chore. Whether your kids are learning to play an instrument or improving their athletic skills, these five strategies from Managing Director of Art City Music Academy Chris Blonquist can help kids make the most out of their practice time.

Practicing is a very grown-up activity, says Blonquist. It requires discipline and delayed gratification — two skills that are not typically innate in children but can be taught. “Ninety-five percent of kids will resist practicing,” Blonquist said. If your child senses that you are on the fence about them practicing, they will push and test your limits. So, before your child starts any activity or lesson, Blonquist recommends parents make sure they are 100 percent committed to practicing and attending. That commitment will trickle down to your children. “My kids don’t like to practice more than anyone else, “said Blonquist, a father to four children ages 10 to 19. “But they realized we are not going to give in and so they haven’t complained about practicing for years.”

2. Stick to the routine

“Routine is always extremely important,” Blonquist said. “We all know the power of habits.” Blonquist recommends music students practice at the same time every day to sidestep on-going negotiations, like “Can I please play outside first and then practice?” His 10-year-old daughter, for instance, prefers to practice piano before she leaves for school in the morning. “Having a set time when kids are practicing just avoids so many battles,” he said. “Everyone knows when it’s going to get done and parents are just helping the kids keep their own commitments instead of imposing their will on them.” When it comes to athletic practices, make sure your kids know it is mandatory for them to attend — and be on time.

Once you’ve established that practice is non-negotiable, be as flexible as you can about the details. This principle may seem like it’s in direct conflict with rule No.2, but it’s really not. “We try to let our kids have as much say as they can so they feel like they are part of the decisions and have some control,” Blonquist said. “Say, ‘This is what we are doing but we can talk about how we do it.’” Work with your kid or teen to set a consistent time for practices or make a commitment to attend every sports practice. And if something comes up one day and practice gets moved or missed altogether, don’t sweat it too much.

This principle is as true for sports as it is for music and other lessons: Encourage your child to have an objective for their practice time rather than watching the clock. “That goal can be a moving target, it can be whatever you decide to accomplish at that moment,” Blonquist said. “But you must have an objective or goal or you’re just wasting time.” Try to move away from the “practice for 30 minutes” mentality and towards practicing until a certain goal is met, which could be playing a song through without errors, reciting a speech for debate without referencing notes or shooting a certain number of baskets. “It’s really important to remember that almost everyone is inspired by the idea of excellence, especially their own.”

Practicing consistently is hard work — there really isn’t a way to sugarcoat it. “There is this idea going around that we need to make everything fun for kids, but the truth of the matter is in life not everything is fun. If we want to have fun then let’s go to Disneyland,” Blonquist said. “Yes, there are things we can do to make practicing more fun, and I’m all for it, but if that’s all we care about, then we risk missing out on things that are much more important.” Instead of worrying about making practice time fun, parents should focus on making it rewarding by pointing out accomplishments. “I think it’s really important to celebrate our victories,” he said. “These kids are doing very hard things and improvements can be incremental and go unnoticed by our children.” So be your kids’ champion by pointing out the improvements with phrases like, “Wow, that was hard and you did it,” and “You’ve worked really hard and are doing great.” “When we do that, we are teaching them very valuable lessons for life,” Blonquist said.

The battle of the Cougars - BYU and Houston Next post