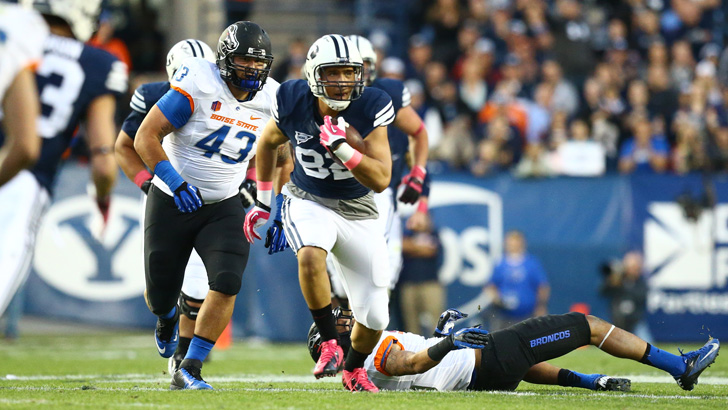 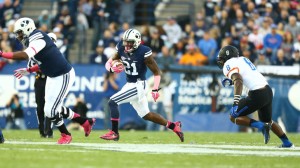 The BYU Cougars continued its longest win streak since the 2009 season by pounding the Boise State Broncos 37-20 in Provo on Friday night and becoming bowl eligible for the ninth straight season.

Taysom Hill threw for 339 yards and three touchdowns, while rushing for another score, as the Cougars jumped in front early in the first half, while the defense forced four Bronco turnovers, cruising to the 17-point win.

The win is the program’s first ever win over Boise State and improves the Cougars’ win streak to five games. Tight end Kaneakua Friel, who caught three passes for 53 yards in the win, said something clicked in players’ minds after the team’s last loss to in-state rival Utah on Sept. 21.

“After that (loss) it really set in,” Friel said. “We knew we had a great team, especially on the offensive side, that we could improve. As a whole, we’ve been doing a great job, but we have so much more ways to go.”

Hill started the scoring in the first quarter by keeping the ball on a read option and sprinting untouched for 20 yards and the touchdown. The rushing touchdown is Hill’s eighth score on the ground this season, which equals the total rushing touchdowns by the rest of the team combined. Hill said it was crucial for them to start as quick as they did. 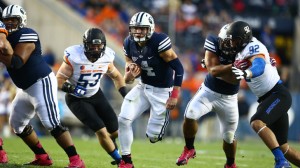 “We got going early in the football game which set us up for the second half to come out and get the win the way we did,” Hill said.

After the teams traded field goals, Hill hooked up with Ross Apo on a 37-yard strike. The defense then forced the first of four Bronco turnovers, giving the Cougars plenty of time to strike  again. BYU went six plays in 1:41 and Hill found Cody Hoffman in the corner of the end zone for the 24-3 halftime lead. With the touchdown catch, Hoffman set the all-time BYU record for most touchdown receptions, with 31, overtaking Austin Collie.

“(Collie’s) a great receiver, so I feel that means a lot for me,” Hoffman said. “I’m just going to keep going and set the record even higher if I can.”

The Broncos added a field goal to begin the second half, but the Cougars responded with another passing touchdown from Hill, as he found a streaking Mitch Mathews for a 40-yard score. BYU head coach Bronco Mendenhall said Hill is one of the most exciting players he has had in his tenure at BYU.

“(Hill’s) one of the best players that I’ve ever coached,” Mendenhall said. “I mean, he’s really good. The game slowed down for him.” 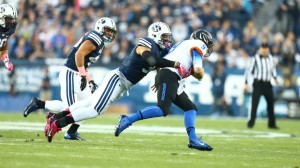 Kyle Van Noy continued to live up to his All-American status by continually making appearances in the Broncos backfield and recovering a fumble. (Photo by BYU Photo)

Despite the hot passing game which has developed in the past few weeks, the Cougars didn’t shy away from the run game, as Jamaal Williams hit the century mark again, rushing for 107 yards on 21 carries. Hill added 69 yards on 18 rushes, but it was Boise State’s Jay Ajayi who racked up the most yards, totaling 151 yards on the day.

Boise State quarterback Grant Hedrick added a rushing touchdown to close the gap, but the Broncos shot themselves in the foot the rest of the way, turning the ball over on three of their next four possessions. Boise State head coach Chris Petersen said the turnovers were the killer.

“BYU’s a good team, on offense and on defense, but with four turnovers, we’ve got no chance,” Petersen said. “There’s not a good time for a turnover, but those were backbreakers.”

Meanwhile, the Cougars played turnover-free for the second of the last three games and added two more field goals to put any thoughts of a comeback out of the question and earning the trip to the Kraft Fight Hunger Bowl in San Francisco on Dec. 27.

The Cougars are off next week, giving them a lot of time to prepare for the big game at Wisconsin on Nov. 9.

Mind our own business: Local entrepreneurs get candid about county culture Next post