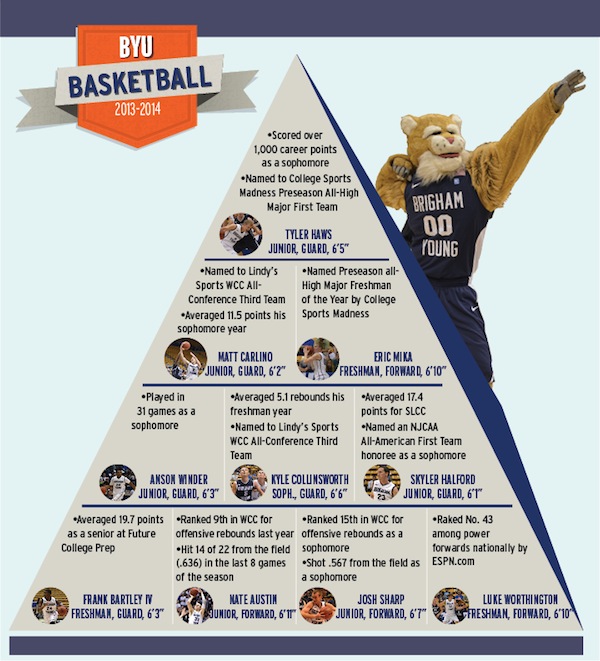 Basketball is back. Only five players are returning from last year’s squad, so the team’s got some bonding to do. BYU looked a little rusty during Cougar Tipoff, but that’s to be expected from a team made up of no seniors and a bunch of freshman and transfers. Everyone’s got something to contribute as BYU works to get back to the Big Dance after last year’s NIT berth.

Here’s a preseason pyramid of players according to their importance to the team’s success:

Tyler Haws: Duh. This junior is poised to have a monster season as he leads the BYU Cougars. He’s the reigning scoring champion in the West Coast Conference and is bound to continue racking up the accolades. Haws should be even more polished this year after an entire offseason of tireless practice and thousands of reps.

Matt Carlino, Eric Mika: You could make an argument for both of these projected starters to take the top spot from Haws. Cougar fans know all too well that Carlino’s individual game sways the team’s performance.  The mercurial junior needs to stop being turnover-happy and find consistency to reach his contribution potential.

As for Mika, Brandon Davies’ departure left enormous shoes for him to fill. The true freshman needs to prove the hype about him and keep the Cougars from being a guard-dominated squad. The rebounds have to come from somewhere, and the 6-foot-10 Mika figures to be a big part of the answer.

Kyle Collinsworth, Anson Winder and Skyler Halford: BYU is built around the top three players on this list, but this trio needs to make key contributions to take the Cougs to the next level.  Collinsworth (aka Big Russia) returns from his LDS mission to high expectations and is a vital defense, hustle and rebounding guy.

Winder was the team’s best man-to-man defender in a zone-heavy system last season.  The combo guard struggled on offense, but has since found some confidence.  With a renewed emphasis on man-to-man defense this year, Winder could be a major contributor.

BYU was ice cold beyond the arc too often last season, but wiry junior college transfer Halford is here to change that.  Halford drew deserved attention at Boom Shakalaka and again at the scrimmage with his sweet stroke from deep. If the Cougars need a scoring boost off the bench — which they will — Halford should be the go-to guy.

Frank Bartley IV, Nate Austin, Josh Sharp and Luke Worthington: These guys are the somewhat known commodities. Bartley IV showed that he can make moves on the court and could prove to be an explosive backup point guard. Austin’s 6-foot-11 size is much needed, as well as his ability to step out and sink a shot from time to time. Sharp is a projected starter, who can offer grit and sometimes a game-changing dunk. Worthington brings smarts and size to the court, which could be invaluable should one of the other bigs go down.

Andrew Johnston, Graham Pingree and Chase Fischer: Johnston and Pingree will fill up the roster and support the team this year. Fischer will sit this season because of NCAA transfer rules.

An up Hill climb: BYU's QB has earned an about-face from critics Next post