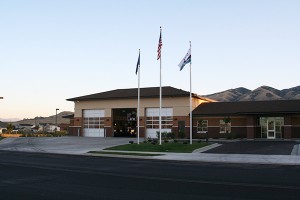 The sun sets rises near Station 82 of the Lehi Fire Department. The department was awarded the Life Safety Achievement Award for 2012. (Photo courtesy Lehi City)

The Lehi Fire Department firefighters are trained to fight wild land fires and urban fires, to teach children and adults how to prevent fires and to lead an urban search and rescue — and they are getting noticed for it.

One reason the department received this award was because of its consistent efforts to train its firefighters. The trainings teach  firefighters about fighting wildfires and structural fires, urban search and rescue and advanced cardiac and pediatric life support, among other educational training.

“We’re always training, because our goal is to have a high impact and low frequency type of job,” said Rick Howard, Lehi Fire Department battalion chief. “We go out in a moment’s notice, and we may or may not know what will happen, but we’re prepared … to adapt and overcome.”

The Lehi Fire Department’s efforts to educate the public about fire prevention and safety also paved the way to receiving the award. Their education efforts involve regularly checking in with local school districts to update fire education posters in the schools and to make sure they are practicing fire drills. They also educate adults on fire prevention by reaching out through local events, such as community health fairs and weekday church groups.

And the results show that their efforts paid off and drew NASFM’s attention. In 2012, there were zero fire deaths in Lehi structures and no devastating structural fires, and Howard said he’s proud of that.

“These (firefighters) are very dedicated to their jobs, and … I’d put my guys up against anybody in the nation,” Howard said. “I’m happy about (the award), it’s another feather in our cap, and we can always do better.”

Food for thought: Why we don't eat out with our kids Previous post