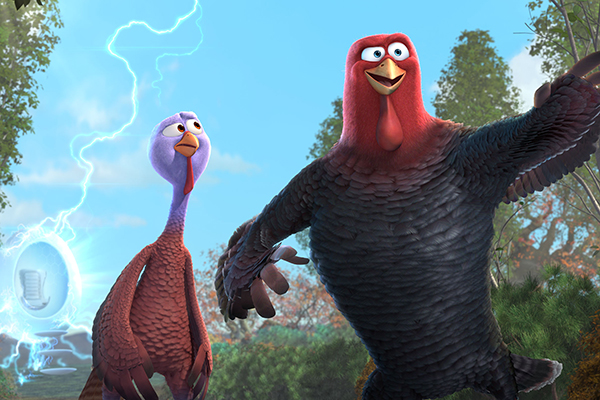 Two turkeys (Owen Wilson and Woody Harrelson) travel back in time in an attempt to get turkey off the holiday menu.

It may not be what the pilgrims had in mind, but a trip to the movie theater on Thanksgiving Day is as much as a tradition for many families as eating pumpkin pie for dessert.  The holiday season that officially begins on Thanksgiving Day and ends on New Year’s Day is a huge moneymaker for moviemakers who hope to end the year with a blockbuster hit. A trip to the movies can be a great way for families to relax together and make memories — but only when the movie is something you actually want to remember. Here is a look at eight soon-to-be-released movies that may be a fit for your family:

Best for tweens, teens and parents

Best for: Parents and teens

Based on the best-selling novel by Orson Scott Card, this futuristic film follows protagonist Ender Wiggin, a brilliant youngster who is recruited and trained by the International Military to the battle against a hostile alien race. The film stars Asa Butterfield, Hailee Steinfeld, Ben Kingsley, Viola Davis, Abigail Breslin and Harrison Ford.

Great for the entire family

From the director Jimmy Hayward of “Horton Hears a Who!” comes this animated comedy about two turkeys who ruffle one another’s feathers but must put aside their differences to travel back in time and try to change the course of history. Their goal: To get turkey off the Thanksgiving menu for good. Voice talent by Owen Wilson, Woody Harrelson and Amy Poehler.

Best for teens and parents

When Odin and Asgard are faced with an enemy they cannot withstand, Thor is forced to team up with his sinister brother Loki on a perilous journey that reunites him with Jane Foster and forces him to sacrifice everything to save the world. Starring Chris Hemsworth, Natalie Portman and Tom Hiddleston.

Great for the entire family

When their kingdom is trapped in eternal winter, the brave Anna, mountain-man Kristoff and his reindeer sidekick Sven team up on an epic journey to find Elsa the Snow Queen and put an end to her icy spell. This Walt Disney Animation Studios musical comedy features the voices of Kristen Bell, Idina Menzel, Jonathan Groff, Josh Gad, Santino Fontana and Alan Tudyk.

Best for older teens and parents

The Hobbit: The Desolation of Smaug

Rating: Not yet rated
The second in a trilogy of films adapting the eponymous J.R.R. Tolkien masterpiece, “The Hobbit: The Desolation of Smaug” continues the quest of Bilbo Baggins as he journeys with the Wizard Gandalf and thirteen dwarves to reclaim Lonely Mountain and the lost Kingdom of Erebor. Directed by Academy Award-winning filmmaker Peter Jackson, the film stars Martin Freeman, Ian McKellen and Richard Armitage.

Best for teens, parents and grandparents

Rating: PG-13
Walt Disney promised his daughters he’d make a movie of their favorite book, P.L. Travers’ “Mary Poppins” — but he didn’t think it would take him 20 years to make good on his word. “Saving Mr. Banks” tells the untold backstory of Walk Disney’s efforts to convince the ill-tempered writer to let him adapt her beloved story for film. Starring Emma Thompson and Tom Hanks.

Best for the dinosaur fanatic in your household

Rating: Not yet rated

Ever wondered what it was like when dinosaurs ruled the Earth? This story brings the hit BBC “Walking with Dinosaurs” documentary series and “The Arena Spectacular” to the silver screen with a thrilling prehistoric adventure about an underdog dino who triumphs to become a hero for the ages.

Best for teens with Bieber Fever

Rating: Not yet rated
Baby, baby, baby … this one is for the Beliebers! Justin Bieber’s Christmastime documentary follows the 19-year-old popstar’s rise to superstardom. The film is a follow up to his 2011 film debut, “Never Say Never,” and features new interviews with Bieber and appearances from manager Scooter Braun, Usher Raymond, Rodney Jerkins, Ludacris more.