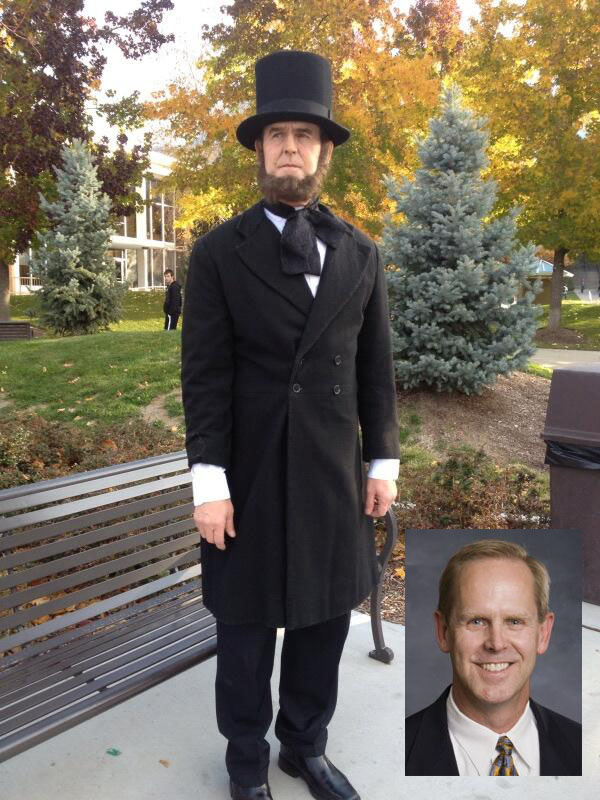 Tom Holmoe is a man with a strong sense of history.

For Halloween last week, BYU’s athletic director dressed up as Abraham Lincoln, the 16th President of the United States.

Holmoe is also the man behind the Cougars’ Declaration of Independence.

In a press conference in September 2010, Holmoe announced that BYU’s football program would be going independent in football starting in 2011.

It was a bold move, to be sure.

But Holmoe is also a man with a strong sense of how to shape the future. He had a clear idea about what he wanted the Cougars’ football schedule to look like as an independent.

“Our vision is to play football games across the country against many of the storied football programs in their legendary stadiums and to have those same highly-regarded programs return to Provo to play in LaVell Edwards Stadium,” Holmoe said that day.

At the same time, Holmoe asked fans and media to be patient when it came to scheduling, explaining there would be “a transition period of a couple of years before we achieve the full vision of what football independence can become.”

Two years later, Holmoe is delivering on that vision.

Exhibit A: This week’s game against No. 21 Wisconsin at Camp Randall Stadium. Exhibit B: BYU travels to nationally ranked Notre Dame on Nov. 23.

Back in 2010, many people said it couldn’t be done. They didn’t believe BYU could schedule quality opponents in the month of November. But Holmoe believed it could happen, and he went to work. With help from ESPN, he began the long, tedious process of scheduling high-profile, future opponents.

It brings to mind an Abraham Lincoln quote: “Give me six hours to chop down a tree and I will spend the first four sharpening the axe.”

That’s exactly what Holmoe has been doing the past few years — sharpening his axe. And the tree is falling.

Now, BYU, which has a 6-2 record and has won five consecutive games, is playing in two venerable, historic venues this month with an opportunity to make some national noise. The Wisconsin game will be televised on ESPN, and the Notre Dame contest will be broadcast on NBC.

“It’s really what we were hoping when we became independent,” said coach Bronco Mendenhall. “It’s fun to have had Texas, Georgia Tech, Boise State and Utah in our stadium. Now, late in the year as an independent, that we get Wisconsin and Notre Dame, that’s closer what I envisioned at the beginning. It just takes time to get there.”

Wisconsin is scheduled to play in Provo in 2019.

“We’re always looking for opportunities to schedule storied football programs like Wisconsin,” Holmoe said. “It will be a great experience for our coaches, players and fans to visit Big Ten country and have Wisconsin play at LaVell Edwards Stadium.”

The good news for BYU is, Holmoe has set up many more high-profile games in the coming years.

Part of BYU’s approach to scheduling as an independent involves playing games in an array of geographical locations — the East Coast, the Midwest,  the South, and the West Coast.

Of course, this isn’t a new philosophy.

Former BYU athletic director Glen Tuckett believed the Cougars could increase exposure for The Church of Jesus Christ of Latter-day Saints by playing in various areas of the nation, providing church members with chances to see BYU in action.

“We always wanted to get the team where the Saints could see us,” Tuckett said.

Mendenhall and Holmoe share a similar belief, and they’ve worked to bring prominent names to Edwards Stadium as well.

“The schedules are growing in difficulty and intrigue,” said Mendenhall. “As difficult as it was to begin, we’re ending up with more opportunities of depth and difficulty than I ever imagined. Really, it’s becoming the art of saying no, and balancing the opponents, and the venues and the travel at a higher level than what I thought we would have the opportunity to do. In a nutshell, (independent scheduling) is more difficult than I expected, but now more opportunities than I dreamed of.”

In 2016, BYU plays Arizona in Phoenix; and West Virginia at FedEx Field in Landover, Md. They also travel to Cincinnati and Utah.

Holmoe has said recently that he has big plans for BYU’s bowl destinations over the next six years, with details coming soon.

For BYU fans who want to see the Cougars play on big stages, these are halcyon days. But these are days that only happened because of vision and hard work.

Holmoe knows all about that.

“The best thing about the future,” Abraham Lincoln said, “is that it comes one day at a time.”

Getting social: Tips for monitoring your teen's social media use Next post