Getting social: Tips for monitoring your teen’s social media use 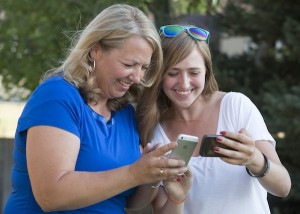 Parents embracing technology and social media can help improve their relationship with their kids according to Sarah Coyne, BYU associate professor of family life. (Photo by Mark Philbrick/BYU Photo)

“I know a lot of parents are nervous about this new media landscape, and I am one of those parents,” said Sarah Coyne, associate professor of family life at Brigham Young University and mother to four children. “But this is their reality.”

According to the latest survey by the Pew Internet & American Life Project, part of the Pew Research Center in Washington, D.C., 95 percent of American teens use the Internet, and some 80 percent of those teens use an online social networking site such as Facebook or MySpace. An estimated 73 percent of teens have a cell phone and almost half of those teens own a smartphone.

Like it or not, parents need to embrace technology to stay involved with what their kids are doing, Coyne says. Much of Coyne’s research focuses on media use and family relationships. She co-authored a study published in the July issue of “Cyberpsychology, Behavior, and Social Networking” that found that teenagers who are connected to their parents on social media feel closer to their parents in real life.

“Parents and kids who use Facebook together see some really positive effects,” Coyne said. “There is less aggression and less depression among these teens and they feel more connected to their parents.” Also, these teens had higher rates of pro-social behaviors and were more generous, kind and helpful.

“There are definitely some benefits to kids using social media,” Coyne said. “It’s good for shy kids so they can test out the waters and be social without the face-to-face interaction. It’s also good for kids who aren’t shy to increase their circle of friends and feel connected to relatives and friends who are far away.”

1. Wait until 13  — According to the fine print on Facebook, users must be at least 13 years old. “A minimum of age 13 makes sense to me but you should know your child,” Coyne said. “Some at 13 may be totally ready for the responsibility of having a social media account and others aren’t mature enough to handle it.” If your teen is responsible, dependable and knows how to self-regulate, he or she may be ready for a social media account.

2. Be their friend — “I think that it should be a given that you’re friends with your child on Facebook, especially when they first start out,” Coyne said. Being a friend will help you monitor what they’re doing online and give you a unique window into their social world. And, as Coyne’s research suggests, it may also develop a stronger relationship with your teen.

3. Time it right — Place limits on how much time your teen can spend online. Some teens (and adults, too) can develop an Internet addiction that displaces schoolwork and face-to-face interaction. “It’s scary when social networking sites become your reality,” Coyne said. Before teens get started with social media, set rules and have a good discussion about boundaries and privacy, she suggests.