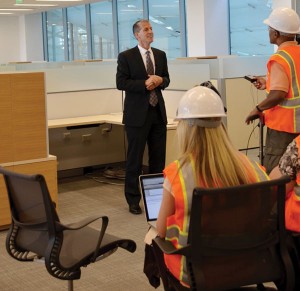 Downtown Provo has been name-dropping lately: Google Fiber, Allegiant Air, Provo City Center Temple. And as of October, Nu Skin became the biggest name on the streets as the network marketing company dropped $100 million on its Innovation Center — a building that connects Nu Skin’s tower to its new data and employee space designed by the same architects who gave the Apple stores their clean, minimalist look.

CFO Ritch Wood took editor Jeanette Bennett on a hard-hat tour of the 168,000-square-foot building, which had its grand opening recently as global distributors descend on Provo Center Street in October.

Q: How does this new building fit into historic downtown Provo?

A: We’ve built this to match what we created initially at Nu Skin and with what the city is trying to accomplish with its historic downtown area. Our goal was to marry the surrounding buildings and influences.

Q: What is one of the main goals of the building?

A: We’re creating recognition space for our sales force around the globe. You’ll see the names of key leaders as we record their dreams and accomplishments in a visible way.

Q: Is the public welcome?

A: Yes, we have an 18,000-square-foot atrium just off Center Street. It connects both of our buildings and serves as a breezeway from Center Street to 100 South. We’ll also have two eating establishments open to the public. Both are on the main floor and bring life to our atrium. This is a beautiful building for the whole city to enjoy.

Q: What excites you most?

A: First, we’re bringing our employees together under one roof instead of the scattered buildings we’ve had in downtown Provo. We will be working side by side and rubbing shoulders. Second, we’ll double the size of our data center to 9,500 square feet. This is critical in supporting the growth Nu Skin has experienced around the world. We built this building with cash, and as we come into this building, we’ll be above 90 percent capacity. We need the capacity this building provides.

Q: What other buildings are planned for the Nu Skin campus?

A: The distributor building is another “statement building” that speaks to our distributor force. It will be completed in Spring 2014. The pavilion and back gardens will be beautiful.

Q: What role did CEO Truman Hunt play in this building?

A: Truman is a visionary, and there is no “mediocre” in his vision or his vocabulary. In a 2008 meeting, Truman brought a book he’d been studying about innovators. He walked us through companies whose roots started in the Great Depression. He told us we had to innovate our way through the recession. We spent time as an executive committee figuring out new ways to grow. We implemented ideas and brought out strong product offerings at the same time. We launched our anti-aging product in 2009 right as the country was heading into a deep depression. Our company culture brought a whole new energy and opportunity to the business.

Q: What do you hope Nu Skin’s legacy is within the Utah Valley community?

A: We hope everybody who touches our business knows we are a different company. We want to do everything we should be doing as a meaningful player in the Provo community.

Q: What influence has founder Blake Roney had on this building?

A: His fingerprints are all over everything we do. He’s a creative entrepreneur, and that DNA has been passed along to our management team. He’s very busy in France as an LDS mission president, but he continues to know what is going on with Nu Skin, and he has a deep love for our sales force around the world.

Q: Can you shed insight into Nu Skin’s relationship with the LDS Church as you share this piece of ground?

A: How could we ask for a better partner? Like us, the LDS Church wants its surroundings to look as beautiful as they can. We have coordinated with them on a number of different topics, including landscaping and parking facilities. Our properties touch right here behind this building. They are the ideal neighbor.

A: We’ve doubled our business in the past three years. Last year we grew from $1.7 billion to $2.2 billion in revenue. This year we’ll go from $2.2 billion to $2.5 billion. We’re extremely committed to keeping a strong and clean balance sheet. I can’t wait to see what we’ll be doing five years from now.