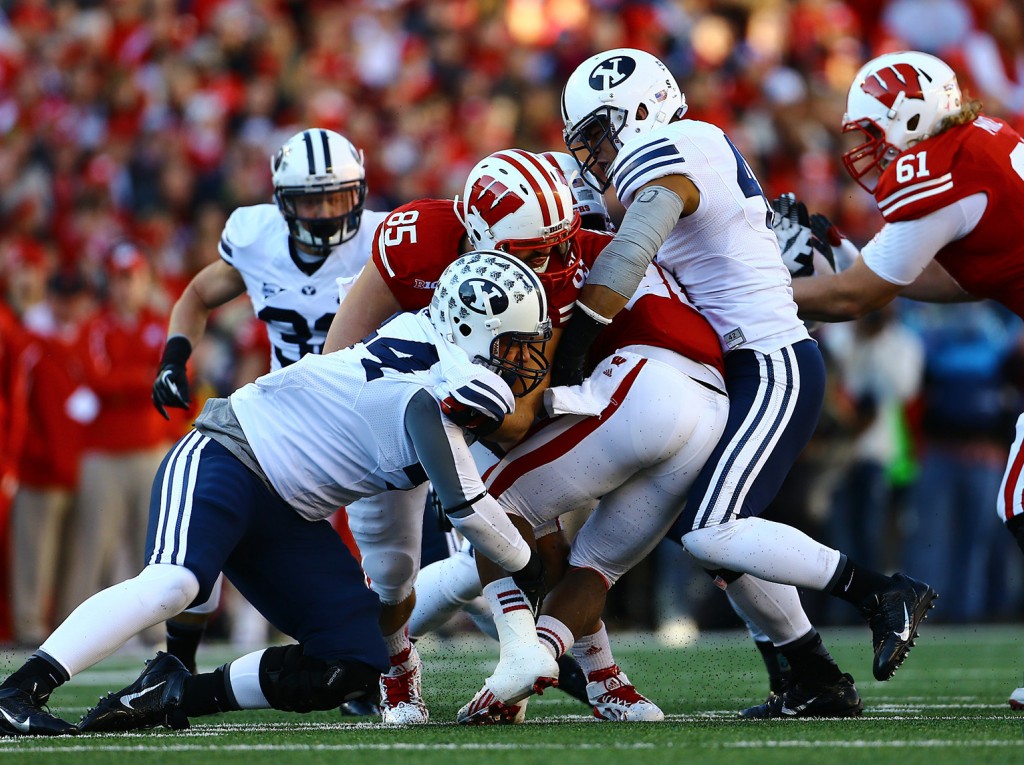 The three-headed Wisconsin monster of James White, Melvin Gordon and the stingy Wisconsin defense proved too much for BYU to handle, as the Cougars fell Saturday in Madison 27–17.

White, a running back, inflicted the majority of the damage, rushing for 147 yards and gaining another 47 through the air en route to scoring all three Badger touchdowns. Gordon added another 86 yards on the ground, as Wisconsin racked up 425 total yards, frustrating the Cougar defense behind the massive offensive line and physical running backs. Senior safety Daniel Sorensen said the physical play didn’t surprise the Cougars.

“It was a physical game. It came down to missed assignments and missed execution,” Sorensen said. “We had an idea of what they were going to do, and that’s what they did, and we couldn’t execute like we wanted to.”

The Badgers started quickly, moving 76 yards on 11 plays on the opening possession, culminating with White’s four-yard touchdown run. The opening possession proved costly for BYU as well, as senior linebacker Spencer Hadley was lost for the game with a left knee injury.

The Cougars couldn’t get their offense moving in the first quarter, following up an opening three-and-out with an interception from Taysom Hill on an overthrown pass. The Cougar defense forced two turnovers of its own — a fumble recovered by Craig Bills and an interception which fell into the lap of Kyle Van Noy after being tipped around. Sorensen said the defense needed to force more turnovers than those two in order to win the game.

“That’s what it came down to — we needed more of those turnovers later in the game to get our offense better field position,” Sorensen said. “(Wisconsin) settled in and we couldn’t get off the field fast enough to get our offense the ball.”

BYU got its first points of the game on a 31-yard field goal by Justin Sorensen, but the inability to punch the ball into the end zone came back to haunt the Cougars, as BYU struggled against the sixth-ranked defense in the country, totaling 370 yards of offense — more than 100 yards less than its season average.

Wisconsin added another 10 points before halftime on a Jack Russell field goal and a touchdown catch from White, increasing its lead to 17–3 at the break, while controlling the tempo of the game, keeping the normally explosive BYU offense on the sidelines. Safety Craig Bills said the attitude was still positive at the break.

“Going into the locker room at halftime, we definitely weren’t thinking we were going to lose the game, our mentality was we were going to win,” Bills said. “Unfortunately, we didn’t execute as well as we should have.”

After Wisconsin added another field goal in the second half, Hill found Cody Hoffman for a 34-yard touchdown strike with a defender draped all over him for the first BYU touchdown of the game, cutting the lead to 20–10. With the catch, Hoffman took sole possession of first place in BYU history in receiving yards, as he now holds the record for receptions, touchdowns and yards in the school’s history.

White capped off his afternoon hat trick with a 14-yard touchdown run early in the fourth quarter to make it a three-score game. BYU’s attempted comeback included another touchdown hookup between Hill and Hoffman, but it was too little too late.

Hill finished the day 19–41 for 207 yards, with the two touchdowns to Hoffman and the first-quarter interception. But Hill totaled just 53 yards rushing, bottled up by the Wisconsin defense. Hoffman had another 100-yard receiving day, totaling 113 yards on seven catches.

The Cougars, now 6–3 on the year, return to play their final game at LaVell Edwards Stadium next week, taking on FCS Idaho State on Saturday. 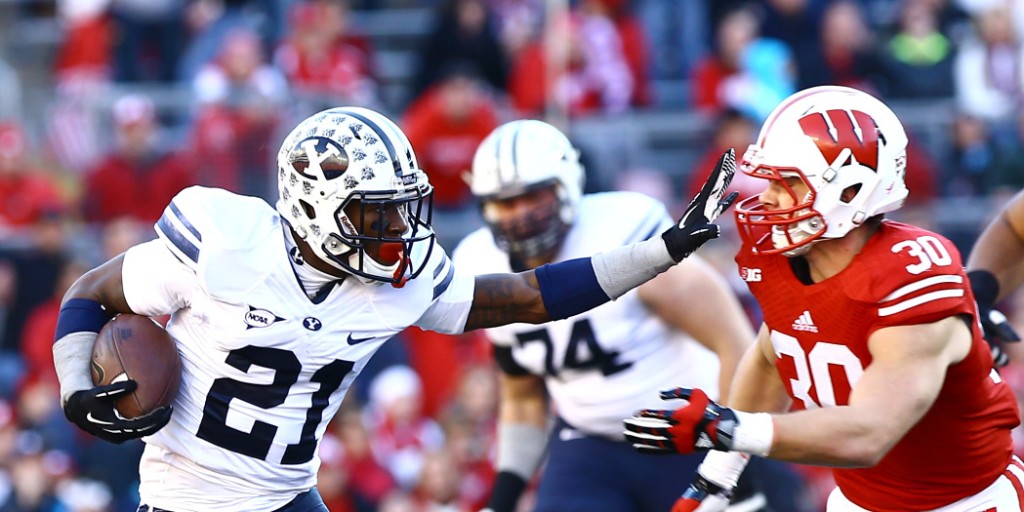 Sophomore running back Jamaal Williams rushed the ball 14 times for 76 yards Saturday against the Badgers. (Photo by BYU Photo.)