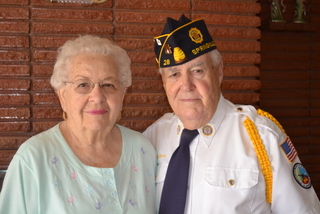 Keith Davis of Springville fought on the front lines of WWII 70 years ago. Now, Davis and his wife, Marva, actively serve in multiple veterans organizations in the community. (Photo by Kim Christenson)

In a war that left 15 million soldiers dead and 25 million wounded, it’s nothing short of a miracle that an 18-year-old boy from Springville survived after fighting on the front lines for nine months. Keith Davis’s only battle scars are punctured ear drums and the memories of the horrifying scenes he witnessed — most notably as he stepped into a Nazi concentration camp, which the German soldiers fled from just moments before he and his fellow soldiers arrived.

At 88 years old, Davis still has the endearing smile and kind, confident eyes he had as a young soldier. He has traded his dark locks for grey ones and his practiced, swift march for a slower one, but he is in remarkably good health and good spirits. Davis’s memory of his war experiences is equally impressive — he has shared his story with many schools, church groups, veterans organizations, media members and government officials. When Davis talks about his war experiences with twinkling eyes and an occasional humorous side story, his pride and patriotism are obvious. 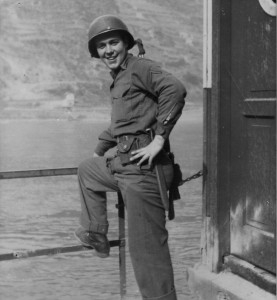 At 18 years old, Keith Davis of Springville was one of the youngest soldiers in his battalion. As he loaded the train which would take him and the other drafted men to basic training, some one pointed to him and said, “They better take that little boy off the train before it starts.” (Photo courtesy of Keith Davis)

Two days after he graduated from high school, Davis left his parents and his 8-year-old brother in Springville and went to Fort Douglas to join the 16 million American military members serving in World War II.

After his basic training, Davis and his fellow soldiers in the 16th Field Artillery Observation Battalion in General Patton’s Third Army sailed in a troop ship from New York City to Liverpool, England, and then on to the Normandy coast of France. Davis arrived on Utah Beach a few days after the D-Day invasion on June 6, 1944.

“We looked to our left and we could see Omaha Beach. It was under heavy fire,” Davis said. “Shells would burst over the ships and onto the sandy beach and rain shrapnel terror down on the men below. It was a horrible site to see that.”

Davis and his army fought through to the Belgium-German border, where they were confronted by Nazi field marshal Gerd von Rundstedt’s troops, dressed in stark white snow camouflage uniforms. Thousands of Germans and Americans were killed in the ensuing battle, which later became known as the Battle of the Bulge.

“The firepower was so tremendous and continuous that many men just went insane,” Davis said.

On Christmas Eve during the Battle of the Bulge, Davis and the two other soldiers in his observation post found an old farmhouse which was remarkably untouched by the nearby explosions. The three soldiers were welcomed into the house by a Belgian man and woman and their two young children. They sang Christmas carols together, and for one night, Davis and his friends stayed warm.

As the war neared its end, Davis and some of his battalion were part of the liberation of the Ohrdruf concentration camp, the first concentration camp liberated by U.S. troops. When Davis arrived at the camp, he was appalled by the conditions there. The barracks offered only shelves or dirt floor for beds and no toilets aside from the occasional hole in the center of the room. The surviving prisoners were severely malnourished, and many died after their liberation due to disease and malnutrition.

On May 8, 1945, Davis and his comrades received word that Germany had surrendered and the war was over. When Davis’s ship home arrived in the Boston Harbor, Davis called his parents to tell them he arrived safely home.

“They were very, very happy to hear my voice,” Davis said. “I was glad I had my experience, but I wouldn’t want to do it again.” 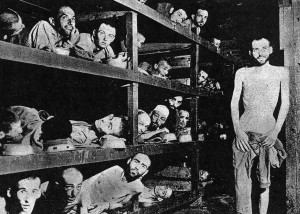 Keith Davis was part of the liberation of a Nazi concentration camp. When he and the other U.S. soldiers arrived, the prisoners were living in horrible conditions and were afraid the uniformed soldiers were there to give them more trouble. (Photo courtesy of Keith Davis)

It’s been 70 years since Davis’s service in World War II, but he has continued to actively serve his country ever since. Davis is a member of numerous veterans organizations including the Veterans of the Battle of the Bulge, the Disabled American Veterans, the Veterans of Foreign Wars and the American Legion. Davis’s wife of 66 years, Marva, has been a member of the auxiliary units for each of those organizations.

Davis and has also served as secretary for the Springville Veterans Memorial Board and the Sons of Utah Pioneers. He drew the plans for the veterans pavilion in Hobble Creek Canyon and for the memorial at the Evergreen Cemetery in Springville. At the groundbreaking for the new Central Utah Veterans Home which opened last spring, Governor Gary Herbert presented the Utah Distinguished Service to Veterans award to Davis, which is the highest award presented by the Utah Department of Veterans Affairs.

Davis also honors his fellow veterans (there are almost 18,000 just in Utah County according to the Utah Department of Veterans Affairs) by participating in honor guards at veteran funerals. So far, Davis has participated in more than 1,000. According to the National WWII Museum, about 600 WWII veterans die every day, and it is estimated that by 2036, there will be no more surviving WWII veterans.

But as long as he’s alive, Keith Davis will always remember what he fought for.

“When I think of my experiences, it makes me appreciate what we’ve got,” Davis said. “Freedom is not free.”

Keith Davis was one of the WWII soldiers featured in “Saints at War: Experiences of Latter-day Saints in World War II” (Covenant, 2001). The directors of the Saints at War project are composing an exhibit which will commemorate the 100th anniversary of WWI this summer. If you know of a story about someone who served in WWI, you can submit your story at saintsatwar.com.

BYU falls to physical Badgers in Madison 27–17 Next post