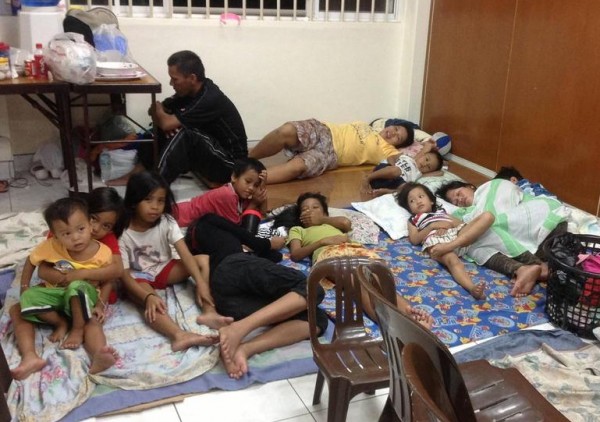 Evacuees at the Carajay LDS Meetinghouse in Lapulapu City (Mactan) took shelter as early as Nov. 7 as they braced for the strongest typhoon to hit the Philippines this year. (Photo courtesy Mormon Newsroom)

Jenny Pettibone’s son, Dax, left his home in Saratoga Springs and arrived in the Philippines Cebu Mission in early October — one week before a 7.1-magnitude earthquake hit the area. Just a few weeks later, Super Storm Haiyan (Yolanda to the Filipinos) followed in the earthquake’s wake.

“We first heard about the storm from our son on his last P-day,” Pettibone said. “He told us that they had been warned that a typhoon was coming. He was super excited to experience his first typhoon.”

Sister Kaycee Bogenschutz, a missionary serving in the Philippines Tacloban Mission from South Jordan, didn’t immediately realize the gravity of the situation either.

“We went to … Tacloban this week, and President informed us that a super storm was coming,” Bogenschutz wrote in an email to her family. “We have been told that super storms were coming before and then it wasn’t bad, so our mindset was that, although President always makes sure we are safe and we take the necessary precautions, we were actually going to stay in Tacloban.”

But something didn’t feel right, and Bogenschutz and her companion returned to their apartment in Catarman. The next day, the typhoon passed through Tacloban and virtually destroyed the city. 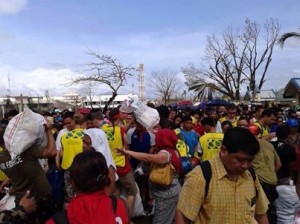 Typhoon Haiyan hit the Philippines Nov. 7, hitting Samar first, then moved on to Visayas, Eastern Mindanao, Mindoro and Palawan. In anticipation of the storm, missionaries were moved to safe areas and prepared with food and 72-hour kits.

LDS Church leaders also opened meetinghouses for shelter before the storm hit. The latest reports indicate that 14,000 people have taken shelter at 200  meetinghouses.

After the storm, mission leaders went to work accounting for missionaries. Pettibone learned her son was safe, though she has yet to receive a message from him. As officials were searching for missionaries, Karen Bogenschutz read on LDS.org that missionaries in 20 of the 21 Philippines missions were accounted for. Her daughter’s mission was the one that remained.

“I can’t even tell you what I felt when I read that,” Karen Bogenschutz said. “I put my phone by my bed, just in case someone called. At just before 6 a.m., I got a call. I didn’t recognize the number, but I answered anyway. It was Kaycee. She hadn’t been able to get a hold of the mission president or anyone else. She said ‘I can’t talk long, but I just had to tell you that I’m alive.’ I only got to talk to her for maybe 30 seconds. I don’t know how she got through, because we were told later that there was no cell phone service.”

The comfort Karen Bogenschutz felt in the moment quickly gave way to worry for her daughter’s safety moving forward — she didn’t know if Kaycee had any food, water or supplies. As it turns out, she did. But Kaycee Bogenschutz and her companion were alone in the destruction for two days until she made contact with mission leaders.

“The night the storm hit us, a fire broke out in Catarman, and I just had that ‘end of the world’ feeling,” Kaycee Bogenschutz wrote. “Thinking back, that storm literally passed over my head. I had no idea that that was what was coming for us. We just thought it would be another heavy rain and maybe some flooding. That happens a lot here.”

But it wasn’t just another heavy rain. The storm left a path of destruction, with homes and businesses completely leveled. Bodies line the streets, and relief efforts are hampered by debris, lack of communication and power outages. Google created a person finder and relief map to help people locate loved ones. Officials estimate that 10,000 people could be dead.

“Those streets you see on TV — I know them,” Kaycee Bogenschutz wrote. “I’ve walked there. I’ve shopped there. Just Friday I ate at the Robinson store there. And the thing I can’t get off my mind is all the homeless kids that roam the streets in Tacloban. What could they have done?”

This devastation is what worried Pettibone most. 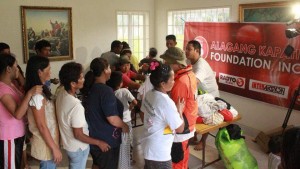 Alagang Kapatid Foundation, a partner with LDS Charities in many humanitarian projects, visited and helped serve the evacuees at the meetinghouse in Matnog, Sorsogon. (Photo courtesy Mormon Newsroom)

“The whole time, I’ve never worried that my son was dead somewhere,” Pettibone said. “I just always felt sure he was safe. But I just hope he’s OK — that he’s not scared and not hurt. You worry about the things that he’s going to see. Is he going to be able to emotionally handle them? You assume they’re safe, but you worry about those things more.”

But in the midst of the tragedy, good news remains. Church leaders have made contact with almost every missionary serving in the Philippines, with the exception of 24 who were serving in a location where communications are especially difficult. Most families — like the Pettibones and the Bogenschutzes — have received word that their missionaries are alive and well. And in areas where relief is possible, missionaries are already hard at work assisting in humanitarian efforts.

Heroines in history: 4 scriptural role models for women Next post