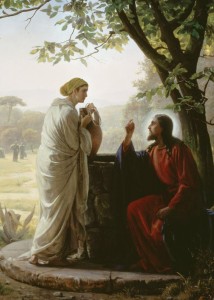 The woman at the well is one of many exemplary women mentioned in the scriptures.

If you flip through the pages of your scriptures, you’ll have no trouble picking out dozens of male role models. After all, there are about 2,900 men mentioned in the LDS standard works. But what about the women?

“It’s men who are doing the writing, and they’re writing from their perspective,” said Camille Fronk Olson, department chair of ancient scripture at BYU. “So it shouldn’t be surprising that we’re seeing their experiences or the people they relate to — meaning other men. So when you do find women in the scriptures, this is saying it’s a major story or incident that couldn’t be told without including that woman.”

Olson says that because of ancient customs, it’s remarkable that a woman could make her way into the verses of the scriptures at all. Most people are surprised to learn there are more than 150 women named in the Bible alone.

And while these women don’t get quite as much attention as Moses, Nephi and Daniel, there is plenty we can learn from them. Here are four of our favorite scriptural heroines.

As told in 2 Kings 22 and 2 Chronicles 34, after the temple had been desecrated by former rulers, Josiah, the king of Judah, decided to repair and restore it. During this restoration, a seemingly important document was found. After a number of men — the high priest, the scribe and the king himself — had attempted to read and interpret the document, the king decided they must find out if the book was truly sacred scripture from God. So they turned to a prophetess.

“So they go find Huldah — they find a woman,” said Olson. “She could read, which is phenomenal. The men go to her house, she reads it, and declares afterward, ‘Thus saith the Lord.’ They take her word for it. She had the knowledge. She had prepared herself, and when there was a need, she was ready. She didn’t say, ‘Let me go check.’ Who knows what she’d been doing with the rest of her life; whatever her preparation, she had a good reputation, and they knew she would be the one to trust. And that was the moment captured for generations afterward.”

2. The woman at the well

Though she is never named, the woman at the well (John 4) plays an important role in the New Testament — she is the catalyst in bringing her Samaritan community to Christ.

“The woman at the well was the first person to whom Christ identified himself as the Messiah,” Olson said. “No matter how hard and challenging and disappointing her life had been, it did not change her options for the future. She gives hope and promise that we can change, and not only change but be more open to understanding deep, deep truths, even without any education. She’s in the midst of doing her everyday work of getting water, and that’s when the opportunity came. She took it and didn’t say, ‘I’m not appropriate for this.’”

Also known as Priscilla, Prisca was (likely) a Roman aristocrat who married Aquila, a Jew. When riots between Christians and Jews began, she and her husband ended up as tentmakers in a Greek City. When Paul came to open the area for preaching, he stayed with them and they became major missionaries with him.

“In more cases than not, her name is listed first in the Bible — before her husband’s,” Olson said. “I love that wherever they go, she opens up her house, and that’s where the Christians meet. They relocate to Ephesus and teach Apollos, who becomes one of the great Christian leaders. Priscilla taught and expounded the scriptures. She had the financial backing and the education, and she gave it all up for a lifetime of missionary work and spreading the gospel of Christ. She is one of very few upper class individuals, and she was willing to sacrifice whatever it took.”

Deborah, an Old Testament prophetess, was named a judge over all Israel because of her faith. When Israel was captured by Canaanites, the Israelites were afraid to go against them — unless Deborah came along.

“Deborah said, ‘God didn’t bring us here to be in bondage,’” Olson said. “So the military captain said, ‘OK, we’ll go to battle even though the Canaanites have chariots and horses, and we have nothing. We’ll do it, but only if you come with us.’ She goes to inspire them and remind them what God has called them to do. God fights the battle for them, and for 40 years they have peace in the land. Here she is using her position to say we can be better in inspiring men to do what they need to do.”

Reaching 300, one win at a time for BYU's Rockwood Next post