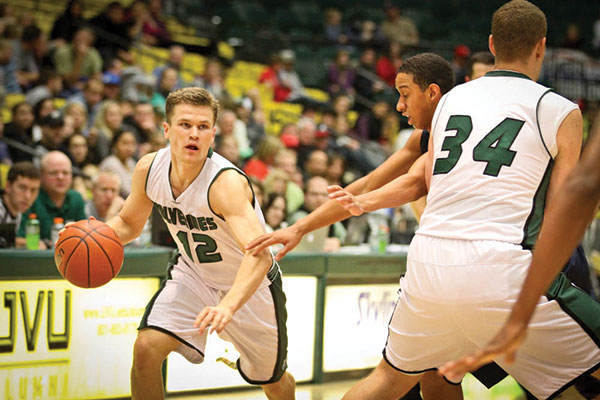 Senior point guard Holton Hunsaker will lead the Wolverines in their quest to compete for a WAC championship. (Photo by Shane Truskolaski/UVU Athletics)

The road to joining a conference with an NCAA Tournament berth has in some ways been a long time coming for UVU. The Wolverines spent years in Division I limbo — competitive and building, but without a guaranteed shot at the Big Dance.

On the other hand, it’s only been 10 years since UVU was competing as a junior college against the likes of Salt Lake Community College and Snow College.

Regardless of the long or shortness of the journey, coach Dick Hunsaker is excited to see his team finally get a chance to earn a NCAA Tournament berth by joining the Western Athletic Conference.

This is an exciting year to jump onto the Wolverine bandwagon. UVU returns a pair of award-winning seniors who will make the jump to the WAC easier to manage. 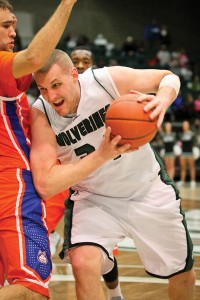 At point guard, the Wolverines see the return of senior Holton Hunsaker. He is a pre-season Second Team All-WAC selection by the coaches after averaging 13.2 points per game and shooting 90.4 percent from the free throw line last season. He is also a great floor leader and keeps things running smoothly.

“Everything starts with the point guard,” Coach Hunsaker says. “The team is run by the point guard. If you don’t have solid play at that position, there’s a let down. Holton’s strengths are in directing and leading the team.”

The Wolverines will be facing stronger conference competition than in previous seasons but are still picked to finish fourth by both coaches and media. New Mexico State is the unanimous choice for league favorite, but UVU should be competitive.

Adding depth and athleticism was key for UVU’s success, and Coach Hunsaker is confident the team has done that.

“In the past, our bench has been too thin,” he says. “We’ve expanded that. We’re a bit more athletic, but we need to be the best conditioned, best prepared and most fundamentally sound team on the floor if we’re going to be successful.”

In addition to the better conference competition, UVU plays non-conference games against Oklahoma State and Oregon.

“We plan to battle and compete,” Coach Hunsaker says. “We know it will take our best effort to stay with them, but we’re excited for the chance.”

“I like how this group works,” Coach Hunsaker says. “They get along. If we get everyone into the team concept, I’m looking forward to what we can do.”