BYU brings eight paintings to the US for the first time 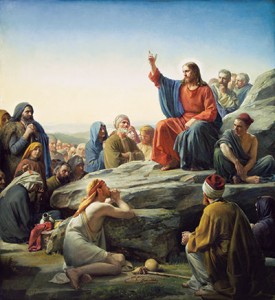 This painting, “Sermon on the Mount” by Carl Bloch, is one of four paintings that will be on display until February, after which four different Bloch paintings will take their place for the remainder of the exhibit. This is the first time these paintings have left their home in the Frederiksborg Castle in Denmark. (Photo courtesy BYU Museum of Art)

PROVO — For the first time in history, eight paintings by religious artist Carl Bloch have been moved from the Frederiksborg Castle in Denmark and will be temporarily displayed in the Brigham Young University Museum of Art. Several other paintings by Bloch from Sweden will also be on display. The exhibit, “Sacred Gifts,” will additionally feature Heinrich Hofmann’s and Frans Schwartz’s religious art, which traveled from Germany, Denmark and New York.

“We have extraordinarily given this permission in recognition of the great importance these images have for the people of Utah,” said Mette Skougaard, director of the Frederiksborg Castle, in a letter to the BYU Museum of Art. “(We) will for this occasion share the unique works with people in another continent who have a special appreciation for the religious works of Bloch.”

The exhibit’s opening is the culmination of a decade-long process that started with the BYU museum’s purchase of Bloch’s “Christ Healing the Sick at Bethesda.” That addition prompted BYU museum administrators to look into featuring a greater collection of religious art, a desire that was in part fulfilled when the they featured more than 20 paintings and sketches by Carl Bloch in 2010 and 2011 in an exhibit called “Carl Bloch: The Master’s Hand.” The exhibit broke museum records, as it saw hundreds of thousands of visitors come through its doors during its display.

After the exhibit, they continued to work with museum and church administrators in Europe and New York, and that work led to the “Sacred Gifts” exhibit that brings together 20 pieces of religious art that have never before been displayed in the same exhibit — and the art from Frederiksborg will never leave its home again.

Henning Fode, Chairman of the Board at The Museum of National History at Frederiksborg Castle, said, “It is very extraordinary to have dealt with this request because these paintings … are not hanging on the wall, they are an integrated part of the panels of the (castle). We had to dig them out of the walls, and this is  the first time that has happened. These paintings have never left the Frederiksborg Castle, and my director has instructed me to say that it will never happen again.” 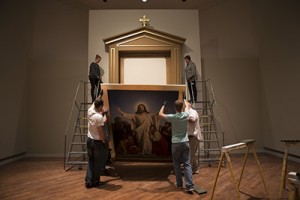 Museum employees work to complete the installation of “Christus Consolator” by Carl Bloch, which is on loan from Sweden. (Photo courtesy BYU Museum of Art)

As chairman of the St. James’s Church in Copenhagen, Ole Pagels loaned Bloch’s painting titled “The Resurrection.” He said he appreciates the exhibit because it brings together religious art from different painters.

“‘The Resurrection’ (by itself) is very beautiful, but … it’s great to see it together with all the other religious paintings,” Pagels said.

The museum offers a brief video introduction to the exhibit, and also provides headphones and mini iPads that contain additional information about the paintings.

Dawn Pheysey, BYU Museum of Art head curator, said she expects the exhibit to be especially meaningful to members of The Church of Jesus Christ of Latter-day Saints, who are already familiar with some of the paintings.

“I am … grateful to have these incredible paintings of the Savior that we are, as a community, generally familiar with,” Pheysey said. “There’s nothing like seeing … the actual painting in person.”

The “Sacred Gifts” exhibit opens on Friday, Nov. 15 and will close in May 2014. Four of the eight paintings loaned from the Frederiksborg Castle will be on display at one time. The first four will be displayed until February, and the second four from February until the close of the exhibit in May. Patrons are encouraged to reserve free tickets in advance in order to control the crowds.