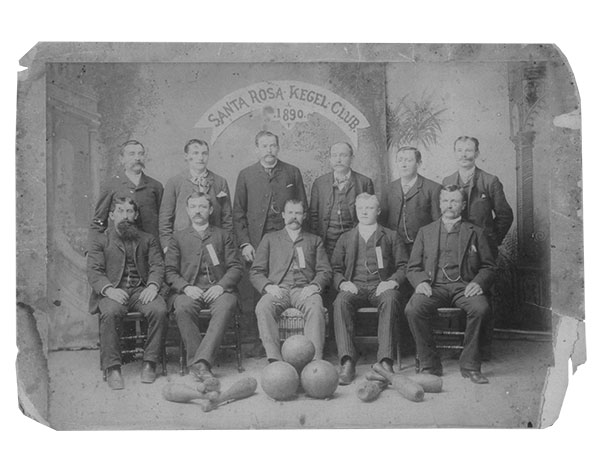 Ancestry.com researchers located this photo of Matt Meese’s second-great-grandfather, Henry Meese (seated second from left), with his bowling team. Matt felt an immediate connection because he is also no stranger to the alley — Matt has been known to bowl in the 200s.

Matt Meese, an actor and writer on Studio C, is constantly dreaming up new characters to become on BYUtv’s sketch comedy show. When Ancestry.com offered to research his family tree’s cast of characters, Matt’s shoulder angel asked, ‘Who do you think you are?’

“I haven’t done a lot of family history work myself but I’ve always been fascinated by it,” Matt says. “So far the only cool thing I can tell you is that I share a birthday with a grandfather. Which really isn’t that cool now that I think about it.”

Genealogy researchers at Ancestry.com went far beyond birth dates to dig up details, stories and photos of Matt’s ancestors. 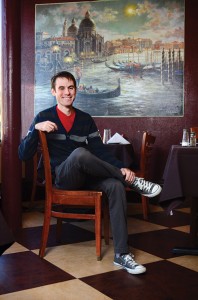 While Matt Meese has yet to master the full breadth of Italian cooking he observed from his grandma, he has a deep appreciation for it. The Provo bachelor and Studio C star pays homage to his roots at Gloria’s Little Italy where he loves anything covered in rosata sauce. Ancestry.com served up some stories from Matt’s past that mirrored his height and his interests. (Photo by Dave Blackhurst)

Matt was born in Morristown, N.J., and grew up in Phoenix. When he came to BYU for college, he attended a Divine Comedy troupe show and couldn’t laugh off the idea of getting involved.

“They looked like they were having so much fun on stage so I decided to try out,” Matt says.

The rest is history. After performing with Divine Comedy for five years, Matt graduated with a degree in psychology — and decided he needed to find a new gig. He liked the idea of turning the skits he had done into a show and pitched the concept to friend and BYUtv producer Jared Shores. Jared and BYU decided to give it a whirl. Three seasons later and hundreds of thousands of YouTube hits later, Studio C is a hit! And Matt is the brains behind some of the program’s best characters including the Shoulder Angel, Captain Literally and Voldemort.

Matt’s future in comedy is unwritten, but his history carries clues. Matt’s maternal side of the family tree can be summed up in one word: Italian. His mother’s parents, Blase and Adele Palladino, are originally from the East Coast but moved to Arizona to watch Matt and his three siblings grow up. They infused their Italian heritage into Matt’s life, including huge Italian feasts every Christmas Eve.

“The house was filled with good food, talking and laughing,” Matt says. “And everything is louder when you are Italian.”

But beyond his grandparents, Matt didn’t know much about his Italian heritage.

As it turns out, Matt’s roots in the performing arts run deep — spanning five generations to be exact. Matt’s maternal third-great-grandfather, Tobia Nicastro, was listed as a “musician” in a 1900 census document found by Ancestry.com.

Tobia arrived in the United States in 1886 and made his home in New York. He and his family lived on Mulberry Street, the heart of Manhattan’s “Little Italy” district. During that time period, a staggering 76 percent of the city’s population was made up of immigrants.

Tobia’s son Louis (Matt’s second great-uncle) was also a performer. He started out as a street musician and worked his way up to playing in an orchestra.

“I have never even heard his name before!” Matt says. “To see the street where he lived and to hear these stories is so cool. Who knew?!”

From Sauerkraut to Sonoma

Matt knew even less about the paternal side of his family. He remembered they came from Germany and settled in the California area. Paternal second-great-grandfather Henry Meese offered some clues.

Born in Bremen, Germany, Henry later brought his family to Santa Rosa, Calif. — the heart of wine country — where he owned and farmed a vineyard.

A California Voter Register of 1896 revealed a physical description of Henry: 5 feet 8 inches tall with brown hair. Sound like anyone else in this story?

“I always thought my height came from my mom’s side of the family since she is very short. But now I know I’ve got it on both sides,” Matt joked.

Another enlightening ancestral epiphany? Henry Meese was a fantastic bowler and was part of a German bowling club in California. Matt is also pretty good at hitting the pins and has been known to score in the 200 range.

While family history might seem like a maze of records, dates and places, Matt discovered that looking into his past revealed parallels to his own life and helped forge a stronger connection to where he came from and where we might be going.

“I’ve never been to Italy or Germany but now I feel like I really need to visit!” Matt says.

Because I said so: Sorry not sorry Next post