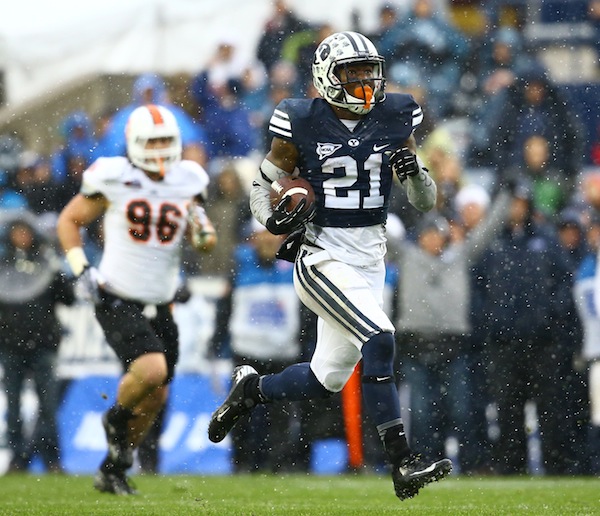 Jamaal Williams ran for 131 yards and three touchdowns in just under one half of play, and backup Adam Hine added 141 more and another score on the ground, as the Cougars thrashed the Idaho State Bengals 59–13 in Provo Saturday afternoon.

Ten different Cougars recorded at least one rushing attempt, totaling 578 total yards, including 406 on the ground as almost every BYU player in uniform got a chance to play in the final home game of the season. Head coach Bronco Mendenhall said developing some depth was an important key to the game.

“I think we played maybe everybody that was dressed today, so that was  a great occasion to reward those kids,” he said. “The game was clearly in hand at halftime, and so it was fun to see everybody play.”

In addition to the two running backs, Taysom Hill and Algernon Brown added 62 and 61 rushing yards respectively. Brown scored from 23 yards out near the end of the first half. The Cougars ran the ball nearly three times more than they threw it in the blowout win.

Hill wasn’t as precise as in previous weeks with his passing, going 11–19 for 153 yards, with two touchdowns, but three interceptions, before giving way to two other quarterbacks who took snaps.

The Cougars started slow, with Williams scoring from seven yards out on the team’s second possession, but a Hill interception set up an Idaho State field goal to make it 7–3.

On the ensuing possession, BYU, facing a 4th-and-1 from its own 30, handed it off to Williams, who got the necessary yard and then added 69 more, blasting off for the longest touchdown run of the season. Williams said the run was also used to prove the Cougars will attempt fourth down conversions.

“It was good to show we’ll go for it on fourth down,” he said. “We’re not afraid to do it, even on our 30-yard line. It was just tremendous blocking and a great opportunity to show the speed I have.”

The conversion shifted momentum full force for the Cougars, as they poured in five more touchdowns in the second quarter alone, including Brown’s score, both of Hill’s touchdown passes to seniors Skyler Ridley and Richard Wilson on senior day and an interception by defensive end Bronson Kaufusi, which he took in for an easy 12-yard score. Kaufusi said the defense gave a solid effort throughout.

The Cougars quickly added to their lead in the second half, when Hine took a handoff and used his kick return speed to blow past the Bengal defense for a 64-yard touchdown run less than a minute into the second half.

Idaho State scored its only touchdown of the game when quarterback Justin Arias hooked up with Luke Austin for a 6-yard score in the third quarter.

BYU backup quarterbacks Ammon Olsen and Christian Stewart traded possessions in the second half, resulting in 10 points on a run-intensive approach.

The Cougars head to South Bend, Ind., next week to take on Notre Dame, attempting to avenge last season’s loss, which several Cougars said they gave away.

“I think we’re going to take the same approach as last year,” senior linebacker Kyle Van Noy said. “I know we’ll come prepared. We feel like we owe them back for last year. We felt like one slipped away last year and we’ll be ready to play.”

Because I said so: Sorry not sorry Previous post