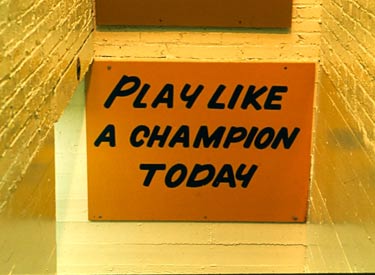 Many college football teams have a tradition of touching or rubbing a special object before taking the field. Few if any objects are as well-known as the Notre Dame ‘Play Like A Champion Today’ sign. (Photo courtesy Notre Dame Athletics)

You always remember your first time.

I remember well my first trip to Notre Dame — back in 1994. I had grown up reading stories about South Bend, Ind., and watching history and tradition flashing on the television screen.

But it’s difficult to understand until you experience it.

It’s a place where fans know the game, and they respect the game. And they are passionate about winning.

The week before BYU played the Fighting Irish in 1994, I was standing in the visitors’ locker room at Fresno State, where the Cougars had beaten the Bulldogs, 32–30.

BYU defensive ends Randy Brock and Travis Hall were dressing next to each other. As the excitement died down, I asked Brock if he had seen nationally ranked Notre Dame get thumped by Boston College, 30–11, that afternoon.

Yes, he had. So did many of the BYU players and coaches, who had watched the game on TV from the comfort of their hotel rooms.

Perhaps he was experiencing flashbacks from the previous two years, when the Irish,with a team filled with players that went on to the NFL, steamrolled the Cougars by scores of 42–16 and 45–20, respectively.

Not far away from Hall and Brock was linebacker Jim Freeland, who had never played against Notre Dame.

“I’ve waited my whole life for Notre Dame,” he said. “I know all about them and their Touchdown Jesus. They’ve got theirs. We’ve got ours.”

On the day before the game, coach LaVell Edwards led a walk-through at historic Notre Dame Stadium. He closed the practice with a kneel-down, run-out-the-clock play. Victory formation.

“I told our offense, ‘This is the best play in football,” Edwards said later. “Let’s use it tomorrow.”

On game day, I remember walking around the campus on a beautiful fall afternoon. Yes, there was a blue-gray October sky, with a brisk autumn wind blowing.

I toured the campus, visiting The Golden Dome and the famous grotto, and watched the Irish band lead the team through campus, playing their iconic fight song, “Victory March.”

Cheer, cheer for old Notre Dame, Wake up the echoes cheering her name, Send a volley cheer on high, Shake down the thunder from the sky. What though the odds be great or small Old Notre Dame will win over all, While her loyal sons are marching Onward to victory. 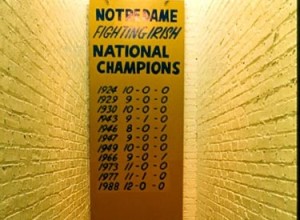 Notre Dame is one of the most storied college football programs, having won 11 national championships. (Photo courtesy Notre Dame Athletics)

When the fight song is played as the golden-helmeted team takes the field, it can give goosebumps to even those who are not Notre Dame fans.

That day in South Bend, BYU played a physical, smashmouth brand of football that shell-shocked the Irish. Running back Jamal Willis rushed for 75 yards and scored two touchdowns, including a game-winning two-yard leap for a score in the fourth quarter. Notre Dame quarterback Ron Powlus was sacked four times, and left the game in the fourth quarter with a concussion.

The Cougars’ stunning upset over the No. 17-ranked Irish upset a lot of folks in South Bend. It prompted questions about coach Lou Holtz’s job security, knocked Notre Dame out of the national rankings for the first time in eight years and marked the fewest points the Irish had scored at home since 1986. Notre Dame finished the season with a 6-5-1 record, just one year after finishing No. 2 in the final polls.

BYU will try to replicate that 1994 win on Saturday in trip No. 6 to South Bend.

In the seconds after that ‘94 game, Cougar running back Hema Heimuli raced toward Holtz and extended his hand.

“I’m a big Lou Holtz fan. I was the first one to shake his hand,” Heimuli recalled. “For me, that was a big deal. He was mad, you could tell. I just said, ‘Great game, coach.’ He acknowledged me and was respectful, but you could tell he wasn’t happy.”

For former longtime BYU assistant coach Lance Reynolds, who retired after last season, that win 19 years ago remains fresh in his mind, adding that it ranks among the greatest in school history.

“It would have to be among the best ones,” he said. “It was at Notre Dame, against a storied program. Anytime you get a win like that, at a place like that, it’s just huge. It was kind of like the Miami game (in 1990).”

Chad Lewis, who played tight end for the Cougars and now serves as an associate athletic director, remembered that as BYU’s team buses left the stadium after the game, Fighting Irish fans put down their coats and blankets and clapped their hands. “Our team stood staring out the window at these people,” Lewis said. “It was totally amazing.”

That ’94 BYU team included backup fullback Kalani Sitake, who is now the defensive coordinator at Utah. It featured wide receiver Tim Nowatzke, who grew up in Michigan City, Ind., located near South Bend. Nowatzke joined the LDS Church while at BYU and he spoke at a pregame fireside in the area with LaVell Edwards.

Heimuli remembers taking a tour of the campus landmarks prior to the ’94 game, which provided an unforgettable experience — one that he shares with his children today.

“You watch ‘Rudy,’ and you hear the stories, then you take a tour and see the Golden Dome and Touchdown Jesus,” he said. “Everything there is just amazing. For me, the win was against a very good team, against a legendary-type team with Lou Holtz. We saw the ‘Play Like A Champion’ sign. We wanted to make sure we saw that sign and touched it. Touching the sign and going through the tunnel, walking on that grass, it makes you understand how much history has been made there.”

“We knew that LaVell Edwards hadn’t won in South Bend. That was important to us,” Lewis remembered. “We wanted to win it for him.”

After the game, “We had the feeling that we belong” in the upper echelon of college football, Lewis added. “We sang Notre Dame’s fight song the whole way while flying home.”

Reynolds, who spent 29 seasons on BYU’s sidelines, understands the significance of playing at Notre Dame.

“It’s a neat place. It’s similar in some ways to us, a spiritual-based, religious-based school,” he said. “They have the grotto where they light candles and pray. They have a statue of Christ that is unbelievable. The people are different than a lot of people. Very welcoming. Very cordial. They are true fans. There was no derogatory, ugly things like you feel other places. It’s very impressive.”

BYU has another opportunity to beat Notre Dame on Saturday. Can the Cougars pull off another win in South Bend?

“When you’re there, you can easily get caught up in the atmosphere and tradition of Notre Dame,” Heimuli said. “It all comes down to the belief factor. Notre Dame trounced us the year before in Provo (in 1993), but at Notre Dame, our players stepped up. The year before we didn’t think we could win and it showed on the field. That was the big difference.”

No matter the outcome, Notre Dame Stadium is a special place to spend a Saturday afternoon in the fall. It’s a college football Mecca, and it’s a place where legends are made. Even though I have visited South Bend several times since 1994, a trip to Notre Dame never gets old.