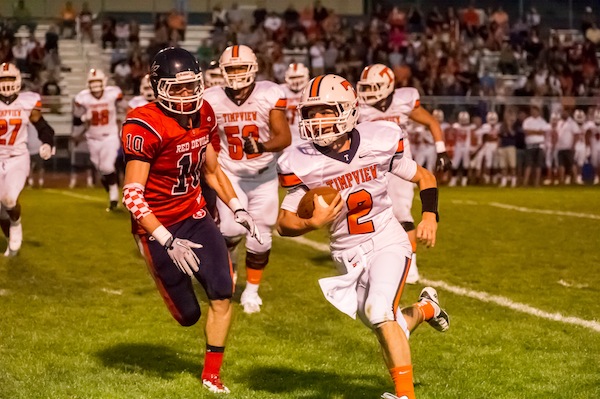 Timpview’s Britain Covey (2) runs the ball up the field. Covey started the season at wide receiver but was moved to quarterback in the third game of the year. The Thunderbirds haven’t lost since and now play East for the state 4A championship. (Photo by Mark Spencer)

Timpview quarterback Britain Covey admits with a laugh that he is 5 feet 8 ½ inches tall, but with his shoes on he’s 5’9″ even though he’s listed at 5’10” on the team roster.

Why is Covey laughing about being a little guy in a sport dominated by giants? 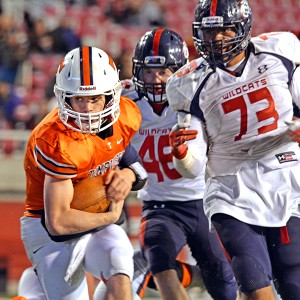 Despite his small frame, Covey has no fear taking on much larger defensive linemen.

There is no place in the game for someone who wears a size medium T-shirt. Perhaps the track team could use him. He could do well on the soccer field but not on the football field where defensive ends, who can bench his weight (160 pounds) 25 times, would like nothing more than to put him in street clothes for the rest of the year.

Covey does play soccer and basketball and will continue to run track, but he’s able to laugh because it’s on the football field where he’s having the most success. On paper, he may be the unlikeliest of players to succeed but he’s still managed to lead Timpview to the state 4A title game against East on Friday at Rice Eccles Stadium.

“It would obviously mean a ton if we can finish this and beat East,” Covey said. “The team has worked at this for 7-8 months and we’ve been together on 13 Friday nights. When you put in that much time you really bond as a team.”

If Timpview (12–1) beats East (13–0), Covey will be the obvious choice to win the state’s Most Valuable Player. He has passed for 1,617 yards in 11 games but what’s most remarkable about his passing numbers is his efficiency. His completion percentage of .709 is unheard of at the high school level.

“He’s taken over and rejuvenated our offense. He’s been very productive and he’s become very dangerous to other teams,” said Timpview coach Cary Whittingham. “His arm is not his strength. His arm is serviceable but he knows what throws he can make and where to get the ball. If you have to put a finger on what he does best, it is breaking down a defense. He makes good decisions and he’s very difficult to touch.”

Even though Covey doesn’t have the strongest arm in the state, he’s been able to be remarkably accurate.  He’s thrown 24 touchdown passes and been intercepted just five times.

“Our offensive coordinator, coach (Mike) Bateman, has done a great job tailoring the offense around my strengths,” Covey said. “Everyone knows I’m not the greatest pocket passer and that I’m best at throwing on the run and using my legs. He’s opened the playbook and we have run the plays that I’m good at.”

If you combine what he’s done in the air with his 1,179 rushing yards and his average of 9.9 yards per carry, you begin to see the game from the press box, an unobstructed view of the entire field. 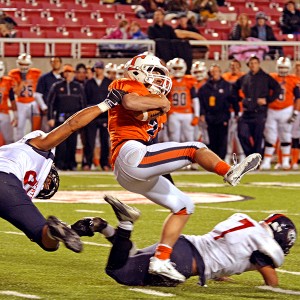 What makes Covey such an interesting athlete to watch is the way he keeps his feet going and extends plays.

This all sounds like the good material for a book.

Since the title “7 Habits of Highly Effective People,” has already been taken (written by Britain’s grandfather Stephen) perhaps a more appropriate title could be “7 Habits of Highly Successful Quarterbacks.” Not a bad idea, but he would have to share the byline with his brothers.

Christian Covey passed for 2,535 yards and 31 touchdowns in 2010 for Timpview and has three state title rings between football and basketball.

Stephen Covey quarterbacked the T-Birds to a state title in 2004 and he finished with a 22–3 record as starting quarterback. He was recruited by BYU as a quarterback before he switched to defensive back.

With so much family football background, it leaves you wondering just one thing: Who starts at quarterback in the family Turkey Bowl?

Whoever it is should have a good rapport with his receiver. Britain’s father Stephen Covey Jr. was a wide receiver at Provo High School, walked on at BYU and played with Steve Young and Jim McMahon.

It looked like Britain Covey would follow in his father’s footsteps at wide receiver when the season started because Isaiah Holloway beat out Covey for the starting job.

Covey was more than fine with his role at wide receiver and on special teams. In Timpview’s first game of the season against Sky View, he caught six passes for 192 yards and scored two touchdowns. He also returned a kickoff 99 yards for a touchdown.

But in the second game of the year, Timpview suffered its only loss of the season, 21-19 to Pleasant Grove. Covey caught just two passes for eight yards but he did return a kickoff 88 yards for a touchdown. It was after that game when the T-Birds decided to make a change at quarterback. Holloway had tendonitis in his arm and the team needed help at defensive back, so Covey started the following week against Alta and the T-Birds never looked back.

Since the Alta game, Timpview has won 11 straight games and now only undefeated East stands in the way of winning back-to-back titles.

“Personally, we believe we are the best team in the state. I think every team has to have that mindset,” Covey said. “I’m hoping we can put up 30 or 40 points on them but their defense is unbelievable so I don’t know how many points it will take to beat them. Our defense is amazing and whatever we score I think it will be enough because I believe we can do it.”

Big talk for a little guy but success does not hang out with doubt, nor does it ever ask for your height and weight. It connects with the IQ and feeds off the heart — all things that are not on a roster.