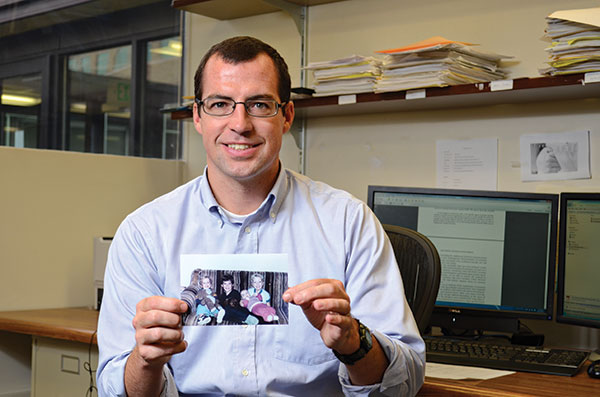 BYU professor Joseph Price is the oldest (his three younger siblings are in the photo with him), and his birth order research has made him particularly conscientious about how much time he spends with each of his own four children. (Photo by Dave Blackhurst)

Is birth order nothing more than family folklore or is it a powerful predictor of personality? We gave two local experts the tall order of deciphering birth order.

The effects of birth order have everything to do with how families use their time, says Joseph Price, an associate professor of economics at BYU.

Joseph discovered that firstborn children receive approximately 3,000 more hours of quality time with parents between the ages of 4 and 13 than the next sibling in line. The only area of activity where middle and youngest children beat out the oldest child was watching television with their parents. Joseph also found that parents also tend to spend less time with their children overall as the family gets older, which means that younger children are getting the least amount of one-on-one interaction.

“The oldest child also tends to drive the entertainment and activity choices for the rest of the family,” Joseph says. “Which means that younger children are going to watch way more movies than their siblings did when they were the same age.”

So what can parents do to keep later-born children from singing the birth order blues?

“Parents can offset these effects by consciously making an effort to read to their younger children at the level they read to their firstborn,” Joseph says. “Find ways to remember what you were doing with your older kids at each age — whether it is keeping a journal, photos, Facebook or blogging — those things will jog your memory.”

And it’s not all bad for the baby of the family.

“One of the major benefits of being a youngest child is that family income tends to increase, which means the younger children might have more options for college or live in a bigger home,” Joe says. 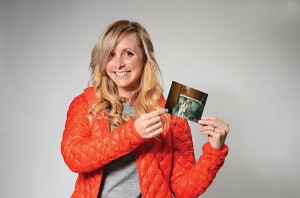 Christie Miller, who is an associate clinical mental health counselor at Suncrest Counseling, is an oldest child with three younger brothers (two of whom are shown in the photo). (Photo by Dave Blackhurst)

Christie Miller, an associate clinical mental health counselor at Suncrest Counseling in American Fork, has always been fascinated by birth order and has studied the work of famous birth order psychologists including Alfred Adler and Frank Sulloway.

“Birth order psychology is definitely more of a theoretical study than a hard science,” Christie says. “But it is a really fun avenue to get to know people.”

Christie is quick to point out that while research has shown certain correlations between birth order and behavior, there are many factors that contribute to a child’s development.

“Birth order is one thread of the tapestry that makes up a relationship between child and parent,” Christie says. “Other factors that may affect quality time are parental/child likeness, introversion vs. extroversion, socioeconomic status, and other psychological and physical factors.”

All those exceptions aside, Christie says she has noticed certain patterns in her clients and can often spot an oldest, middle or youngest child by their personality traits.

“Oldest children tend to be more responsible due to expectations from their parents and societal norms,” she says. “Parental stress and expectation levels tend to decrease as more children are born.”

Christie has noticed that eldest children are less emotionally available and more introverted.

On the flip side, Christie says youngest children are often more extroverted, partially because they were born into a group setting of an already existing family.

Middle children? They are often peacemakers and highly friendship-oriented.

Another important piece of the birth order puzzle is the way parents relate to children with whom they share a similar birth order placement.

“If you were the oldest child in your family, you are more likely to identify with that child because you understand their situation,” Christie says.

Don’t want your younger kids to suffer from the “first come, first served” nature of birth order statistics? Here are some made-to-order tips.

Determine if your own birth order causes you to over-identify with a certain child. If it does, come up with a strategy to balance your interactions with your children.

Open the lines of communication. Christie suggests asking your kids questions like “Do you ever feel like being the oldest puts a lot of pressure on you to do X, Y, Z?” Simply acknowledging birth order and its effects can help children feel heard and understood.

Think about whether you are giving your younger children the same amount of quality time. If not, make it a goal to turn off the TV and pick up books more often.