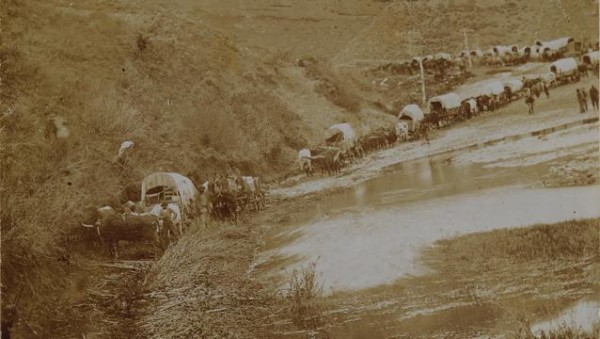 The three-day feast typically referred to as the “first Thanksgiving” took place in 1621 and was made up of wildfowl, corn and venison. Our feasts today generally boast turkey, potatoes, stuffing and pie.

But when it comes to a holiday celebrating gratitude and a healthy portion of food, you can bet the Mormons have a history of their own.

You might think that the pioneers’ first plentiful harvest celebration would have taken place in 1847, a few months after the first Saints’ arrival in the Valley, but there wasn’t enough of a harvest that year to warrant a feast. The pioneers got a late start on planting that summer, and the crops didn’t yield the plentiful harvest  needed to sustain the hundreds of Saints who arrived in the Valley in 1847. It was a difficult winter for the impoverished Saints.

They had high hopes for the 1848 harvest, but those hopes quickly faded. A late frost in May 1848 killed many crops, and a lack of rain caused further difficulty. The warmer summer planting season would have allowed some of the frozen crops to recover, but crickets came on the frost’s heels and destroyed the few healthy plants that remained.

It was a difficult time to live in the Valley—the outlook was so bleak that a few people continued on to California or returned to the United States. But most of the Saints stuck it out, did all they could to preserve their crops, and trusted that God would make up the difference.

It was under these circumstances that the infamous seagulls came to the Salt Lake Valley, consuming the destructive crickets and leaving the Saints with a chance to plant again. And they did. By the time midsummer came, the Saints were hopeful for a plentiful harvest. They believed God had brought the seagulls and provided much-needed assistance. They decided to set aside a day for giving thanks to God—August 10, 1848.

That morning, the Saints brought together a feast and gathered for the celebration. They raised a white flag on a pole—a traditional symbol of freedom—and decorated the pole with wheat, barley, oats and corn. They fired a cannon and a band played. The Saints shouted “Hosannah to God and the Lamb, for ever and ever, Amen.”

And then they ate.

Parley P. Pratt wrote in his autobiography that it was a day of “prayer and thanksgiving, congratulations, songs, speeches, music, dancing, smiling faces and merry hearts. In short, it was a great day with the people … and long to be remembered by those who had suffered and waited anxiously for the results of a first effort to redeem the interior deserts of America.”

Thousands of generous Utahns help the Philippines Next post