Playmakers and headliners of 2013 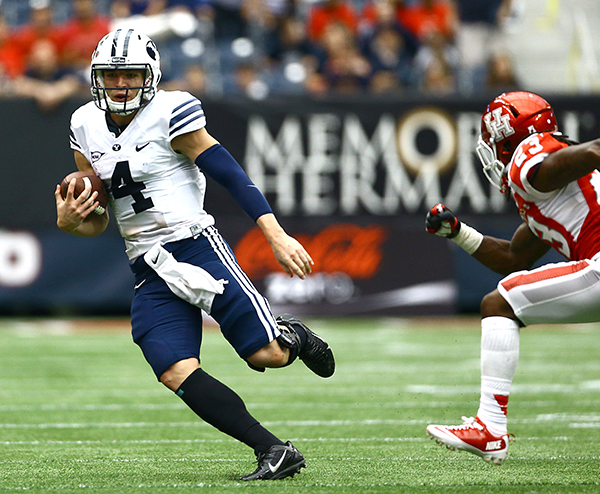 With the exception of the Fight Hunger Bowl on Dec. 27, another BYU football season is in the books.Here’s a recap of the Cougars’ 2013 campaign so far…

Quarterback Taysom Hill completed 29 of 44 passes for 417 yards and four touchdowns in the Cougars’ win over then-undefeated Houston. He also ran 34 times for 128 yards in leading BYU to a dramatic 47-46 victory.

In that game, the Cougars tied the NCAA record for most offensive plays (115) from scrimmage. Hill finished with 545 yards. On the game-winning drive, he threw a beautiful back-shoulder touchdown pass to wide receiver Skyler Ridley. 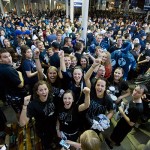 The storm before the Texas game caused a two hour delay. (Photo by BYU Photo)

Before the season began, who would have guessed we’d even have this category?

In the season-opener at Virginia, a lightning storm hit Charlottesville, forcing a two-hour delay after the first quarter. It was a bizarre storm, and somewhat eerie when, in what should have been the middle of the second quarter, the stands were empty.

But the very next week in Provo, another amazing rainstorm rolled through Provo an hour before kickoff. Ominous clouds in the sky looked like something out of “The Wizard of Oz.” The storm fogged up the press box windows, and a torrential downpour forced most fans to find shelter. Kickoff was delayed for two hours.

I give the nod to the storm before the Texas game. 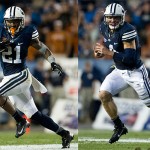 Jamaal Williams (left) and Taysom Hill each rushed for more than 1,000 yards this season. (Photos by BYU Photo)

Hill and Jamaal Williams finished the season having rushed for more than 1,000 yards each. They’re the first BYU duo to reach the 1,000-yard milestone in the same season.

Even when it happened, it was stunning. Virginia defeated BYU in a game that it appeared the Cougars had won — before a costly turnover in the final moments.

As it turned out, the Cavaliers were worse than anyone realized. They finished the season 2-10.

That’s one game BYU would love to have back. 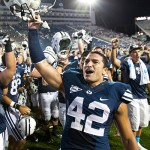 Coming off that humiliating loss at Virginia, many doubted that BYU would beat then-nationally ranked Texas at home.

But the Cougars did, and in resounding fashion.

Hill ran for a 259 yards and scored three touchdowns, and the Cougars rushed for a school-record 550 yards.

The next day, the Longhorns fired defensive coordinator Manny Diaz.

Coach Bronco Mendenhall was not happy, saying he was “maybe as mad as I’ve been as the coach at BYU.”

The Cougars looked listless and uninspired in the first half.

His team responded, scoring four touchdowns on its four first possessions of the second half en route to a 28-23 win. 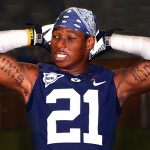 Jamaal Williams is not fond of playing in the snow or rain. (Photo by Matt Bennett)

“With all my might, I hate the snow, I hate the rain, I hate the cold. I just have to play in it. It just gets me mad. It makes it better for the game because I’m really mad when it’s snowing and raining. When it’s sunny, I’ll be thanking God every day. Hopefully, it won’t rain or snow. But if I’d rather take snow than rain. But if it snows, you won’t see a smile on my face the whole game.” 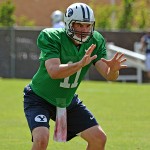 On Senior Day, senior quarterback Jason Munns could have received significant playing time against lowly Idaho State. Instead, the week of the game, he told coaches he’d rather see the younger quarterbacks get a shot to play in order to gain some experience. 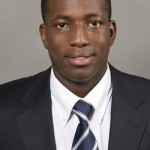 Fortunately for the Cougars, junior college transfer Robertson Daniel stepped up and helped solidify BYU secondary. His impact was bigger than anyone expected. 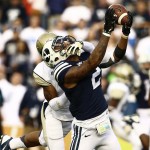 It will go down as one of the best catches in BYU history.

Wide receiver Cody Hoffman made a leaping, diving grab in the end zone with a Georgia Tech defender draped all over him for a touchdown. Officials actually called a pass interference on a Yellow Jacket defender on the play, but Hoffman still hung on to the ball.

Yeah, it made that SportsCenter’s Top 10 that night. 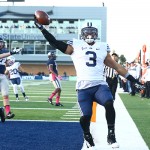 Kyle Van Noy intercepts a ball for a touchdown in a game against Utah State. (Photo by BYU Photo)

Utah State was hyped, as usual, when BYU came to Romney Stadium in early October. The Aggie crowd was raucous.

That is, until the first play from scrimmage, when linebacker Kyle Van Noy picked off quarterback Chuckie Keeton and waltzed in for a touchdown, essentially taking the crowd out of the game and giving BYU a 7-0 lead. The Cougars ended up winning, 31-14. 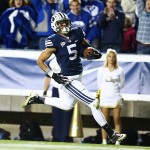 Alani Fua ran 51 yards for a touchdown against the Yellow Jackets. (Photo by BYU Photo)

After Van Noy’s interception return for a touchdown, linebacker Alani Fua’s pick-six in the fourth quarter was almost as important in helping to seal a win over Georgia Tech.

Fua leaped up and snatched a Vad Lee pass out of the air and sprinted 51 yards for a big TD against the Yellow Jackets.

The Cougars finalized a four-game series with Stanford beginning in 2020 and concluding in 2025. Two of those games, both on Thanksgiving weekend, will be played at Stanford Stadium.

When BYU beat Boise State in October, it was not only the Cougars’ first-ever win over the Broncos, but it also ended a 21-game losing streak for teams from the state of Utah against Boise State.

Just as impressively, the loss snapped a streak of 50 consecutive victories for the Broncos in the month of October, a streak that dated back to 2001. 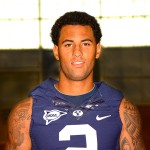 Going into the Wisconsin game, Hoffman needed 14 yards to eclipse Austin Collie for the top spot in receiving yards.

The record-breaker came, fittingly, on an impressive 34-yard touchdown catch midway through the third quarter that cut BYU’s deficit to 20-10.

During BYU’s loss to Utah in September, Williams lay motionless on the turf at LaVell Edward Stadium after gaining a first down.

The crowd of 64,000 at the stadium went silent as medical personnel attended toWilliams. He was placed on a backboard, and taken to the hospital.

Before leaving, Williams had a message for his worried mom, Nicolle, who went on to the field to check on her son. “When they put him on the cart,” Nicolle said, “he told me, ‘Mom, I’m OK.’ That’s when I knew that he’d be OK. Jamaal’s like, ‘You don’t cry when I score a touchdown, so you can’t cry if I get hurt.’ It’s funny, because he was uplifting me when I should have been uplifting him. But that’s Jamaal.”

As it turned out, Williams suffered only a concussion and shoulder stinger. He missed only one game. Kyle Van Noy proposed to Marissa Powell after his homecoming game in Nevada.

BYU’s Homecoming victory over Georgia Tech was impressive, but Van Noy’s return to his hometown of Reno in his final regular-season game as a Cougar was a memorable experience for Van Noy.

He spoke at the pregame fireside on Friday night in front of a packed Stake Center, then he thwarted a Nevada two-point conversion attempt in the waning minutes of BYU’s win.

But the best part came the next day — when Van Noy proposed to his girlfriend, Miss Utah Marissa Powell.