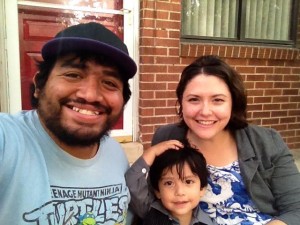 James Estrada (left) decided to stay at home with his son Joah when they lost their nanny in 2011. His wife, Analisa Estrada (right), works as full-time graphic designer. (Photo courtesy James Estrada)

As a stay-at-home parent, James Estrada is an atypical Utah father. When he and his wife, Analisa, welcomed their son Joah to their family in March 2011, they both planned to continue their career paths. Analisa was working as an in-house graphic designer for 1-800-Contacts and James was studying audio engineering at Utah Valley University while working part-time. When Analisa’s maternity leave ended, they hired a nanny, but after nine months, she got married and moved away, leaving the Estradas with a pressing need for an alternate plan.

“I finished out the semester just taking my son to school with me,” James said. “Luckily I was in a program where the teachers didn’t care, but we decided that despite that, it wasn’t the best thing.”

Because of their conflicting schedules, James and Analisa rarely saw each other, so they made a change. Analisa made more money and had better job security. So in January 2012, James began staying home with Joah full time, joining the ranks of more than 176,000 stay-at-home fathers in the United States, according to the U.S. Census Bureau, a number that’s doubled in the past decade.

“At first it was hard on me,” James said. “I had these ambitions and goals for my career, and I felt like I was giving up on my dreams. I think a lot of stay-at-home parents go through this.”

But eventually he found ways to continue progressing professionally, working on small audio engineering projects after Analisa and Joah went to sleep. Unfortunately, that wasn’t the only hurdle to jump.

“There’s a stigma that gets put on men who decide to stay at home,” he said. “A lot of people think that stay-at-home dads are lazy, deadbeat dads who want to watch cartoons all day.”

On one particularly traumatic occasion, a stranger he met while riding Trax told him as much, promoting a misconception that most stay-at-home fathers have been fired from their jobs. According to a 2012 study by the Boston College Center for Work & Family, for most stay-at-home fathers, it’s a choice, not something they were forced into by job loss.

“Luckily for me, I have a very supportive family around me,” he said. “My wife, parents and siblings are supportive of our situation, because it’s what works for us.”

Finding welcoming playgroups is another major challenge for James, but he’s been solutions-oriented with that problem as well. When he realized moms in many local playgroups are uncomfortable with dads participating, he started a Facebook group to connect with other stay-at-home dads. The group, “Stay at Home Dads of Utah,” is still in a fledgling state, but James has found some success with it. He’s made a few friends and gotten a some ideas about fun, inexpensive activities to do with Joah around town. James has reached out to national organizations like the National At-Home Dad Network for connection and support and plans to attend a stay-at-home dads conference in Denver next year.

“At-home dads would like equal respect for their role as primary caregivers,” said Hogan Hilling, one of the conference organizers. “We’re not here to invade mom’s turf. We’re here for our children and we’re not going away.”

Likewise, James isn’t going away from this lifestyle choice. He feels the biggest challenge of all is simply having the courage to do what’s best for his family.

“Stay-at-home dads and stay-at-home moms just want to be doing what’s best for their kids,” he said. “Sometimes we have to put ourselves in uncomfortable situations if it enriches our children’s lives in the end.”