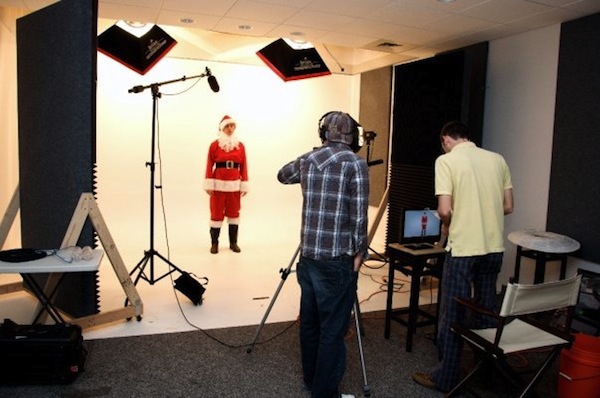 “The Orabrush Guy” Austin Craig dresses in a Santa Suit for the filming of “the Stench that Stole Christmas.” The Orabrush YouTube channel has almost 200,000 subscribers and more than 42 million views. (Photo courtesy Austin Craig)

The Beehive State ranks No. 3 in the world for YouTube celebrities, and just about all of them gained their fame right here in Utah Valley, according to Plaid Social Labs.

“Utah Valley has the first group of Utubers that have come out with true high-end production,”  said Ricky Ray Butler,  founder and president of Plaid Social Labs in Provo. “The production value that comes from this state has been the best when it comes to cinematography and beautiful content.”

Like many YouTube entrepreneurs, Butler studied marketing at Brigham Young University. He saw an untapped opportunity in YouTube advertising and started Plaid Social Labs, which is the largest advertising agency in the world that focuses on YouTube celebrities.

“I remember browsing through YouTube and finding these channels that weren’t just doing viral videos — they were having consistently high views,” Butler said. “I remember wanting to see how effective it would be to advertise a brand on those channels. It’s really the future of advertising.”

One of Butler’s clients is Orabrush, the makers of a bad-breath-fighting tongue cleaner and tongue foam. Along with Blendtec’s “Will it Blend” campaign, Orabrush was one of the pioneers in Youtube marketing success. Orabrush’s inventor, Bob Wagstaff, turned to YouTube videos as a last resort to get his company off the ground. It worked. Orabrush has sold more than 3 million Orabrushes and is in more than 30,000 retail locations. 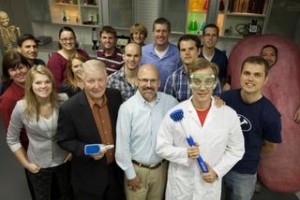 YouTube star Austin Craig poses for a picture with the Orabrush team. Orabrush went from having little chance of success to selling 3 million Orabrushes (and counting) — all because of YouTube. (Photo courtesy Austin Craig)

Provo’s Austin Craig is the star of many of Orabrush’s YouTube videos. When a stranger stops him and tells him he looks really familiar, he knows they recognize him as “The Orabrush Guy.” He’s most popular for Orabrush’s “Bad Breath Test” video, the company’s first and most-watched YouTube video, with more than 18 million views.

“Part of what worked so well was our timing,” Craig said. “YouTube had just opened up paid search in the summer of 2009, just as we started our campaign. It was a wide open field with very low costs and few competitors. We also watched a lot of popular videos, finding common traits across successful videos and campaigns that we could work into our own productions.”

But Orabrush isn’t the only Utah Valley company that has seen huge success thanks to YouTube. There are 12 plus local Utubers with videos bringing in between 1 and 78 million viewers, and some of them are making millions of dollars. But why is our little valley such a YouTube moneymaking machine?

“We have a lot of creative people here in Utah Valley,” Craig said. “None of this would be happening if we didn’t have such talented musicians, adventurers, comedians and even magicians here to make videos with.”

Craig says a lot of the YouTube success that comes out of Utah can be traced back to Orabrush. The company’s videographer, Devin Graham, shot Orabrush’s first videos and went on to create his own wildly successful YouTube channel. He has helped other local YouTube celebrities reach success, including Lindsey Stirling and ScottDW. Former Orabrush art director Daniel Harmon coached The Piano Guys as they created their YouTube channel, and Stuart Edge, best known for his video where he approaches strangers and holds their hand, started as an intern at Orabrush, and now has over a million subscribers to his channel.

But whether it’s cute kittens flying in slow motion to hip hop music or swinging in Moab on the world’s largest rope swing, Craig says success on YouTube starts and ends with interesting content.

“At the end of the day, the most important thing on YouTube, social media or any media is good content. If what you’re making is good, people will find it and people will share it. That’ll never change.”

In the “Will it Blend?” videos by Blendtec in Orem, Blendtec founder Tom Dickson blends marbles, smartphones, silly putty, the world’s largest gummy bear, a crow bar, iPhones and an iPad, and that’s just the beginning. Or the end, for those poor inanimate objects.

Orabrush’s YouTube videos feature “The Diary of the Dirty Tongue” and other comical clips to help you improve your stinkin’ breath.

Lindsey Stirling is a hip-hop violinist who started gaining fame while she was a student at BYU. In her most popular video, “Crystallize,” she plays the violin and dances in front of a backdrop of illuminated ice formations. “Crystallize” was the eighth most watched YouTube video in 2012 and now has 78 million+ views. Her cover of “Radioactive” by Imagine Dragons (another sensation with Utah Valley roots), won Response of the Year in YouTube’s 2013 Music Awards. Lindsey was also featured by the LDS Church in an I’m a Mormon campaign video.

We couldn’t help but share this heartwarming video of an Orem couple singing “You are my Sunshine” together while the husband, James, is in the hospital being treated for a blood infection. (1 million+ views)

In Hales’ videos, he walks up to strangers and hugs them, smells them and in his most popular video (with 8 million+ views), holds their hands. You’ll feel pleasantly awkward while watching them. Find Hales’ stuff on his channel, LAHWF.

Four brothers (Brett, John, Dave and Randy Roberts) plus honorary brother Richard Sharrah create the crazy-popular “Kid History” videos where kids tell stories and the brothers lip-sync and act to their voices. They are also known for Kid Snippets, Kid Remix, Autocorrect Awareness, Kid Movie Trailers and more, all found on their channel, Bored Shorts TV.  Laugh along to their most popular video, “Punching Cars” (3 million+ views). (Still want more Kid History history? Check out our feature on them, here.)

The Piano Guys can be found playing piano and cello renditions of everything from classics to pop music in front of awe-inspiring backdrops like the top of Red Stone mountain and the group’s longtime dream location, the Great Wall of China. (4 million+ views)

Star Wars fans (and even the less Star Wars-inclined) will appreciate Teddie Films’ clever “The Star Wars That I Used To Know” parody. (13.6 million views)