Nobody harmed in Freedom Elementary fire 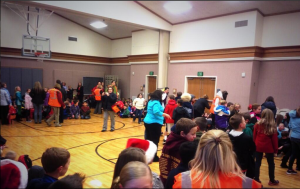 Students from Freedom Elementary School in Alpine wait in the LDS Stake Center gym across the street from the school while a fire was extinguished Thursday morning. (Photo courtesy of Lone Peak Police)

ALPINE — Nobody was harmed by the auditorium fire at Freedom Elementary School on Thursday morning.

A parent dropping off its kid at school noticed smoke coming from the school and reported it to a staff member. The school proceeded to call 911 around 8 a.m. and evacuate everyone from the building, according to Joseph McRae, battalion chief at Lone Peak Police.

The about 600 students already at school were taken to the LDS Stake Center across to street to wait somewhere warm.

Firefighters extinguished the auditorium stage fire, but there was heavy smoke.

“The fire was fairly small,” McRae said. “We’re not sure what the cause is right now, but that is under investigation by the State Fire Marshal Department.”

After firefighters investigated whether it would be safe, the students and staff were permitted to return to the school. However, the other 600 students who were scheduled to arrive to Freedom Elementary at 9:30 a.m. were temporarily turned away while the situation was evaluated and still haven’t arrived at school.

“All of those school drills that seem monotonous paid off,” McRae said. “I commend Alpine School District and the staff here.”