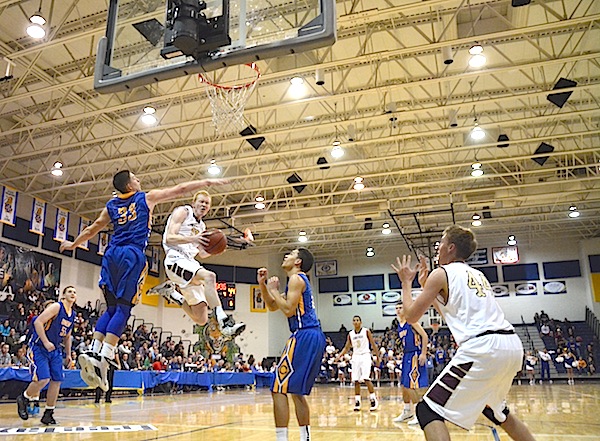 Lone Peak guard TJ Haws drives to the basket in a game against Orem High School during the Great Western Shootout. The Knights won the game (Photo by Rebecca Lane)

You can’t make everyone happy.

The three-day tournament featured four teams from out of state. Foothill from Las Vegas, Denver East and Overland from Colorado and Bishop O’Connell from Virginia were matched up against Utah teams Lone Peak, American Fork, Orem and Bingham.

For the three Utah Valley teams the results were mixed. American Fork was pleased with its 2–1 record but the Cavemen couldn’t help but feel they should have been 3–0. 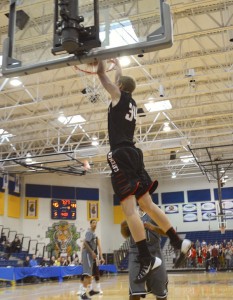 American Fork’s Tyler Rawson dunks the ball during a game in the Great Western Shootout. (Photo by Rebecca Lane)

Lone Peak tried to put on a happy face after going 2–1, and Orem wasn’t sure how to explain its 0–3 record other than the Tigers were just trying to be a gracious host.

It didn’t take long to realize that the FreeTaxUSA.com Great Western Shootout would be much different from last year.

In the opening game, Bingham, considered to be the weakest of the Utah teams, upset Bishop O’Connell (Virginia), a team that finished last year ranked No. 15th nationally with a 30–7 record.

The upsets continued when Lone Peak, last year’s national champion, fell to Overland (Colorado) 70–63. The Knights opened the season with a win over Cottonwood and were ranked No. 15 by USA Today.

If that wasn’t surprising enough Foothill (Las Vegas), a team that went 0–3 in last year’s tournament, rolled over Orem, 85–61.

Denver East charged back from a double-digit deficit in the second half to beat American Fork 68–67.

Friday’s action gave sports fans a glimpse of why high school basketball can be addicting.

The day started with the most bizarre game of the tournament. American Fork’s Brendan Bailey knocked down a clutch 3-pointer with six seconds left to tie the game at 63 but when Overland inbounded the ball, an American Fork player, thinking the Cavemen still trailed, immediately committed a foul.

The Trailblazers were sent to the free-throw line for a one-and-one with four seconds remaining. Overland missed the free throw. Tyler Rawson grabbed the rebound and got it to Bailey, who rushed a shot that was off the mark but Ryan Andrus was there for the follow at the buzzer giving the Cavemen the win and starting a mob scene at center court. Fans poured on the court like it was a state championship game.

That was just a glimpse of what was to come when Lone Peak took the court against Bishop O’Connell. 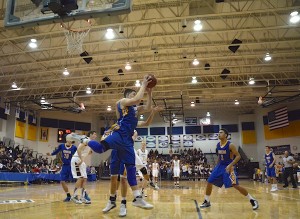 The game was tied and appeared headed to overtime but that was before Lone Peak senior TJ Haws got the ball in his hands and dribbled down court. He knocked down a 35-foot shot at the buzzer that gave the Knights a 49–46 win.

Lone Peak fans could not contain their enthusiasm. They charged the court, raised Haws on their shoulders and paraded him around the court.

It sounds like a made-for-TV event, and it was. KMYU televised the game and SFAN.TV streamed the game live.

Fittingly, a fireworks show followed outside. Despite some initial reluctance, most of the fans put on their coats and went outside in the frigid temperatures the fireworks show.

Saturday’s highlights included a Lone Peak win over Orem, which didn’t seem to bother Utah Governor Herbert too much. The Orem alumni presented four $2,500 scholarships to a student from each Utah school that participated in the tournament.

It took the effort of 51 volunteers, an army of host families and several major sponsors to make the event happen but when it was all over, Orem coach Golden Holt, who was the tournament director was pleased.

“This years FreeTaxUSA.com Great Western Shootout met or exceeded all of my expectations,” Holt said. “The quality of teams, competition, sponsors and volunteers was truly outstanding.  I am grateful to all that made this a first class event for the community happen.”

Not bad for a tournament in just its third year.

To tow or not to tow: Provo council to vote on changes Next post