The elf much too big for a shelf 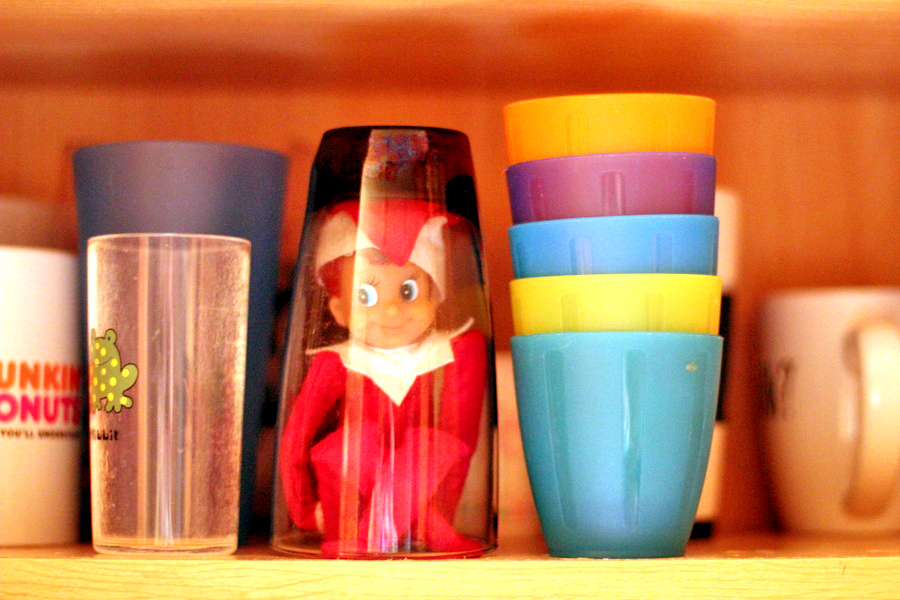 If Facebook is any indication, The Elf on the Shelf has been crazy busy this holiday season.

In some homes he’s writing Shakespearean sonnets with Scrabble letters. In others he’s taking bubble baths in mini marshmallows or recreating Whistler paintings. In some houses he’s even getting into mischief, making snow angels in spilled flour and shaving a stripe in Dad’s hair at night. It’s in these “mischief” homes where the holiday tradition has gone grossly awry. If you’ve read The Elf on the Shelf’s accompanying book by Carol Aebersold and Chanda Bell, you know he isn’t supposed to make trouble. This is a paraphrase and it doesn’t rhyme, but The Elf on the Shelf is just supposed to sit there, all benevolent and judge-y, while parents air grievances to him and threaten to write their children’s names on Santa’s naughty list in permanent marker.

Last year, I overheard one of my kids tattling on a sibling to our Elf on the Shelf, Cougar. You can imagine what a proud mother moment it was for me. Besides being a good listener, our Cougar is a lazy toymaker-nark. Sometimes he hides in the potted plant. Sometimes he literally just sits on a shelf. There are days when he forgets to move at all, and it says a lot about my kids and their low expectations that finding him is a highlight of their December mornings.

I adore The Elf on the Shelf with all my heart. But most days I just look at him and wait for him to turn into a 6-foot, 5-inch, 220-pound man. If this sounds weird, and I know it does, it’s because as a child I had a live, breathing elf named Morgan visit my home every December. He was dressed in bright-red ski bibs and a flannel shirt, his white felt beard secured with toothpaste. He looked a lot like my Dad, the guy who was conveniently off showering every time Morgan came to visit. Morgan would bring us each a small gift and quiz us about our recent behavior, which he would then report back to Santa.

Nowadays everyone has an elf hanging about, but 20 years ago this was really something special.

I’m the oldest of 11 children, the youngest of whom is about to turn 9. As teenagers, my siblings and I put a big-hearted, self-sacrificing man through an emotional meat grinder. There was a lot of self-doubt and hand wringing on my dad’s part, as there is for every parent who is totally getting it right but whose children still insist on making dumb choices. When he was going through the worst of it, I wish I had thought to remind him of a certain pair of ski bibs and a toothpaste-stained felt beard. You can’t own those things as a parent and be anything but awesome.

I’m always so touched by the lengths that moms and dads will go to in order to make the holidays magical for their children. When I see a house with seven snowman inflatables, or a video of a glowing igloo made out of milk jugs, or a Facebook posting with an elaborate Elf on the Shelf diorama, I know I’m witnessing great parenting.

A few months ago, my dad developed multiple blood clots in his lungs. He almost died in the same emergency room where he has worked as a doctor for 35 years, giving other families one of life’s most precious gifts: more time. Sometimes the most important things in life are wrenched unexpectedly from us. Sometimes we get another day. It’s frankly a miracle my dad lived, and I know what a gift this extra time with him is.  That’s why the thing I want most for Christmas this year is for my own children to sit on Morgan’s lap, to have a little piece of that holiday magic. My dad will be in the shower and will miss the whole thing, but we’ll tell him about how great it was later.

In the meantime, our Elf on the Shelf Cougar will have to forgive me if my aiding and abetting is half-hearted. I’m holding out for the real thing.

Unto all the world: The LDS Church's growth in Africa Previous post