Imagine Dragons’ “On Top of the World” is the feel-good song of the year. And the music video — co-directed by Utah Valley locals Matt Eastin and Corey Fox — follows suit. The video was filmed entirely in Utah County and depicts the band participating in a staged moon landing that turns into an Imagine Dragons concert. Here are 15 behind-the-scenes tidbits about the video.

1. Jon Heder cameos as a Russian cosmonaut with the “Friends” monkey.

Jon Heder, the star of Napoleon Dynamite, makes a cameo as a Russian cosmonaut. His fellow cosmonauts include members of Provo bands The New Electric Sound and Toy Bombs. The video also includes a cameo from a former “Friends” cast member. The monkey perched on one of the cosmonaut’s shoulder is the same monkey who played Ross’ pet monkey in “Friends.”

2. A secret message appears in the license plate behind the band. 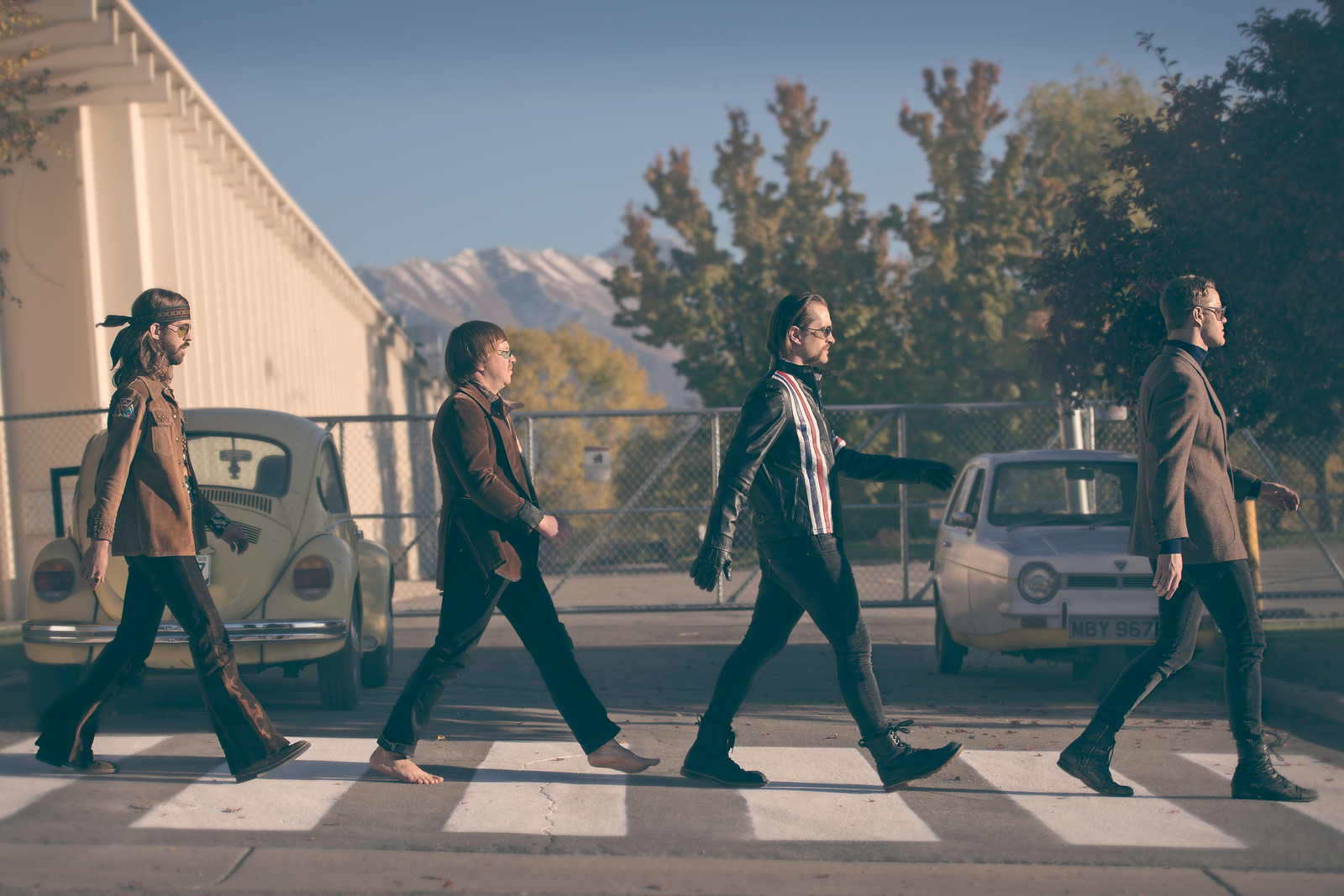 In the crosswalk scene that resembles the Beatles’ Abbey Road album cover, one of the license plates briefly reads “Ben is dead” as a tribute to the “Paul is Dead” conspiracy theory. This scene was shot at the KBYU building in Provo.

3. Stanley Kubrick, who supposedly “faked” the 1969 Apollo moon landing, is referenced in the store window.

The window filled with old televisions reads “Stan and Brick Appliances,” a reference to  Stanley Kubrick, the famous director who supposedly “faked” the famous Apollo moon landing in 1969. This scene was shot on Provo Center Street at The Great Salt Lake Guitar Company. You can also spot Robbie Connolly of Fictionist and Studio C cast members in this shot. 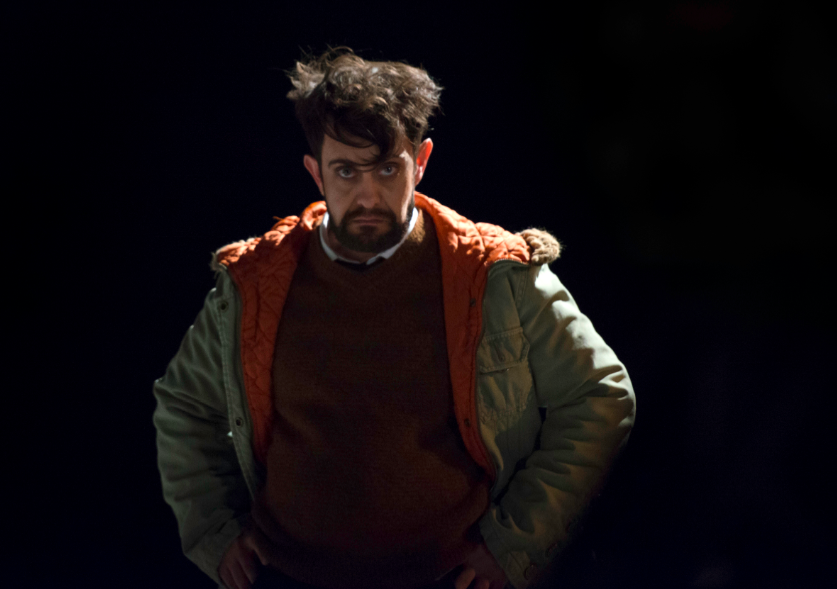 Utah native Whit Hertford, famous for his roles in “Jurassic Park” and “Full House,” starred as Stanley Kubrick in the video. Whit recently moved back to Utah County to work on a new script. 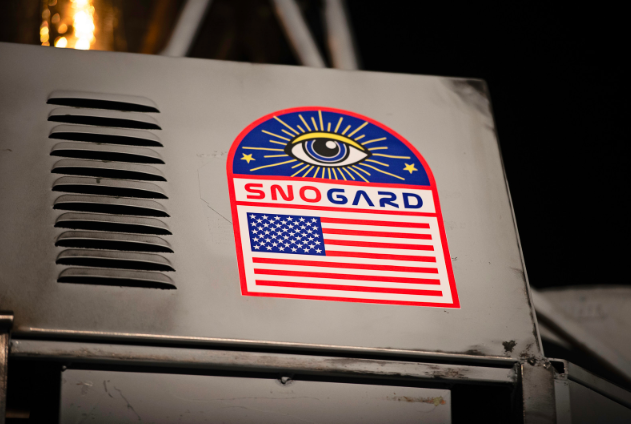 A recurring logo in the video reads Snogard. The logo was created because NASA doesn’t allow their logo to be used without approval. “Snogard” is simply Dragons backwards. Corey designed the logo.

6. President Richard Nixon was played by Marvin Payne, famous for his role in “Saturday’s Warrior.” 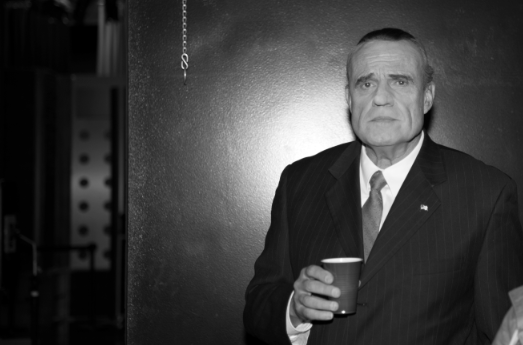 You may not recognize him because of the prosthetic nose, but Marvin Payne (famous for his role in “Saturday’s Warrior“) is the actor who portrayed President Richard Nixon. The nose was created by local hair/makeup artist Danielle Donahue. Side note: Rumor has it that Marvin was a surprisingly good dancer on set!

7. The entire moon set was shot in one of the BYUtv studios. 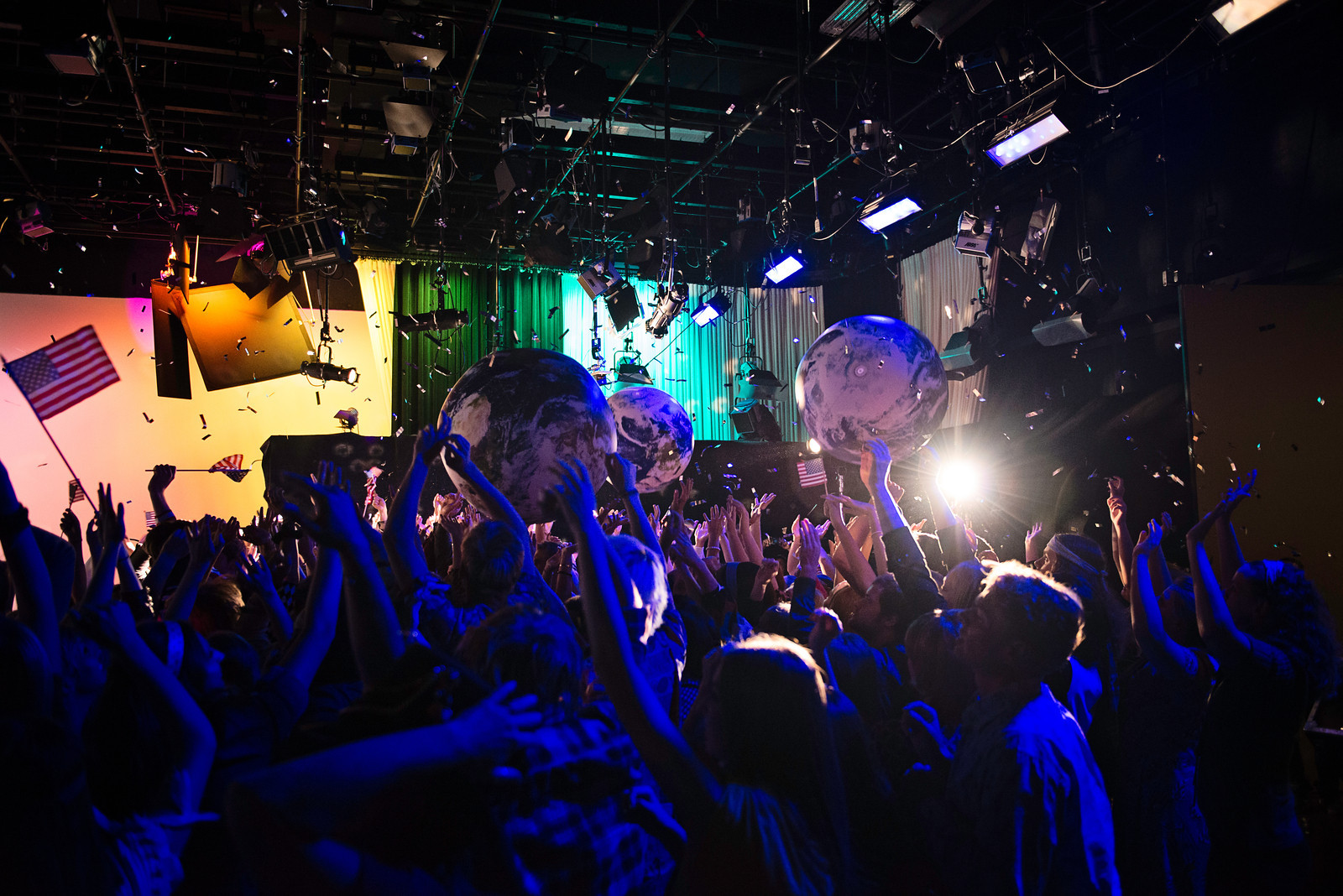 To set the scene, Matt and Corey brought in seven tons of crushed limestone, a moon buggy, a 6-foot-tall inflatable Earth globe, a moon lander and more than 200 extras dressed in 1960s clothing.

8.  The moon lander was built by Lehi sculptor Andrew Smith. 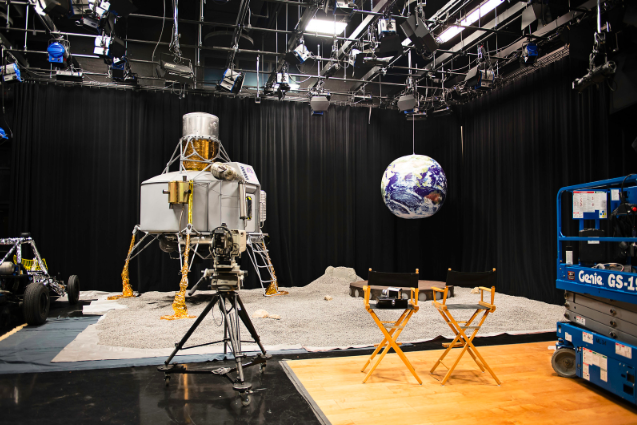 Smith used an 1,100 gallon water tank as the core. After the shoot, he put the lander in his backyard so that his kids could use it as a fort. 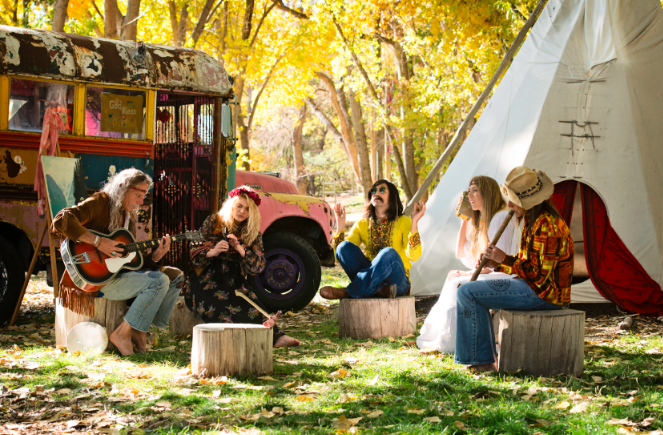 This is why you’ll recognize  familiar “Studio C” faces. Matt and Jared became friends while working together on BYUtv’s “Audio-Files.”

10. The hippie scene was shot at CLAS Ropes in Provo. 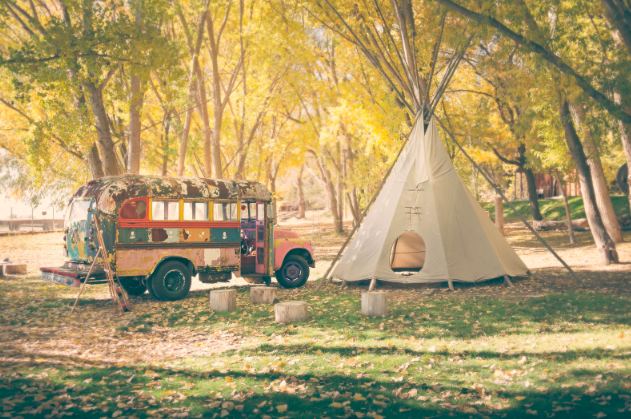 The hippie scene included a 15-foot-tall teepee, a yellow VW bug, a drum circle and an authentic hippie bus.

11. The video was executed under a very tight deadline. 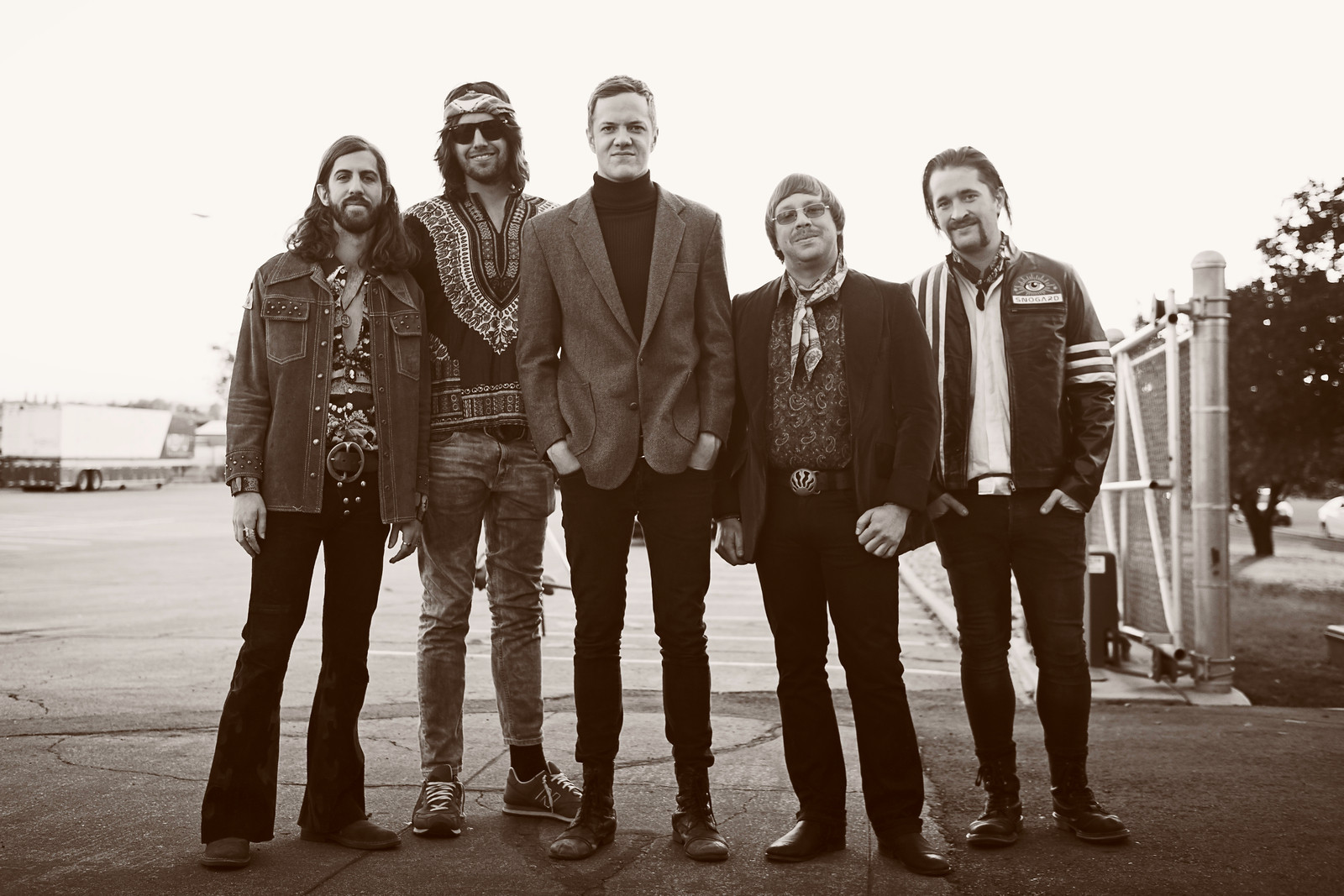 It went from script to YouTube in 4.5 weeks. Needless to say, Matt and Corey didn’t sleep much in October. (Matt is second from  left in this photo).

12. The exteriors of the homes are all located in Provo. Because the video was shot in October, the crew had to hide or remove Halloween decorations.

13. The “mission control” scene was done in a retired KBYU broadcast truck. 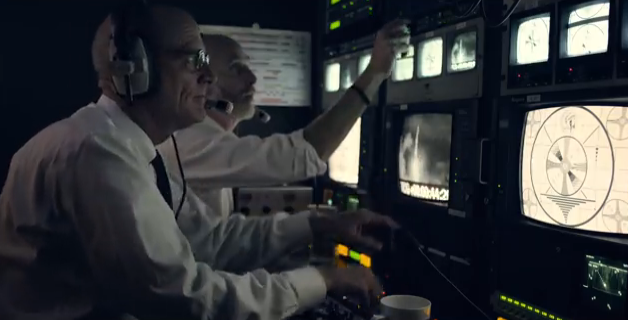 14. Lead Singer Dan Reynolds sacrificed by really falling on the rocks for a more authentic look. In the scene where the landing is revealed as a hoax, lead singer Dan Reynolds gets bumped by a microphone and falls off of a ladder. The original idea involved Dan landing on padded blankets off camera, but he insisted on falling directly on the rocks to look more authentic. This was done in six takes.  Talk about a true rock star.

15. The Apollo moon suits that were used in the video were purchased from a space camp in Texas. Those suits are currently being prepped for a display at the Hard Rock Hotel in Las Vegas.