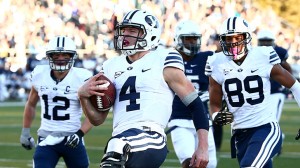 Sophomore quarterback Taysom Hill passed for 2,919 yards through the air and 1,354 on the ground this season. (Photo by BYU Photo)

Despite gritty efforts from Taysom Hill and Cody Hoffman, the BYU Cougars couldn’t overcome a strong Washington running game and some untimely miscues, losing to the Huskies 31–16 in the Fight Hunger Bowl on Dec. 27.

The Cougars (8–5) out-gained the Huskies in nearly every category, but settled for three field goals while Washington put it in the end zone on every red zone trip.

Hill finished 22–40 for 274 yards with a late interception and rushed for another 143 yards on 29 attempts and the only BYU touchdown. Hoffman, in his last game as a Cougar, had one of his best days, catching 12 passes for 167 yards in the loss.

“Taysom (Hill) led our team really well,” BYU head coach Bronco Mendenhall told ESPN.com. “He played hard, he played physical. He gave us a great chance to win the game and stay in it.”

The Huskies (9–4) started quickly, moving the ball down the field on a 12-play drive, capped off by Bishop Sankey’s 11-yard touchdown run. Sankey added another score from the same distance later in the game, finishing with 95 yards on 21 attempts before leaving the game late in the third quarter with a hand injury.

BYU tied the game in the second quarter when the offense gained momentum and moved 88 yards in 12 plays, capped off by Hill’s one-yard scoring plunge.

But the ensuing kickoff doomed the Cougars as John Ross took the kick from his own goal line and shot through the BYU coverage team untouched for a 100-yard return to swing the momentum fully in Washington’s favor, as the Huskies never looked back.

The Cougars had their scoring chances, getting into the red zone on two consecutive possessions, but came away with just two field goals by Justin Sorensen, the first of which setting a new season high at 45 yards. The Huskies, up just 14–13, returned the kick 47 yards to set up Sankey’s second touchdown of the day, putting the game firmly in their hands.

“I told my team I was proud of them,” Mendenhall said. “I liked how hard they played. Our special teams needed to execute better.”

After BYU added another field goal to close the gap to 21–16, Washington quarterback Keith Price found his tight end Austin Seferian-Jenkins for a 16-yard touchdown to increase the Husky lead to two scores, where it would stay the rest of the game. Price finished 16–21 for 112 yards with the touchdown and an interception by Robertson Daniel, but also left the game after the third quarter with a rib injury.

Hill finished 79 passing yards short of becoming just the seventh player in FBS history to pass for 3,000 yards and rush for 1,000 in the same season. He finished with 2,919 yards through the air and 1,354 on the ground, scoring 29 total touchdowns on the year. Fellow running mate Jamaal Williams also finished over the mark, with 1,232 yards rushing, but could only muster 30 yards in the bowl game.

“(The defense) came down in man pressure, pushed us out of bounds and we missed a few opportunities that way,” Hill said. “Guys come up and load the box, we need to be able to throw the ball. As a quarterback, that’s what you want.”

With the 2013 year in the books, the Cougars can set their sights on next year, where young players like Hill and Williams can look to shine even brighter.