Lone Peak’s Frank Jackson on why he chose BYU 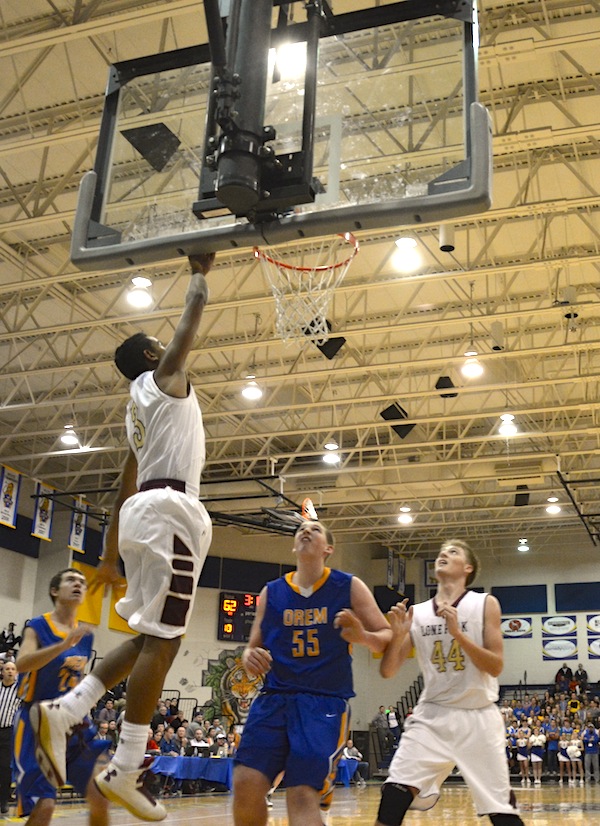 Lone Peak sophomore Frank Jackson drives the ball to the basket for a layup in a game against Orem High. Jackson has verbally committed to BYU’s basketball team for the 2018 season. (Photo by Rebecca Lane)

Lone Peak guard Frank Jackson could have taken recruiting trips all over the country and been pursued by some of the best college teams in the country. He could have been Utah’s hottest free agent.

So why would a budding superstar not want to see what options were available before verbally committing to BYU.  It would be like ordering from the menu before he even sat down.

“As a young kid I always wanted to go to BYU. I went to my first basketball camp there when I was in the fifth grade,” Jackson said. “I’ve always liked the campus, so when I got the offer I was really excited and decided to commit to them.”

Jackson verbally committed to BYU in September before his high school sophomore season ever started. and it happened just as he was starting to show up on the radar of Division I coaches.

“Certain kids are just BYU kids. They just want to be BYU recruits and that’s the end of it. Frank is one of those kids,” said Lone Peak coach Quincy Lewis. “He is interested in BYU as a school and they have had a lot of success, so I think those two things combined were enough to convince him there was no reason to go through the whole recruiting process.”

Jackson was born in Washington, D.C. When Jackson was 11, his family moved to Oregon. A year and half later they moved to Lehi where they had maintained a summer home. It was after the move to Utah that he began making a name for himself on the court.

“Franklin is very unusual for a kid his age. He didn’t need the notoriety of the recruiting process,” said Al Jackson, Frank’s father. “Some of the kids his age were telling him he should take recruiting trips to Kentucky or Stanford, but he wasn’t interested in that.”

The first official campus visit Jackson made was to the University of Utah in early September of this year. Jackson liked what the Utes had to offer, but a visit to BYU shortly thereafter led to an offer that he couldn’t turn down.

During his visit to BYU, the coaching staff created a mock roster for 2018. It included two former Lone Peak players in Eric Mika and Nick Emery along with his current teammate TJ Haws.

But what sold Jackson more than who he would be playing with and how many points the team would score per game was an inspiring video.

“They also showed me a video of Tyler Haws, who went on a mission. I’m LDS so it had an impact on me,” Frank Jackson said. “It showed that you could serve a mission and come back strong. I want to serve a full-time mission and do what Tyler has done.”

Serving a mission was a key factor in his decision. Jackson has an older sister who is attending BYU and will be leaving to serve an LDS Church mission to Peru soon. He plans on following her example and serving a mission after he graduates from Lone Peak, which puts him on track to play for BYU in 2018.

The Cougars believe he will be worth the wait. Jackson averaged 10 points per game as a freshman at Lehi High School. Following his freshman year, the family moved to Highland.

Jackson is now starting for Lone Peak. He is averaging 17 points per game for the Knights.

BYU has secured a verbal commitment from Jackson but the work is not done. The Cougars must continue to recruit him to make sure they don’t lose him.

When asked if he would consider an offer from a prominent school like Duke, Jackson said, “If something big came up, I might be interested. I think I’d definitely look into that for sure.”

But as for now, Jackson is sold on BYU. He doesn’t need to visit to other prominent programs to know what he wants.

Sometimes the best offer is the first one.