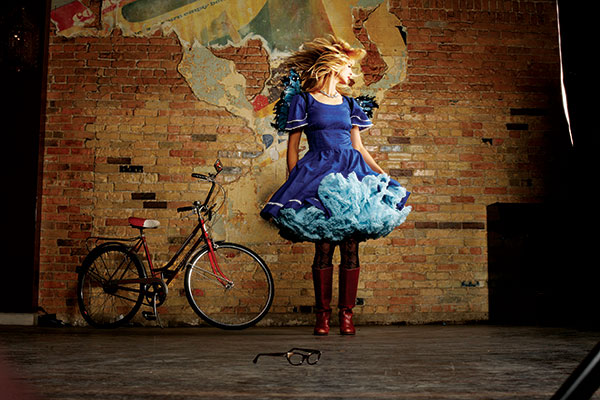 Mindy’s life is a whirlwind of songwriting, performing, styling and touring, but the high notes of her career are in the sound booth. “When I’m singing into an advanced microphone, it sends shivers through my whole body,” she says. “Pocketful of Poetry” is Mindy’s most recent release, which she describes as an “intoxicating amusement park ride through the candy-red View-Master world of childhood.” (Photo by Instudio/Kenneth Linge)

Although 32-year-old Mindy Gledhill is grounded in a love of music and a passion for Provo, her lyrics and fashion swirl with themes of flight and freedom. She owns multiple sets of wings (showcased in her “Anchor” music video) and recently grew butterflies from mail-order caterpillars with her three boys.

The high ceiling of her downtown Provo studio office is lined with clothes-pinned photos from far-flung adventures, salvaged from her grandfather-in-law’s files after decades as a tour guide. Mindy caught air with her own full-color, worldwide dreams by starting an international women’s creativity retreat — and yet this self-described introvert is also energized by staying home and drawing a daily bath.

The contrasting sides of Mindy show up in her concert decor with sparkly tights and Converse, cat-eye glasses and tulle, sequins and second-hand. Her wardrobe is primarily stitched of threads from the era of “Leave it to Beaver” and the Annette Funicello movies she grew up watching in her conservative, nine-kid Mormon family — but this musician prefers the lifestyle of 2014.

Women’s issues are first verse for Mindy, who could talk for hours about the topic, especially as it relates to the LDS faith.

“Mormon women are the strongest I know,” Mindy says. “In our Utah Valley culture, some women think their interests need to end when they have children, but that can be problematic later when they might have resentment about missing out. It’s healthy for kids to see mom doing something she loves and having interests other than living within expectations.”

Her borderless message shows up in track three of “Pocketful of Poetry” — “I can’t be held too tightly; my spirit quivers like a kite. But when you love me without strings, I take flight.” 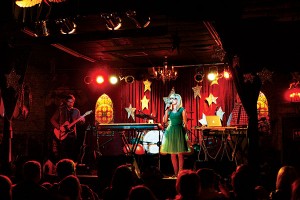 Mindy’s favorite performing venue is Velour on University Avenue in Provo. “I base my success after a show on how much fun I had, and I always seem to have a really good time at Velour,” she says. Mindy designed the set for her soldout Christmas concert at the 160-seat live music venue. (Photo by Instudio/Kenneth Linge)

Mindy released her fifth album in 2013, performed for more than 40 sell-out crowds last year and is instantly “liked” on her lively social media sites, but she heard a chorus of “no” at the beginning of her career.

After taking piano during elementary school in California, she spent three years as a mission president’s daughter in Spain. Then the Winkels moved to Utah, and Mindy became a Provo High Bulldog at age 16. She tried out for concert choir and didn’t make it. She auditioned for the dance team. Cut. She went out for the school musical. No can do. The pattern continued when she went to BYU. The Young Ambassadors and Latter-day Sounds (a fireside group) shut the door.

The first time she heard “yes” was when she was accepted into BYU’s music program and immediately switched from Spanish.

Mindy learned early on to be her own cheerleader and dreamwriter as she harmonized to the horn on the family van and with the hum of the microwave. She remembers lying under the piano to feel the vibrations as her older sisters practiced. But nobody was clapping for Mindy, despite forming her own band to perform in high school assemblies.

“I wanted voice lessons, so I took a job earning $5.15 an hour making smoothies at Nectar’s (in Powerhouse Gym),” she says.

“I did it for my own satisfaction — I was fascinated by recording,” Mindy says. This obsession also led her to Center Street for an internship in Nu Skin’s recording department, which had very little to do with music but everything to do with Mindy soaking up knowledge.

Mindy’s determination as a BYU media music major put her in front of a panel of judges who all gave her a thumbs down except for Jeff Simpson of Excel Entertainment. He tutored her in the music industry for the next 18 months, and in 2004 she released “Sum of All Grace” to an LDS audience. Mindy was in her early 20s and in her early formations as a businesswoman.

“It was exciting for me to watch all of the skills that went into producing, marketing and designing an album,” Mindy says.

So exciting, in fact, that she wanted to be involved in every aspect of bringing her music to the masses. Mindy’s second CD and first independent release was “Feather in the Wind” in 2007. She broke even on her first run —  and she’s been earning a living ever since.

“My husband is a self-employed entrepreneur, too,” she says. “I decided to take music seriously and not just as a hobby. I want to earn a living and support my family.”

Mindy has now released a total of four independent albums via her brand of vintage, quirky, colorful, bold, creative and feminine. Her company is known as Blue Morph Music (another butterfly reference), and one of her long-term dreams is to give flight to other artists with her passion for branding, styling and freedom from musical strings.

“I love owning music and being in control of all the decisions,” Mindy says. “Nobody has a greater interest in what I do than myself.”

Mindy’s tightly written lyrics and emotional melodies usually come to her in pieces — she sings melodies into her phone whenever they dance into her head.

“I also write lyrics on the walls with chalk,” she says. “Seeing the words projected on the wall gives me a different perspective and helps me know how I feel about them.” 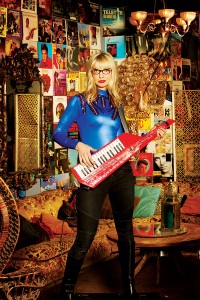 In Mindy’s true vintage fashion, she bought a used keytar off ksl.com from a seller in Ogden. Many of her clothes and boots come from Decades, a consignment store in Salt Lake City. Her passion for second-hand clothing leads her to rural Utah, where she says the pickings are less picked over than in Utah County. (Photo by Instudio/Kenneth Linge)

With grassroot followings from the Pacific Northwest to Arizona (and pockets in Asia), Mindy’s strategy includes getting in tune with her fans online. Mindy’s 2 million views on her YouTube channel is one of her proudest accomplishments.

“I don’t monetize on YouTube, but it helps to see a visual representation and it’s a connection to my music,” she says. “It helps fans see the message I’m trying to get across, and it’s another way for people to discover who I am.”

Mindy’s first international distribution deal was put together over MySpace and took her music into Korea, where she had a No. 1 single for two weeks on their version of iTunes (above Rihanna and Beyonce). Korea led to a distribution deal in Japan, where she’s toured and performed for her Asian fans who love “Crazy Love and “All the Pennies.”

“The Japanese love cute things, and my music and brand are quirky,” she says.

Asian music-lovers also love buying hard-copy CDs more than iTunes-loving Americans. On her Japanese tour, she performed in a seven-story record store in Tokyo and plans to return in 2014.

People on the bus

When she’s not planning flights across the ocean, she’s envisioning a cross-country tour in a yet-to-be-purchased bus. Her late-night thoughts swirl around her quest to find a bus that is both mechanically sound and totally cool. But she can take care of the latter.

“It’s going to be a tricked-out Pinterest bus,” Mindy says. She envisions sponsors for the restoration of the music mobile, which will be documented via social media. She can picture a storyline that includes taking her bus to elementary schools where kids could come on board and play with instruments and experiment with sounds and beat. 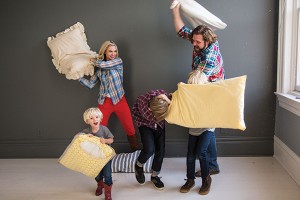 The Gledhill family experiences happy chaos with Mindy’s career. “Our life does not look perfect — neither my husband nor I have done this before and our situation presents challenges,” she says. Mindy’s husband is self-employed, and her extended family also includes entreprenerial sisters such as an art therapist, massage therapist, psychiatrist and photographer. Mindy’s inlaws own Cherry Lane Keepsakes in Provo. (Photo vyJustin Hackworth)

Mindy’s love of old things comes from her mom, who has turned an old hotel into a Victorian home in Mount Pleasant.

“They live on the edge of this cliff where people used to throw their junk in the 1950s,” Mindy says. “Now we go down and hunt for treasures.”

Although Mindy didn’t get her musical taste or fashion sense from her parents, she did inherit ambition and focus.

“When my mom has a project she wants to do, she’ll stick with it until the bitter end,” she says.

Mindy’s ambition includes raising three boys while raising the roof of venues around the West and in an upcoming cross-country tour. But she loves looking backward as much as forward.

“When I see my mom hold my babies and hum, I remember feeling the vibration of her voice on my own head as a child,” she says. “There’s something so familiar about it to me.”

Every Sunday, Mindy sets her schedule for the week and lets her assistants and nanny know her plans. Mindy keeps office hours away from home (usually MWF), but she tries to rhyme her roles by bringing her boys to musical appointments in Nashville or LA, for example. They’ve joined her on tour and were part of the cleanup crew at her December concert at Velour. She’s kicked around the idea of homeschooling the boys to accommodate a longer tour schedule.

Mindy’s digital friendships have no boundaries, but her tight-knit Provo bonds are part of her success formula. Bloggers, photographers, musicians, restaurateurs and artists feed off each other’s success and build on each other’s brands.

“After Stephanie Nielson’s plane crash in 2008, we all came together,” Mindy says.

Mindy is one of the co-founders of Provo’s Rooftop Concert Series and regularly shows up in real life and on social media with Provo’s other big names, including blogger CJane, photographer Justin Hackworth and artist Caitlin Connolly.

“There’s a special moment in time in Provo right now,” she says. “The synergy has been huge for my career.” 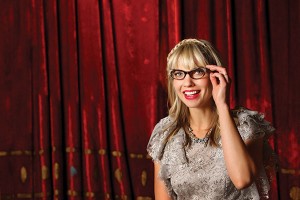 Mindy feels comfortable on Velour’s stage, which is backed by a curtain that came from the old Provo library. Mindy is less comfortable with what she sees as a shortage of Mormon women who’ve made it in mainstream music. She’s eager to foster relationships with other artists and is often asked for tips. “My biggest piece of advice is to go to workshops to showcase their music and to meet people. I’ve never walked away empty-handed. I’ve made important connections, and every single time it has led to me making money somehow. Going to workshops is an important step for networking and building confidence.” (Photo by Instudio/Kenneth Linge)

A world of difference

Built on her Provo foundation, Mindy takes a handful of creative women across the world. VagabondCreativeSociety.com will host its second international retreat in 2014 to foster creativity and international awareness.

“Women wear a lot of hats, and the well can run dry really fast,” Mindy says. “Our retreats fill that creative well for women.”

Twelve attendees snatched up the available spots for the first event in Morocco, held in October 2012.

“We were all strangers and became so close over the experience,” Mindy says.

Mindy taught a workshop on paper marbling and another on tapping into creativity — “We did ‘soul’ work,” Mindy says.

Mindy bares her soul and her sass through her toe-tapping songs and at mindygledhill.com.

Supersize us: Lessons from my big, fat Mormon family Next post

A Servant Heart for the Holidays: Christmas and nondenominational Christians