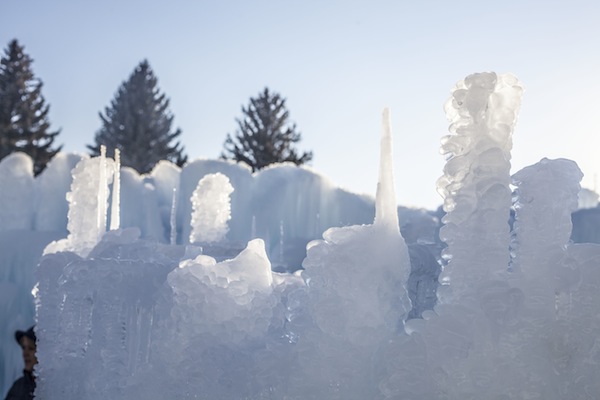 The top of the ice castle wall shows the complex process at work. The ice castle’s walls are like rings of a tree, said its creator Brent Christensen, with layers upon layers of ice creating the structure. (Photo by Bethany Davis)

MIDWAY— Glistening in the clear cold of a January afternoon, a huge structure built entirely from ice looms above Midway’s Main Street. Crowds wend their way through mazes of frozen slot canyons and knobby ice caverns. Is it a transplant from a frozen planet? A set piece from Disney’s Frozen?

Step into the Midway ice castle — one of three ice castles across the United States designed by Brent Christensen this year — and you step into a frozen wonderland filled with the kind of magic that comes when imagination meets nature’s creative force.

The castles have been an annual labor of love for Christensen for more than a decade — but not always on such a grand scale.

Developing the art of ice architecture

When Christensen moved to Utah in 2000, he said his family was captivated by the snow, a novelty for California natives. His ice creations began as backyard igloos and over the years evolved to castles that look like something from a fairytale.

After a few Utah winters, Christensen said he decided to build a castle but learned quickly that a wooden substructure disintegrated to a soggy, splintered mess by season’s end.

A latticework of icicles — vertical bases connected by horizontal icicles — provided the breakthrough to take Christensen’s creation from a backyard igloo to an architectural marvel.

Christensen took his ice castle idea on the road: Zermatt Resort, Midway Main Street, and then to colder locations like Colorado and Minnesota. Last winter was the first time they expanded into multiple locations.

The endeavor has expanded from a one-man show into an enterprise employing at least 20 people in Midway alone. Last year was their first in multiple locations; this year there are three ice castles spread out among Midway, Breckenridge, Colo., and Loom Mountain, N.H.  Christensen said he hopes to add a fourth site in Minneapolis next year.

Christensen credits nature with the real creative power behind the castles.

“The canvas is me just kind of providing the place for this stuff to happen,” he said. “I didn’t do that — it was designed by a higher power. I’m careful to not take credit for any of this. We work hard, but really, we’re just tapping into a partnership with nature.”

Christensen’s childhood friend, Tom Rather, said Christensen has always been artistic, but instead of doodling motorcycles on church bulletins, now he’s creating castles of ice and snow.

“Brent’s always been artistic, and whatever he does, he does well,” Rather said. “I just look around, and this is Brent — it’s his artwork taken to another level, and it’s interesting to me because it’s just such off-the-wall type of artwork.” 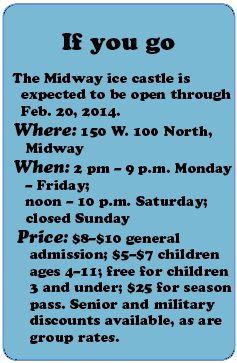 From icicles to ice castles

The road to building each ice castle is a long one, with planning for the next year beginning before the last icicle has melted away on the current castle. Actual onsite groundwork begins in October, with teams working for a month to install the plumbing and electrical infrastructure needed to create the ice castles.

Then the fun begins.

“If you were to come four weeks ago, it would have been like a flat field with a bunch of icicles sticking out of the ground,” Christensen said.

Each day, Christensen and his team continue to grow the structure by building a latticework of icicles, spraying it with water, and letting Mother Nature do her thing, freezing the water into cascading sheets of ice or spiky icicles that look like stalactites. By the end of the process, Christensen estimated that the castle’s walls will stand upwards of 30 feet, with some of the now-open walkways being enclosed into icy caverns.

Inside each section of the ice castle is a complex system of scaffolding, platforms, and staircases for employee use — fashioned completely of ice.

To get enough of workable icicles, Christensen came up with the idea of spraying water on an icicle rack.

“Every place there is a cross on the rack, you get a perfect icicle,” he said.

The idea was a game-changer, providing him with 5,000 ideal icicles in a night.

“For a project this big, to grow it as fast as we’re trying to, you actually do need that many,” he said.

Innovations this year include water features — two waterfalls and a fountain — as well as LED lights embedded deep within the ice that create an otherworldly glow in the dark of night.

Returning to the castle’s Utah roots after a few seasons away has been wonderful, but Christensen said it’s up to Mother Nature if they’ll be able to keep coming back to Midway in the future.

“It’s a roll of the dice with Utah because of the weather,” he said. “If it was like this every year, there would be no question about coming back — no question — but there’s been years when it’s just literally not cold enough. Two winters ago we would have never, ever even opened.”

Meanwhile, Christensen will escape to warmer weather when the season wraps — he and his family now live in Kauai, Hawaii. But Christensen doesn’t stray too far from his passion for water, albeit in another form: surfing in the Pacific.