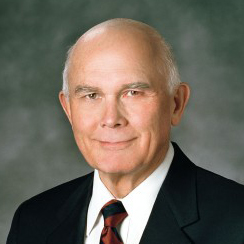 Elder Dallin H. Oaks, a member of the Quorum of the Twelve Apostles for The Church of Jesus Christ of Latter-day Saints. (Photo courtesy LDS church)

PROVO — The Utah Valley Chamber of Commerce has chosen Elder Dallin H. Oaks, a member of the Quorum of the Twelve Apostles for The Church of Jesus Christ of Latter-day Saints, and the late Ray Noorda as its Pillar of the Valley Award recipients for 2014. Elder Oaks and a representative for Noorda will be honored at the fourth annual gala on March 28 at the Utah Valley Convention Center.

“The contributions Elder Oaks and Ray Noorda made to the community and culture of Utah Valley is phenomenal,” said Val Hale, president of the Utah Valley Chamber of Commerce, in a press release. “As a Provo native and president of Brigham Young University for nine years, Elder Oaks, and Ray Noorda, founder of Novell a globally renown corporate brand, are truly timeless pillars of this great valley.”

In 2011, the Pillar of the Valley Award was created to honor local leaders who have positively influenced the business, civic, social, educational, and cultural climate in Utah Valley.

Elder Oaks served for nine years as the BYU president, but then was appointed to the Utah Supreme Court. While Elder Oaks intended to stay there for 20 years, he resigned after 3.5 years to serve an apostle for the LDS Church where he continues to serve today.

Noorda passed away in 2006, which makes him the second posthumously individual to receive the Pillar of the Valley Award. He is responsible for assembling the highly successful file sharing system called Novell NetWare. In 2005, Noorda was inducted into the Junior Achievement U.S. Business Hall of Fame.