SPANISH FORK — Five individuals are dead in what police called a quadruple homicide/suicide in Spanish Fork.
Spanish Fork police believe Joshua Boren, 34, who worked for the Lindon Police Department since October, shot his wife, two kids and mother-in-law before killing himself, according to Spanish Fork Police Chief Steven Adams.
Police identified the victims as Kelly Boren (32), Joshua “Jaden” Boren (7), Haley Boren (5) and Marie King (55, Kelly Boren’s mother).
“Everybody we’ve spoken to, including Lindon Police Department, this is a shock to them,” Adams said in a press conference. “They just were concerned that he hadn’t arrived for work.” 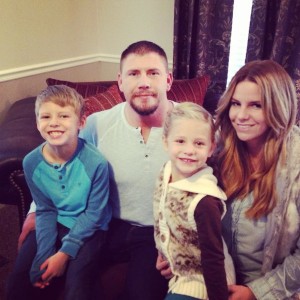 Joshua Boren was scheduled to work for the Lindon Police Department at 10 p.m. Thursday night. When he didn’t show up for his shift within the hour, Lindon police asked for the Spanish Fork police to do a welfare check to see what was keeping Joshua Boren from coming into work.

“If an officer is suppose to be on duty at 10 o’clock, he should be there at 10 o’clock,” Adams said. “It might not be like that in other businesses and employment, but if an officer doesn’t arrive on duty at the time he’s appointed, there is something amiss.”
Spanish Fork police officers arrived at the home and found suspicious activity: blood and bullet casings inside.

“They found that the door to the home was open, so they made entry into the home, hollering out for individuals in the home, trying to secure the residents, trying to figure out what had happened,” Adams said. “They determined that several individuals had passed away.”

Police called out investigators, the County Attorney’s Offices and other city agencies nearby were called out to investigate the crime scene.Some of the individuals the police have interviewed so far have said there has been some contention between Joshua Boren, who use to work for the Utah County Sheriff’s Office, and his wife Kelly Boren in the past. However, There has never been a service call there for any disturbances.While the exact time of the murder isn’t known, evidence shows that the last contact anyone had with Joshua Boren was at 4:30 p.m. on Thursday afternoon.

Adams believes it will be a few days before the police will be done investigating the home.
Share

Swimming in service: PG's Sheila Morrison has dedicated years helping Down syndrome and autistic kids learn to swim Next post