Sheila Morrison, who lives on the edge of Pleasant Grove bordering Cedar Hills and American Fork, opens her indoor, backyard pool twice per week for swimming lessons for kids with special needs. (Photo by Matt Bennett) 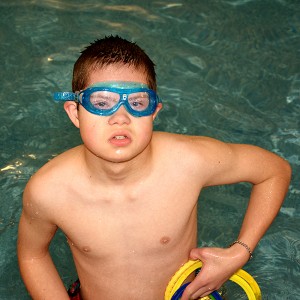 Cedar Hills resident, Talon Smith, has been taking swimming lessons at the Morrison’s pool since he was five-years-old. The first several years Talon refused to even put his head under water. Today he’s a skilled swimmer.

It may be the middle of winter, but one backyard pool in Pleasant Grove is full of warmth.

Each week, dozens of children enter the pool to improve their swimming skills during lessons from instructor Sheila Morrison. And on two evenings a week, the lessons are free of charge and the students are particularly unique. 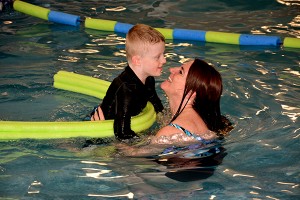 In some cases parents will jump in the pool with their kids, like Becky Fry and her son Bridger, seen here. (Photo by Matt Bennett)

Eight years ago, Morrison and her son launched a free swimming class for local children with special needs. The idea was sparked when Morrison’s son needed to fulfill eight hours of community service for a Boy Scout merit badge. The designated hours came and went, and now, years later, Morrison continues to serve by offering the classes to any special needs child who comes her way.

After 43 years of teaching swimming lessons, you might think Morrison would grow tired of the hours in the pool. And you might think she would be looking for payback for all the service she offers. But her love for teaching is constant and her payment comes in the form of happy, successful swimmers.

“I delight in watching them achieve things they’ve never achieved before,” Morrison said. “To take a child who is terrified of the water and watch them move from being afraid to now being confident — that’s what keeps me teaching. When I retire, I’ll still do the special needs classes.”

One of the 50 special needs children Morrison has taught is Bo Cummins. Cummins has autism and is almost completely non-verbal — he uses sign language to communicate. Though hesitant at the outset, Cummins now loves the water. He looks forward to the Thursday night program and can swim on his own. And he’s gained much more than swimming skills, thanks to the talents of his teacher.

“To have an instructor who was willing and patient enough to teach our kids and be tolerant of special quirks was awesome and relaxing for me,” said Shelly Cummins, Bo’s mother.

“I felt Sheila’s warm heart and patience the first time she met him. And having the swim night on a weekly basis throughout the year is huge for us. The consistency helps our kids progress and gives them the sense of belonging to something great. What Sheila does for the kids is beyond words of gratitude — we love her and all she does.”