Home Life Cancer in the rearview: Father of 2 kicks cancer to the curb

Cancer in the rearview: Father of 2 kicks cancer to the curb 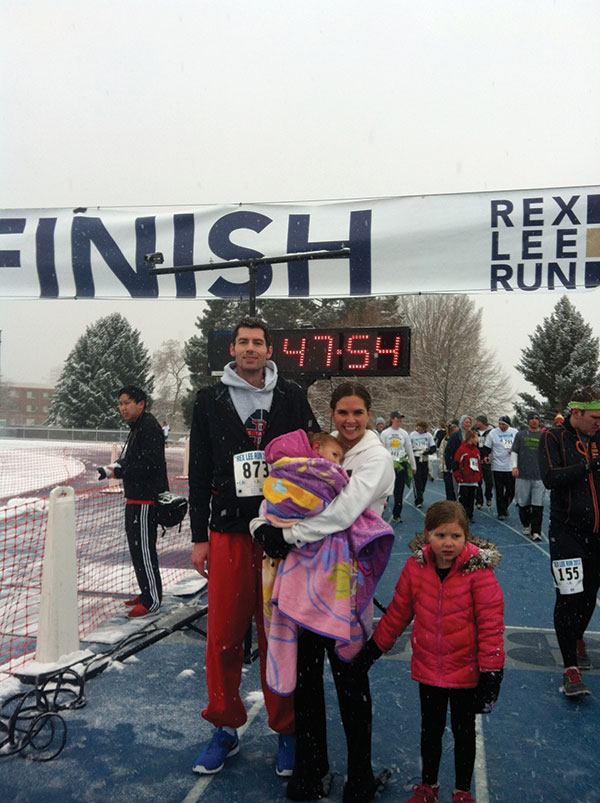 Wes Bell has undergone 12 chemo treatments and a year of surgeries — including removal of his colon. But this 30-year-old father of two celebrates everyday life and spreads awareness of colon cancer. (Photo courtesy Wes Bell)

Wes and Megan Bell rang in 2014 with gratitude.

Nearly two years ago, Wes Bell was diagnosed with stage 3 colon and rectal cancer. A year of surgeries and six months of chemotherapy put him in remission, and on Christmas Eve 2012 he was released from the hospital at 9 p.m. on a feeding tube.

In other good news, Wes’ yearly CT scan and blood test came back normal and clean last month. But life will never be the same for these BYU grads who now live in Traverse Mountain with their two children.

“Because Wes had two different cancers, they removed his whole colon so he is only left with his small intestine to digest his food,” Megan says.

But his complicated plumbing hasn’t changed his heart. In September, this 6-foot-5 athlete picked up a basketball and shot around for the first time since his diagnosis. Wes redshirted on the UVU team before playing a year of basketball at Dixie State.

“It was such a part of who he was before cancer that it was really great to see him feel well enough to get on the court,” Megan says. “His doctor is determined to get him playing again to help him feel more like his old self.”

The cancer has withered Wes from 200 pounds down to 160 pounds because having no colon makes it tough to gain weight, but Wes conquered the Rex Lee Run in March 2013.

“It has been incredible to watch him slowly take his life back, get back to work, get back to playing basketball, and get back to being the kind of father he was before his diagnosis,” Megan says.

And in some ways, Wes is better than he ever was.

He’s now involved with the Colon Cancer Alliance’s “Never Too Young” campaign, and he also fulfilled a dream to travel to Europe with his wife.

“All it took was a cancer reality check to give us the final push to do it,” Megan says.

The New Year’s resolutions for Wes are to stay cancer free, to help other young people diagnosed with cancer, and to enjoy the perspective cancer has given him of how precious everyday life is.

“My husband is our family’s superman because he has saved so many from a fate you would never wish upon your worst enemy,” Megan says. “This is a treatable cancer if it is caught early enough. We love to share that message of health and hope with the