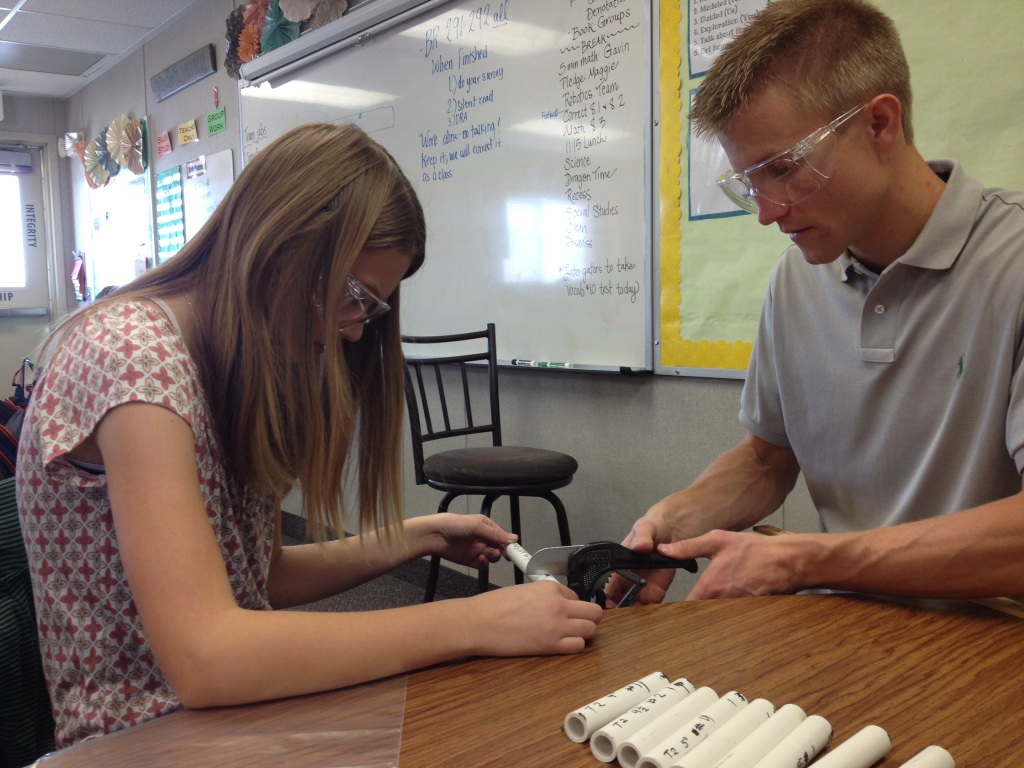 BYU mechanical engineering Ph. D. candidate Brett Stone assembles a robot with a sixth grade student at Snow Springs Elementary School in Lehi. The school is one of 12 in Utah that is participating in the SeaPerch program. (Photo courtesy Mallory Stone)

Dr. Tadd Truscott learned about an educational outreach program called SeaPerch while he was a student at MIT. He believed it was a great idea. So when he became an assistant professor at BYU, he found a way to bring it to Utah County.

“The program has been working for a long time, and I’ve always admired it,” Truscott said. “Here in Utah there was nothing quite like it.”

SeaPerch was created by the MIT SeaPerch Grant College Program. It gives kids the resources to build underwater robots and, in the process, nurture an interest in science-related careers.

Truscott wrote a small grant, requesting funding for a version of the program that integrates BYU engineering students (and the robotic parts they make) into the program to teach the students. This is the program’s second year in Utah.

SeaPerch is appealing to middle schoolers because it has a measurable, appealing end goal: build a robot. But it’s great also for teachers and parents, who want to see their kids engaged and having fun learning.

“I don’t think we put the word ‘fun’ with science enough,” said Mallory Stone, a sixth grade teacher at Snow Springs Elementary School whose class is participating in SeaPerch. “We associate science and math with ‘hard.’ But now that the kids have seen it in a fun way at a young age, maybe they will seek out other ways to learn more.” 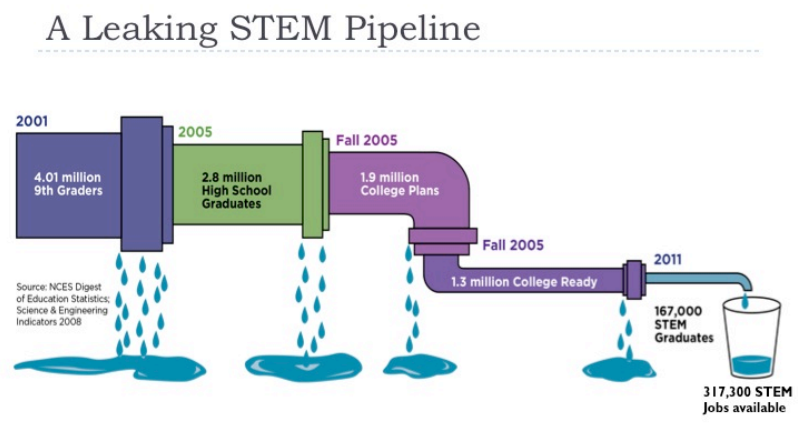 Careers in science, technology, engineering and math (STEM) are plentiful, but there aren’t enough qualified workers to meet the demand. (Photo by NCES Digest of Education Statistics; Science and Engineering Indicators 2008)

Stone’s school is one of 12 Utah and Davis County schools participating in SeaPerch this year. Some schools—like Stone’s—are integrating it with the curriculum, while others use it as an after-school activity. Students from all the schools will come together in April for the SeaPerch Challenge, a one-day design competition where students will use their robots to retrieve objects from the bottom of a swimming pool.

“We give them ten minutes to do it,” Truscott said. “Last year the winning time was two minutes 30 seconds. We thought, ‘Whoa! We need to make this way harder.'”

That success is encouraging. Since the program aims to identify and encourage future professionals in science, technology, engineering and mathematics—or STEM to educators—generating early success and enthusiasm for engineering is a good sign.

“These careers in STEM fields are so important, and we are trying so hard to keep students interested in them,” Stone said. “We want to get them college bound before they even start high school.”

SeaPerch shares Stone’s goal. In coming years, Truscott said, they hope to expand the competition beyond obstacle courses and swimming pools, perhaps into local lakes for cleanup or even to Yellowstone Lake to explore underwater geysers. In these environments, students would work directly with STEM professionals.

“The long-term goal in our lab is to get second- and third-year students working with biologists, geologists, environmentalists—people that use robots in their work,” Truscott said. “That’s the idea, in the long run, to get middle-schoolers to work with people in these professions. You can imagine how incredibly cool it would be to bring these middle schoolers to put their robots in Yellowstone Lake, and the information they found would be great for geologists to use. Whether it’s possible or not, we don’t know. But that’s the goal.”

It’s a goal that SeaPerch can reach only if the program is well-funded. Truscott obtained a grant to start the program, which was helpful, but officials need sponsors to keep it going strong.

“We’ve been reaching out to the community, and we’ve received sponsorships from GoEngineer, US Synthetic, Blendtec and other local businesses,” Truscott said. “It’s not easy, but sponsors say ‘This is worth it’ when they come to competitions. People sponsor football teams, so we want to see if we can get them involved on this level.”

Relatively speaking, the program is inexpensive to run. A $1,000 donation can sustain the program in one school for a year. To donate to the program, contact a representative of SeaPerch at BYU. The students will thank you.

“When I told the students what we were doing and that BYU was involved, they were jumping up and down and screaming,” Stone said. “It was huge. We’ve adopted a motto in our class: ‘This is a once in a lifetime opportunity.’ They’re very competitive with each other and want to have their robots look really nice and to be able to pick up objects in the pool. But we say it all the time: no matter what happens, this is a once in a lifetime opportunity.”