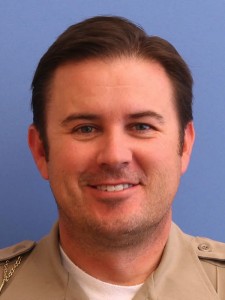 One officer dead, one critically injured

Jose Angel Garcia Jauregui, 27, went on a horrific crime spree through Utah and Juab counties Thursday, killing one officer and critically wounding another. Utah County Sheriff’s Sgt. Cory Wride was stopping to help what he thought was a stranded motorist on Thursday afternoon in Eagle Mountain when he was gunned down as he was ran the Jauregui’s information, according to the Utah County Sheriff’s Office.

Jauregui fled the area, but was spotted by a second Utah County Sheriff’s officer in Santaquin. Deputy Greg Sherwood started pursuing the suspect, but was shot in the head shortly after the chase began. He’s in critical condition at Utah Valley Regional Medical Center in Provo, after undergoing surgery.

Juaregui kept going, hijacked a vehicle in Nephi, crashed and got into a shootout with Juab County police. He was wounded and also taken to Utah Valley Regional Medical Center.

A 17-year-old girl was arrested Thursday night in connection with the shootings, but police haven’t released her name or what the connection is. Police released the name of the man who shot the officers in a Friday morning press conference.

A Provo High School teacher is accused of having a sexual relationship with a student. Donald Bills, 55, was arrested on several sex offense charges. Provo police say the incidents of sexual abuse happened during and after school with a 17-year-old girl.

A trial on sex abuse charges scheduled for convicted wife killer Martin MacNeill has been postponed. A judge this week determined there are questions about MacNeill’s mental health and delayed any further action until authorities can determine whether MacNeill can assist in his defense.

MacNeill was convicted last year in the 2007 death of his wife. He hasn’t been sentenced yet.

Orem police uncovered a counterfeit money operation after talking to two kids at University Mall. The kids, 12 and 13 years old, were stopped by mall security for trying to pay for items with fake money. They had three fake $50 bills.

Officers discovered they got the money from their parents, and arrested two men. A woman also faces charges in the case.

Orem police say a woman was knocking on doors asking to use the bathroom, but instead stealing from the homeowners.

A man told police he heard the woman rifling through his belongings after he allowed her to use the bathroom, and he noticed money was missing. He called police, who found the money, cited the woman and let her go.

About a half hour later, she knocked on the door of a police officer’s home and asked to use the bathroom. Again, the homeowner found her going through his things and handcuffed her. Police say she also broke into two cars.

The information on the murdered officer was updated at 1:05 p.m. on Friday, Jan. 31.

SPONSORED: LDS Father Prays For A Way To Lead His Children From Mental Illness To Wellness: The Result Is Simply Incredible Previous post