Just what the generous doctor ordered 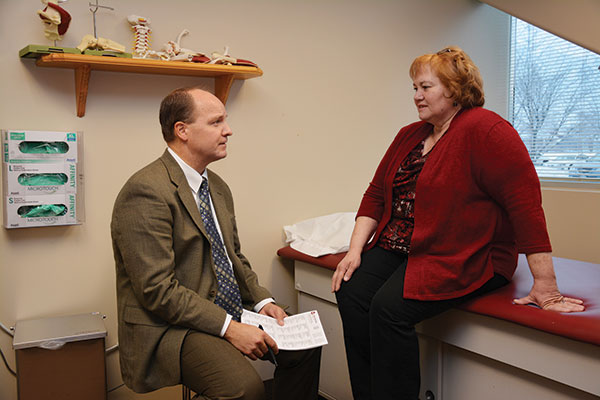 Lynette Mitchell is a giver. She cares for her husband who had kidney failure in 2010, including a year of taking him to a dialysis center and later being trained to perform dialysis at home. She also raises her teenage granddaughter who came to live with her at age 4. She works part time to pay the bills and still play nurse, but her life’s equation equals stress when it comes to money and time.

So when she fell 18 months ago and hurt her hip, she didn’t believe she had an option to add more medical bills to the thousands she was facing for her husband.

“A doctor told me about Community Health Connect, and I went right down and applied and qualified,” Lynette says.

Community Health Connect is a volunteer network of nearly 300 doctors and dentists in Utah County who donated $1.1 million in services in 2012 alone. The highly efficient organization coordinates access to health care for the uninsured. For example, Dr. Karl Weenig sees one patient a week from Community Health Connect in his orthopedic specialty clinic.

“I’ve had good mentors throughout my life who’ve done similar things, and I’ve desired to be part of that,” Dr. Weenig says. “I see people who want a good life and work hard, yet they have financial difficulties and can’t obtain medical care. We help them work toward their own American dream so they can become independent.”

Two-thirds of the Community Health Connect patients are Spanish-speaking.

“I miss a lot of what they say, but I do understand them at the end when they say ‘thank you,’” Dr. Weenig says. “And that expression makes it all worth it.”

Community Health Connect began in 1998 with Utah County residents who wanted to reach out to the indigent and coordinate medical care. Although doctors often provide charity care on their own, CHC organizes and simplifies the process.

“We do all the screening and qualifying, and then we setup appointments with participating providers,” says Starr Stratford, executive director of Community Health Connect. “Doctors and dentists tell us how often they are willing to see patients.”

The organization also reaches out to migrant seasonal farmworkers on the south end of Utah County by providing health education and health services — more than 600 were served in 2012 alone.