Married To The Music: Neon Trees bassist’s wife gives insight into their life together 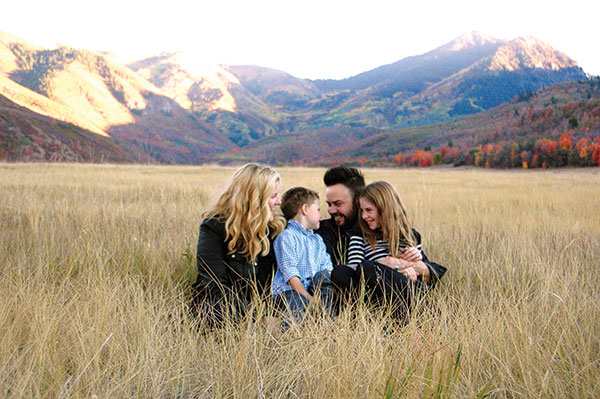 When Branden Campbell is on tour with Neon Trees, Emilie cares for their two children and also loves meeting up with friends for lunch, hikes and skiing. “When he’s back, my friends know it because I disappear,” Emilie says. “He and I spend all our time together making up for the time he’s gone. It’s fun. It’s like we’re dating.” (Photo courtesy Emilie Campbell)

You might think being married to a rock star is all about sold-out shows, red carpets and hanging with famous friends — and you’d be wrong. We turned to Emilie Campbell, wife of Neon Trees bassist Branden Campbell, to get a candid take on being married to the music.

Emilie and Branden grew up in Las Vegas and met in sixth grade. When they started dating in high school, Branden joined a band, and Emilie was by his side at every show — and she was just as passionate about music as Branden.

“I’m a classically trained pianist and a severe lover of rock and roll,” Emilie says.

The couple bonded over their love of good tunes.

These days, Emilie’s life is more about carpool than rock ‘n’ roll. She and Branden have been married for 13 years, they live in Cedar Hills and have two kids, Katie and Connor. Because Connor has catastrophic epilepsy and is also on the autism spectrum, Emilie also plays the role of advocate. She is active with organizations like Hope 4 Children With Epilepsy and other groups.

“Our life pretty much revolves around Connor — because he’s beautiful and perfect and we are obsessed with him,” she says.

Branden’s career has allowed the couple to make a difference on a larger scale.

“The name the band has made for itself has opened doors for us to spread awareness,” Emilie says. “I’m happy we’ve been able to raise money for the autism community in Utah Valley and further our efforts with epilepsy.”

Rock in a hard place

The hardest thing about being married to a musician? The travel.

“Branden misses out on a lot of things when he is on the road,” Emilie says. “It seems like whenever we have an emergency with our disabled son, Branden’s on the road.”

Through trial and error, Emilie has learned to find harmony in their crazy life.

“It’s a little easier now since I’m not supporting us both financially and mentally,” she says. “I have to be OK with him leaving all the time and not make him feel bad about missing things. Otherwise, we’d be arguing all the time.”

She also understands that touring isn’t a walk in the musical park.

“It’s a job,” Emilie says. “It’s hard work. It’s boring. It’s lonely. And things go wrong. The only time it’s really awesome is when the band is playing in front of thousands of people who are singing the words to all the songs — that makes up for the rest of the time … like when the tour bus breaks down, or equipment isn’t working, or the four hours they wait to do 20 minutes of promo at a radio station.”

Keep on rockin’ me baby

Emilie often goes out to meet Branden on the road. She and her daughter, Katie, recently visited him in Sydney, Australia.

“The travel experiences are helping us raise a well-adjusted daughter,” Emilie says. “It’s initiated a lot of conversations about how people live and what life is like outside of Utah.”

Emilie and Branden are teaching by example that you can create the life you want without sacrificing your belief system.

“I hope young people who look up to Branden realize he’s living his dream of playing music as a career, and he is still able to put family and faith first,” Emilie says.

Emilie remembers Sharon Osbourne giving her the advice to ignore what her husband does when he’s on the road.

“It was kind of like a ‘what-happens-on-tour-stays-on-tour’ mentality,” Emilie says. “But we don’t work that way.”

One rock ‘n’ roll couple Emilie does look up to is Paul McCartney and his late wife, Linda.

“They were married for 30 years, which is rare in this business, and they were very much a team,” Emilie says. “They hardly ever spent time apart.”

Coincidentally, Branden and Paul are both bass players and Emilie is a photographer just like Linda was.

“My advice to people married to musicians is to make sure you are equally as passionate about your spouse’s career or you may not survive,” Emilie says. “It’s a team effort, and it won’t work any other way.”

What stay-at-home moms REALLY do all day Next post