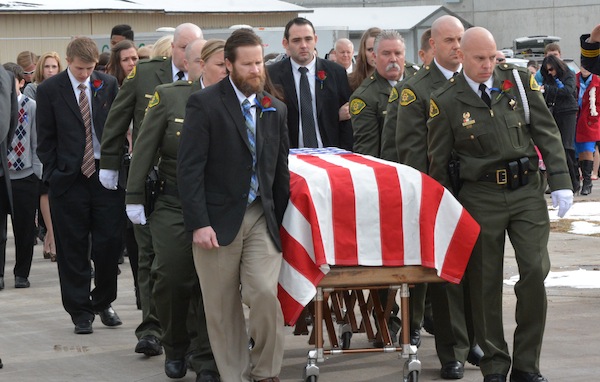 The pallbearers cary Cory Wride’s casket out of the UCCU Center after the Wednesday morning funeral service. (Photo by Rebecca Lane)

“(Cory Wride) willingly placed himself between evil and the ones he loved,” said Sgt. Eldon Packer. “Like many of those gathered here today, he understood the cost that could be required.”

Wride was shot and killed a week ago while helping what he thought was a stranded motorist. The driver of the supposed stranded car, 27-year-old Jose Angel Garcia Jauregui, shot Wride while he was sitting in his patrol car.

“(Cory) was such a private person,” said Johnny Revill, family spokesperson and Cory’s brother-in-law. “There are so many stories that we’re hearing now that we didn’t know before, and it’s even strengthened our relationship with Cory.”

Co-workers and family members shared their memories of Wride. He was remembered as an outdoors man; a loving husband, father and brother; and someone who always looked to do good.

“I want you and your family to know how much I enjoyed my time with Cory, and I appreciate you allowing me to have it,” said co-worker and friend Deputy Shawn Radmall to Cory’s family.

Sheriff Jim Tracy talked about the cost of freedom. In January this year, there were six police officer deaths in the United States outside of Wride’s.

“It is not how Sgt. Wride and the others died that made them heroes, it is how they lived and there willingness to serve and sacrifice that makes them heroes,” said Sheriff Jim Tracy.

Gov. Gary Herbert was one of the speakers to thank Wride’s family for their sacrifice.

“We thank Cory and his family for the service and sacrifice that has been rendered,” Herbert said. “We’re better off because of the service, the sacrifice of Sgt. Wride.”

During the funeral, Sheriff Jim Tracy announced they had just received news before the funeral began that Deputy Greg Sherwood, the other officer shot in Jauregui’s shooting rampage, had gotten out of surgery and was doing well. He was Skyping with people attending the funeral and is expected to recover from the gunshot to the head.