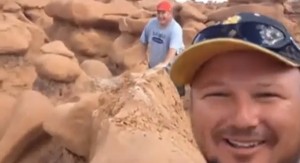 Glenn Taylor and David Hall were charged this week for toppling a rock at Goblin Valley this past summer. (Photo courtesy YouTube)

Child attacked while walking to school

An 11-year-old girl was sexually assaulted while walking to Cherry Hill Elementary School in Orem, on Wednesday morning.

Police say the man forced her to walk to a church parking lot where he assaulted her. She got away and ran to school, where she told her teacher what happened. The suspect is in his late teens or early 20s. He was wearing a black baseball hat and a gray hoodie. Anyone with information about the assault is asked to call police at (801) 229-7070.

Girl involved in police shooting may remain in detention

Prosecutors have asked that a 17-year-old girl involved in a deadly crime spree last week remain in detention while they decide what she’ll be charged with and whether to seek adult charges against her.

The crime spree spanned Utah and Juab counties and resulted in the shooting death of Utah County Sheriff’s Sgt. Cory Wride, the wounding Utah County Deputy Greg Sherwood, a carjacking in Nephi and the death of the suspected shooter, Jose Angel Garcia-Juaregui.

Months after they filmed the destruction of a rock formation at Goblin Valley State Park, two Highland residents have been charged.

Glenn Taylor, 45, who is the one who pushed over the ancient sandstone goblin, is charged with criminal mischief.

David Hall, 42, who filmed the vandalism, is charged with aiding and assisting criminal mischief. The charges are felonies, and the two former Boy Scout leaders could face up to five years in prison and $5,000 in fines. They also could be forced to pay restitution for the damage they did.

Accused baby shaker Robbie MacDonald is scheduled to face a jury Sept. 15, 17, 18 and 19. Police say MacDonald shook his girlfriend’s 10-month-old baby so hard that the boy is now blind.

MacDonald was charged in the case a year ago.

A student at Lehi High School will likely be charged after taking a pellet gun to school on Wednesday. Another student saw the gun and told an adult, and school officials found him before the school had to be locked down.

He reportedly said he took the gun to school to sell to another student.