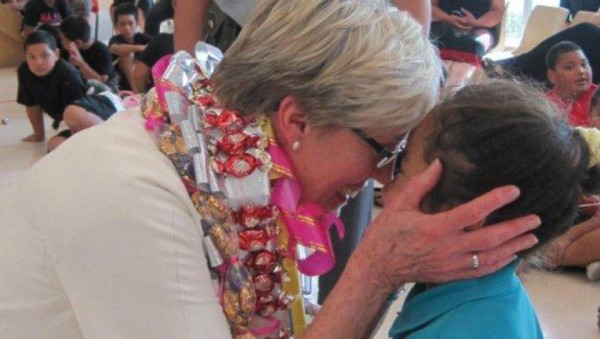 Sister Wixom told my Primary class that it’s her job to “pray for and love and take care of all the children in the world.” (Photo courtesy Mormon Newsroom)

When our ward Primary president told me that Sister Rosemary Wixom, Primary general president, was going to be visiting our ward, I was excited.

When she told me Sister Wixom would be visiting MY class. I was still excited.

I mean, there was really nothing to worry about. I knew from listening to Sister Wixom speak that she’s a sweet lady who loves little children. I knew that, as long as I was prepared, she would think anything we did in class was wonderful.

I knew she wasn’t there to see me teach last Sunday. She was much more interested in the children, and that’s the big takeaway for me. But I like to think she learned a few things from her visit, too. Here’s my best guess at what anecdotes she might have taken from our Texas ward back to Salt Lake City.

As luck would have it, it was our turn to do opening exercises that week, and I didn’t know it because I had been out of town the previous week. So when I arrived in Primary after a sweet, uplifting walk down the hall alongside Sister Wixom (who didn’t even know I was a Primary teacher at this point — she’s just that kind) I found almost half my class sitting in the front of the room. One chair was empty — the one that said “Prayer.”

Apparently sweet little Samantha was assigned to give the prayer but decided at the last minute she wanted to give the scripture instead (because it starts with “S,” obviously). But someone else was already prepared with the scripture. Samantha’s emotions escalated from disappointment to hysterics in a matter of seconds — because, you know, #fouryearoldproblems. Then little Joey stepped in for her and gave a homerun of a prayer. That boy had learned how to pray, and that preparation came in handy. Nice work, Joey.

Lesson #2: There’s room for everyone in God’s kingdom

…And room for everyone in our CTR4 class, which happens to be humungous. We already sit on the longest row in Jr. Primary, but we spent singing time shifting and bringing in extra chairs after Samantha recovered and everyone who helped with opening exercises came back. When more children want to be part of Primary, we just bring in more chairs. 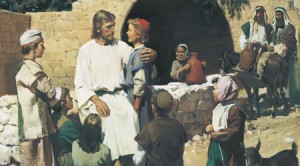 I taught the class that Jesus Christ loved little children, but this photo caused some confusion among the CTR 4s. (Photo courtesy LDS.org)

Lesson #3: You can’t draw a picture of Satan

Things went really well when we got to class. There was no sign of Sister Wixom yet, but we proceeded with an uncharacteristically fantastic conversation about the war in Heaven and each child’s decision to choose Jesus Christ. They got really excited when we got to the part of the story where they chose to follow Heavenly Father or to follow Satan. They were so excited, in fact, that they all wanted to tell me who they were pretty sure they chose. “I chose Jesus!” Samantha cried. “I chose Jesus, too!” from Isabella. Then “I chose Jesus!” from Joey, and on and on down the line until every child had declared allegiance.

Sister Wixom came in just as Jacob, the tiniest, barely 4-year-old in the class, announced that he, too, chose Jesus. It was time to switch gears and talk about how Jesus wants us to use our agency to choose the right. I was putting up a picture of Jesus holding a child on his lap when already 5-year-old Ethan called out, “Wait, after we chose, what happened to Satan?”

Sister Wixom looked at me.

“Well, he’s here, trying to make us do bad things,” I said. “But we’re going to talk about Jesus today, and how he wants us to choose the right.”

“Wait, he’s here?” Ethan asked. “Is he the one in the red hat?” He pointed to the picture.

I can’t really remember what I said next — something like no, no, no, you can’t draw a picture of Satan because he doesn’t have a body, but he’s here, just not like here here, but let’s move on. (At this point, I’m just praying Ethan doesn’t think Jesus holds Satan on his lap all the time, or that Satan hangs around little kids.)

I tried to switch gears after the Satan comment. I knew having Sister Wixom in our class was a once-in-a-lifetime thing, and I wanted the children to remember it.

So I told them we had a Very Special Visitor and asked Sister Wixom to tell them what her job is.

“My job is to pray for and love and take care of all the little children in the whole world,” Sister Wixom explained in her soft, sweet voice, looking each child in the eye as she spoke.

Then I asked, “And of all the children in the world, guess who she came to check on today?”

Sister Wixom made her eyes wide and pointed at each child as they sat in silence and stared back at her, wide-eyed.

And then, bless her heart, little Isabella got the biggest smile on her face. She started to squirm like she was feeling something so big she couldn’t contain it in her little 4-year-old body. She burst out, “I love you!”

That’s when I knew I was learning a lot more from the children than they are learning from me. I also knew Sister Wixom had known that little fact all along.

Queen of the Castle: Kate Carter tells her once upon a time Previous post

Yoga pants and opposite armrests equal Valentine's romance Next post