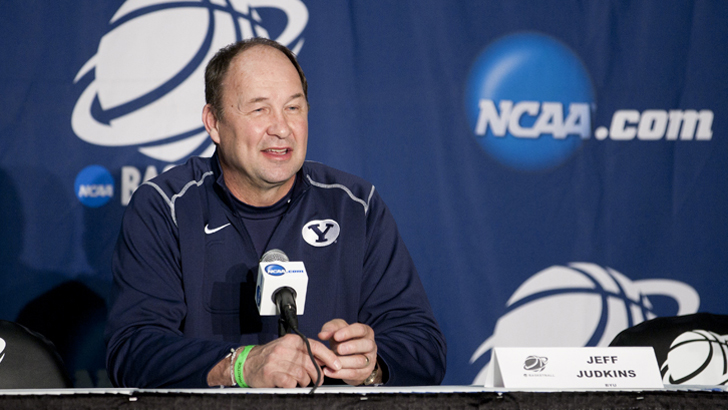 Jeff Judkins is one of the most underrated coaches at BYU.

Because women’s basketball doesn’t receive much attention, many people tend to overlook him. But Judkins has quietly guided the Cougars to four consecutive 20-plus win seasons, and BYU is currently one win away from his fifth straight 20-win season.

During his 13-year tenure in Provo, Judkins’ teams have reached the NCAA tournament multiple times, including a Sweet 16 appearance in 2002, his first season as BYU’s head coach. It was the Cougar women’s first, and only, Sweet 16.

While Judkins is the winningest coach in BYU women’s basketball history, he is so down-to-earth that everyone around the program simply knows him as “Juddy.”

He is such a good ambassador for BYU, you almost forget that he started his career as a Ute.

Judkins starred as a player at the University of Utah in the 1970s before being drafted in the second round of the NBA draft by the Boston Celtics. He was taken in the second round, one round after the Celtics selected some guy named Larry Bird. Juddy played for a few seasons in the NBA, including a stint with the Utah Jazz. 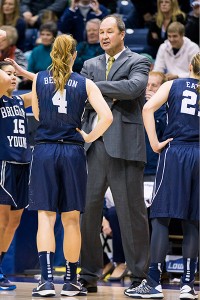 Jeff Judkins talks to his team on Dec. 14, 2013 in a game against nonconference rival Utah. (Photo by BYU Photo)

Judkins began his coaching career at Utah, where he helped Rick Majerus turn Utah into a national contender. He established a reputation as a great recruiter — he played a big role in the recruitment of Keith Van Horn, Andre Miller, Alex Jensen, Britton Johnsen and Michael Doleac — and a smart X’s and O’s guy.

Judkins always longed to be a head coach, but because he wanted to keep his wife and children in the Beehive State, he found it difficult to land a head coaching job. Then in 1999, Judkins decided to leave Utah to become BYU’s director of basketball operations —  a decision that stunned his friends and Utah fans.

“I had lot of fans tell me I was a traitor,” Judkins recalled.

While he is a fierce competitor, Judkins is approachable, even-keeled, and has a great sense of humor. Those attributes translate well when it comes to coaching a women’s basketball team.

While basketball is basketball, there’s a difference between coaching men and women.

For example, in 2000, his point guard, Julie Sullivan, got pregnant and had to miss that season.

“I didn’t know how to handle it at first,” Juddy said. “It was a different thing for me. On the men’s side, you don’t worry about that sort of stuff.”

Judkins could regale you for hours with stories from his playing and coaching days. 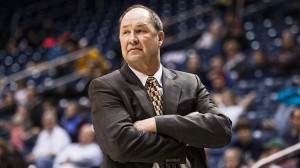 While it’s true Jeff Judkins took some razzing from NBA teammates for his religious ways, in the end he was respected for his beliefs. (Photo by BYU Photo)

One of my favorite stories comes from when he was an NBA rookie with the Boston Celtics.

It was in the late 1970s, and during a commercial flight — teams didn’t have charters like they do now — Judkins sat in first class with his Celtics teammates, who knew he was a Mormon.

Suddenly, the plane hit turbulence and began bouncing violently in the sky. The pilot ordered passengers to fasten their seatbelts and get into a tuck position.

“We may have to make a crash landing,” the pilot warned.

At a time like that, people tend to take stock of their lives. And that’s what was going through Judkins’ mind as he sat folded over in his chair.

“I started thinking about a lot of things, like, will I make it back home?” he recalls. “Will I see my wife and family again?”

Judkins closed his eyes and said a little prayer.

“What are you guys doing?” Judkins asked.

“Judkins,” came the reply, “we know you’re not going to die, so we want to be as close to you as possible.”

The plane landed safety and the experience reminded Judkins about the impact of living the gospel has on others.

“I think it was a great example for me to realize that the way I lived the gospel,” he says. “They might have razzed me and might have bothered me, but when it came down to it, they respected me for what I believed.”

Judkins says several members of the Celtics were religious or interested in religion.

“Pete Maravich was one of them. He became a serious Christian. Dave Cowans became a very religious person. M.L. Carr was very religious. Chris Ford was a strong Catholic. There were a lot of guys on that team were quite religious. You don’t see that too often in the NBA. But it was a great experience for me to spread the gospel that way.”

Living Legends: 8 things to know before you go Next post